Review: The Darkness That Comes Before (The Prince of Nothing #1) by R. Scott Bakker 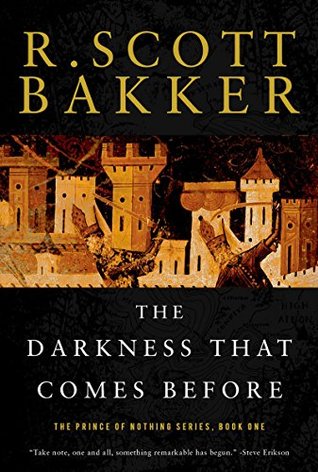 The Darkness That Comes Before (The Prince of Nothing #1) by R. Scott Bakker
The Overlook Press
Publication Date: September 2nd, 2008
(first published April 15th, 2005)
Paperback. 608 pages.

About The Darkness That Comes Before:
"The first book in R. Scott Bakker's Prince of Nothing series creates a world from whole cloth-its language and classes of people, its cities, religions, mysteries, taboos, and rituals. It's a world scarred by an apocalyptic past, evoking a time both two thousand years past and two thousand years into the future, as untold thousands gather for a crusade. Among them, two men and two women are ensnared by a mysterious traveler, Anasûrimbor Kellhus - part warrior, part philosopher, part sorcerous, charismatic presence - from lands long thought dead. The Darkness That Comes Before is a history of this great holy war, and like all histories, the survivors write its conclusion. "

The Darkness That Comes Before is one of those books that I've been wanting to read for years and I'm so glad that I finally did because I think I ended up liking it more than I expected to. I've seen this book referred to as one of the 'fathers' of the grimdark genre, and as a grimdark fan I knew it was something that I definitely wanted to read. It wasn't really what I expected in a lot of ways--and it certainly hasn't felt that grim yet!--but it also surprised me in a lot of great ways.

The Darkness That Comes Before is one of those book that sort of drops you into a world and story without providing much in the way of background and context, but it's done so in a way that teases just enough information to keep you hooked. These types of stories can be very hit or miss with me, so it was really satisfying to find that Bakker had executed this style in such a smooth and compelling manner. This is also one of those books that is somewhat dense in ways where I know that a lot of content and references are going over my head and that one day in the future, if I finish the trilogy, I know that revisiting the series and doing  a re-read is going to be an entirely different amazing experience. This series is going to be one that requires patience, but it's an enjoyable patience that I think allows me to really focus on and spend my time with each page and plot development that occurs.

This is a story centered around a religious war whose catalyst is the new Shriah of the Thousand Temples, Maithanet, a rather unknown figure cloaked in mystery and an extreme amount of power. People don't know the true identity of Maithanet, but everyone seems to know that he's a powerful new entity that's not to be messed with, especially when he declares the new Holy War. This announcement of war brings with it a renewed intensity of politics, controversy, and a myriad of other components that work together to create a truly remarkable story, or "history," as this book is described.

This story follows the multiple perspectives of the major characters of Achamian, Cnaiür, Esemenet, Kellhus, and Xerius III, as a well as a few we meet along the way, such as Serwë. I'm not sure how much detail I can really go into about each character because I feel as though there are a lot of potential subtle spoilers that can be given, but I will highlight that my favorite POVs to follow were Achamian, Kelhus, Cnaiür, and Esemenet--which I realize is a big chunk of the perspectives. Each of these characters has a very unique background and perspective, but each one brings so much intrigue and has an incredible compelling role in the story that made it hard not to want to follow them on each one's respective journey of sorts. They're all also incredibly grey characters and most of them do some pretty awful things and/or are actually pretty awful people, which is something that I tend to really enjoy in darker fantasy because it allows me to really get inside the head of some new, unpredictable characters and understand the world better as a result.

The world-building is so interesting--and I won't lie, a bit confusing at times with everything going on and the lack of any solid sort of info-dumping, but I love how Bakker has managed to develop this entirely new world in such a subtle yet obvious way. As I've mentioned, there's not much in the way of info-dumping, but at the same time you still begin to understand and get a sense for just how vast and intricately crafted this world is. There's still a lot of description throughout the book that helps to bring things to life and dives deeper into various topics. The magic system is also fascinating and has so much potential, but it's also one that's so complex that I'm not really sure how to succinctly describe it for this review so I won't attempt to, but it is one that I am eager to continue reading about because I have a feeling there's a lot more coming.

If you're looking for a fast-paced fantasy, The Darkness that Comes Before is not it. This story starts out slow, and although it does start picking up the pace as the story develops and we are introduced to more aspects of world-building and character development, it still has a slow start that is understandably difficult for people to want to get through. Since this book is centered around a soon-to-start Holy War, there is understandably a decent focus on the creation and exploration of the religious elements of Bakker's world, and this is not always the most exciting. However, if you do decide to pick up this book, I genuinely felt that although there was a slow start, the story and narrative only got better and better with each chapter and by the end of the book I would hazard to say that I think I love it.

I also want to quickly note that I think critiques about the lack of female characters and the fact that the main ones included are mostly prostitutes/slaves are fair and this is something that stood out to me as well. I'm particularly curious to see if Bakker improves anything with the rest of the trilogy, since so many people claim that his writing does improve as the trilogy continues and that some of these issues are improved upon throughout the rest of the trilogy.

I have no idea what to expect from future stories, but I know I am incredibly curious to find out. I've also got a copy of the sequel, The Warrior Prophet, all lined up and I can't wait to dive into that one soon! If you enjoy some darker fantasy, have the willingness to be patient for a payoff, and love a good story with depths and layers to it, then this is definitely one you should pick up. Overall, I've given The Darkness That Comes Before 4.75 stars!

Email ThisBlogThis!Share to TwitterShare to FacebookShare to Pinterest
Labels: grimdark, r. scott bakker, review, the darkness that comes before