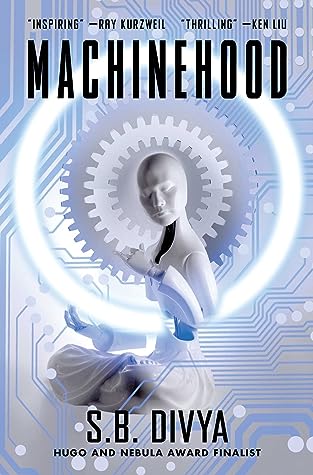 About Machinehood:
"Welga Ramirez, executive bodyguard and ex-special forces, is about to retire early when her client is killed in front of her. It’s 2095 and people don’t usually die from violence. Humanity is entirely dependent on pills that not only help them stay alive, but allow them to compete with artificial intelligence in an increasingly competitive gig economy. Daily doses protect against designer diseases, flow enhances focus, zips and buffs enhance physical strength and speed, and juvers speed the healing process.
All that changes when Welga’s client is killed by The Machinehood, a new and mysterious terrorist group that has simultaneously attacked several major pill funders. The Machinehood operatives seem to be part human, part machine, something the world has never seen. They issue an ultimatum: stop all pill production in one week.
Global panic ensues as pill production slows and many become ill. Thousands destroy their bots in fear of a strong AI takeover. But the US government believes the Machinehood is a cover for an old enemy. One that Welga is uniquely qualified to fight.
Welga, determined to take down the Machinehood, is pulled back into intelligence work by the government that betrayed her. But who are the Machinehood and what do they really want?
A thrilling and thought-provoking novel that asks: if we won’t see machines as human, will we instead see humans as machines?"

Machinehood is a fast-paced futuristic sci-fi with intense world-building and a compelling premise surrounding the role and rights of AI and machines. The story centers around Welga, an ex-military member who now works as a bodyguard, and Nithya, a scientist, two women navigating this world with two very different paths and goals. The story takes off when a rebel group begins violently advocating and demanding that AIs and machines be treated equally to humans with the same rights and privileges. If you, like me, find AI a bit creepy and don't trust it, then this book will be one you might appreciate.

Machinehood is set in a world in which machines and AI have become ubiquitous, and because of this is has become harder and harder for humans to be able to keep up. As a result, people have begun to take pills and other "enhancers" in order to improve their own abilities (better focus, speed, etc.), and the pills are a development that has occurred after already trying to physically alter human bodies cyborg-style, which apparently had terrible consequences. This is also a world in which a magnified form of social media also dominates everyone's lives. People can essentially broadcast their lives 24/7 if they desire and also have "tip jars" in which people can regularly donate.

Along with this is the fact that drones of all sizes are just basically...everywhere. I think the thing that most took me by surprise was the fact that the drones can essentially go anywhere and watch anything, so if you want to watch a random couple having sex, you can probably just fly into their room and do so. Apparently this has just become "accepted" and is no longer a big deal because anyone can do it, but it was such a minor yet intriguing aspect of the world-building and current setting that I couldn't get it out of my head. I think it says a lot about the impact of tech in this futuristic setting and what a permanent part of society it has become.

Machinehood is told in alternative perspectives between sisters-in-law Welga and Nithya. Welga's job intertwines a lot with a militant rebel group that actively moves against the usage of pills and other enhancers and takes extreme action and terrorist attacks to demonstrate. I appreciated Welga's confidence and ability to be both extraordinarily cautious and disciplined while at the same time somewhat throw caution to the wind and make some questionable decisisions, as this allowed her to feel like a more realized and developed character. I feel like there were a lot of nuances to her job that took me a little while to understand, but nonetheless it was entertaining to follow her different jobs.

We also follow Nithya's perspective, and I think I enjoyed Nithya's narrative a bit more than Welga's.  Nithya is a scientist whose work I'm not really sure I could accurately recount in this review, but I was so interested in her research and how she undertook her work. I also appreciated the more personal aspects of her life, such as some of her conflicts with her husband and her difficulties with her daughter and family. Despite my interest in these characters and their works, I never felt overly connected to either one of these characters. I don't need to feel connected to characters to enjoy a book, but in this case there was just a bit too much distance at times, especially with Welga's perspective. There was something about Welga's narrative that prevented me from being able to fully understand or predict her actions throughout the story.

I really enjoyed the different themes Machinehood explored in relation to AI, tech in general, future body-related technology, autonomy, and so on. I particularly liked Divya's exploration of these themes because she approached them from some angles I hadn't seen before that felt as though they actually brought something new to the table. There are a lot of sci-fi books out recently that tackle similar ideas of AI and futuristic tech, but it's harder to find one that present new conversations to explore, and Divya did just that. She does this not only through the actions of the AI in the book, but also through her characters' reactions to it and by showing the effects of different tech on the world itself.

Lastly, I'll touch on the pacing and ending. I found that there was a lot of heavy info-dumping in parts throughout the entire book that interrupted the fast-paced flow of the rest of the book. I don't mind getting information about a world and backstory because it helps me to better understand everything going on in the present, but in this case it just felt overwhelming at times. There is a lot of jargon throughout this book, as well as new ideas and systems that we have to quickly figure out in order to be able to follow along and actually enjoy the book. In regards to the ending of Machinehood, it felt just a little too wrapped up overall. I'm fine with some good resolution, but in this case things just felt a bit too 'out there' and I'm still not entirely sure how I feel about it all.

Overall, I've given Machinehood four stars! Despite the issues I had, when I look back on this book I find myself thinking about how enjoyable and interesting it was to explore. If you like sci-fi, futuristic stories, or AI, then be sure to keep this one on your radar.

*I received an ARC of Machinehood courtesy of the publisher in exchange for an honest review.*