Review: All the Murmuring Bones by A.G. Slater 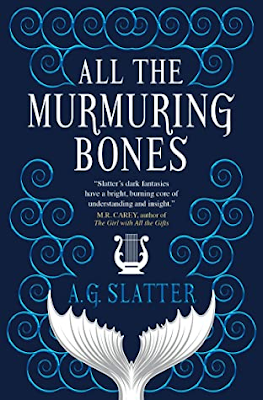 About All the Murmuring Bones:
"Long ago Miren O'Malley's family prospered due to a deal struck with the Mer: safety for their ships in return for a child of each generation. But for many years the family have been unable to keep their side of the bargain and have fallen into decline. Miren's grandmother is determined to restore their glory, even at the price of Miren's freedom.
A spellbinding tale of dark family secrets, magic and witches, and creatures of myth and the sea; of strong women and the men who seek to control them."

All the Murmuring Bones is a darkly atmospheric tale full of folklore and a captivating story about one woman as she charts her own new path from a rather grim life. This wasn't quite what I expected it to be, and if you're looking for a story with a lot of Mer presence, then this probably isn't what you're expecting either, but I still really loved this story for what it was and the inclusion of folklore and (supernatural) elements that made it deliciously dark and unpredictable and full of danger at every corner.

This is a tricky review to write because there's so much that I want to say, but for so many reasons I'm not sure how to say it, nor do I want to give anything away. It's not that this ia story full of twists and turns, but it is very much one meant to be experienced personally rather than told about. This story follows Miren O'Malley as she decides to take her life's path into her own path after some unexpected tragedies and the rather arduous, foreboding journey she takes to find answers about her past.

Miren is a woman that I grew to love and admire for a variety of reasons. She's a bit prickly, one might say, and is not exactly the most endearing person, but her self-imposed distancing of herself from others is a result of her upbringing where she needed to be strong and aware of those who may try to take advantage of her or her remaining family. I found her caution and determination to be some of the most compelling points about her--she is rightfully fearful of many things she encounters and other various threats that pop up, but she doesn't necessarily let this fear rule her in any overwhelming manner. Miren knows what she wants, she knows what she has to do attain, and she does not stop for anyone or anything. Her growth is subtle, but present, and I am grateful to have been able to accompany her on her journey that was beautiful and difficult and went to some exceptionally dark places at times.

The story is told entirely through Miren's POV, but interspersed throughout are small folklore stories that are essentially about the O'Malley family's history, especially in regards to their ties to the Mer. I loved how these stories were included and how much depth and layering they added to the world and story in general. Sometimes they were framed as stories being read by Miren's grandma, at times they were stories told by Miren to herself as a comfort, at times she told them to others, and in others she read them herself. If you like folklore stories and fairy tales, then I promise you will love this aspect!

This is one of those subtly creepy books where everything just feels... off. There's something abnormal about the setting and the people and you can't always put your finger on what it is, but you know that presence of unnaturalness is present and is as much a character in this book as the people are characters. If I were to compare it to anything, I would say that some of the feelings/vibes I got from this book reminded me of ones I got from Mexican Gothic by Silvia Moreno-Garcia (though don't take the comparison too seriously, as they are fairly different stories) and I think if you liked one, you will like the other.

All the Murmuring Books has a slow, careful narrative that isn't one you'll rush through because of the intense action scenes, but rather one you'll rush through because you just can't help but feel a desire to know what unpredictable and likely slightly disturbing thing is going to happen next. I will say that this book had a slower start that took me a little while to get into, but once I got a couple chapters in, I was hooked and wouldn't have stopped reading this book for anything.

Lastly, I wanted to leave quick note that I learned after reading All the Murmuring Bones. This story is apparently set in the same world that Slater has written other short stories in and some of the folklore stories we get in this book are drawn from her other stories. I hadn't read any of Slater's works prior to this and I don't think I had any issues diving into this one, so I wouldn't hesitate to read this book at all in case you have heard something similar. (The benefit is that it means I need to read more of Slater's work now!)

Overall, It's five stars from me! If you need a dark folklore-esque tale to round off the winter season (or any season works, really), then you should be sure to check out All the Murmuring Bones.

*I received an All the Murmuring Bones courtesy of the publisher in exchange for an honest review.*

Email ThisBlogThis!Share to TwitterShare to FacebookShare to Pinterest
Labels: a.g. Slater, all the murmuring bones, review