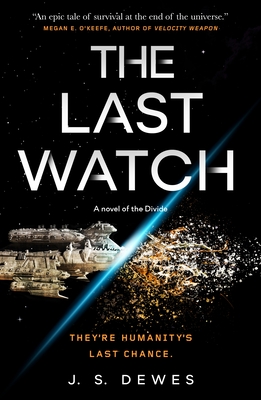 The Last Watch by J.S. Dewes
Tor Books
Publication Date: April 20th, 2021
Paperback. 480 pages.
About The Last Watch:
"The Divide.
It’s the edge of the universe.
Now it’s collapsing—and taking everyone and everything with it.
The only ones who can stop it are the Sentinels—the recruits, exiles, and court-martialed dregs of the military.
At the Divide, Adequin Rake, commanding the Argus, has no resources, no comms—nothing, except for the soldiers that no one wanted.
They're humanity's only chance."

The Last Watch is a fast-paced and thrilling space adventure that is full of heart and excitement at every corner. This was a hugely enjoyable

The story kicks off when Cavalon Mercer is sent to the Argus, a spaceship commanded by Adequin Rake, set essentially at the edge of the galaxy near what's known as the Divide. The Divide, however, has started to collapse, which would quite literally mean the end of humanity as we know it, and this is where all of the problems seem to begin. As the story continues on with Cav and Rake, we begin to slowly unravel more and more about the world-building--which was executed brilliantly and in an incredibly captivating manner--and some secrets that are infested within the governmental structure of the world itself and that Cav and Rake are intricately woven into.

The entire premise of The Last Watch is fascinating, but I think what really set this book apart and made it such an exceptionally enjoyable read for me were the characters. Cav and Rake are the two perspectives we switch between and I found myself so connected to them and involved in their roles. Cavalon appears to be a bit of a troublemaker (and smartass), but in reality he's sort of a sweet, pure of heart person just trying to find their way in the world. He hasn't had a great time of late, which is how he ended up on the Argus with the rest of the unwanted and troublemaking soldiers, but it's where he finally begins to discover his worth and contribute to something he never could have expected. His humor and personality really helped make this book such an enjoyable read, and it also made it feel relatable and comforting in a way--I think we could all relate to Cav for one reason or another.

Rake appears as the opposite of Cav--strict where he's more seemingly nonchalant, obedient where he is often always looking for bends in the rules. At heart, however, Rake is just trying to do her best to be the best commander she can be while protecting her soldiers and taking care of her duties on the Argus, all while trying to keep her heart in check. Cav and Rake make an extremely unlikely friendship, but it's also the best dynamic and slow build of trust and affection that I've seen in a while.

There are many other characters accompanying Cav and Rake on this journey and all of them are equally well-developed and bring some special to the story. I really found myself caring about all of the characters, no matter how big or small their role was. I liked seeing how all the different roles worked together under stress, how everyone handled things and knew when it was time to do whatever it would take to survive, even if the option at hand wasn't exactly going to be popular.

There are times when the sci-fi aspects got a bit confusing when explained, or when some of the background and world-building was a bit too much, but for some reason it really didn't bother me. I loved reading about everything, even if I didn't fully understand it, if that makes any sense.

Overall, I've given The Last Watch five stars because I really can't think of anything I didn't enjoy. I enjoyed the heck out of this book and am already impatient for the sequel. This was an adventure full of fear, hope, humor, heart, and a bunch of great personalities that made everything go down easier.

*I received a copy of The Last Watch courtesy of the publisher in exchange for an honest review.*