Review: Near the Bone by Christina Henry 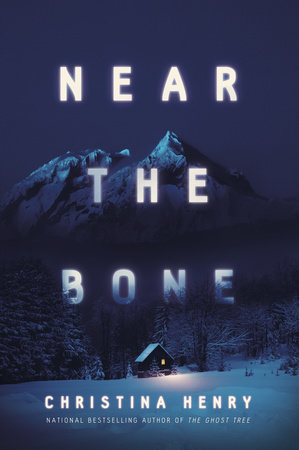 About Near the Bone:
"A woman trapped on a mountain attempts to survive more than one kind of monster, in a dread-inducing horror novel from the national bestselling author Christina Henry.
Mattie can't remember a time before she and William lived alone on a mountain together. She must never make him upset. But when Mattie discovers the mutilated body of a fox in the woods, she realizes that they're not alone after all.
There's something in the woods that wasn't there before, something that makes strange cries in the night, something with sharp teeth and claws.
When three strangers appear on the mountaintop looking for the creature in the woods, Mattie knows their presence will anger William. Terrible things happen when William is angry."
Before jumping into the review, I'd like to add a quick content warning that Near the Bone has some explicit depictions of physical, sexual, and psychological abuse. I won't be getting into any explicit details in my review, but just a head's up!
I've loved all of Christina Henry's books up until last year's The Ghost Tree, which didn't quite hit the right note for me (although it was still a solid story!), so I was exceptionally pleased by how much I ended up enjoying this one! Near the Bone is a spine-tingling story that quite literally made it difficult for me to stop reading whenever I picked this book up. There's a very addictive quality to this story that makes it hard to look away from the action, even though a lot of the action is very difficult to take in and experience.
Mattie lives alone in the mountains with only her abusive and despicable husband, William, for company--only, they're not quite as alone as they may think. There appears to be a monster living on the mountain with them that they discover after Mattie finds a mutilated fox, as well as a few other indicators when Mattie and her husband begin exploring to try to find the monstrous creature. Not only is there horror in the fact that Martha is stuck living with her abusive husband, but there's also a more conventional horror in the fact that there is what appears to be an actual monster lurking in the mountains where Martha and her husband live, and these two horror elements working together served to make this book a truly horrifying book to read. I found it particular interesting in exploring what seemed more horrific--the abuse or the truly terrifying and violent monster, and I think this opens up a door for some great conversations around abuse in general that are important.
I really appreciated and enjoyed how Henry chose to portray Mattie's personality and the various thoughts and 'versions' of herself that fought in her hand. Without giving anything away, I loved seeing Mattie slowly begin to fight with her thoughts that have been influenced and molded by her abusive husband more and more and began to develop her own thoughts and deductions about things that her husband may have 'trained' her not to think or worry about.  Her fortitude was something that I didn't expect to be quite so meaningful to me, and I think Mattie will be a character that a lot of people will connect with on a variety of levels.
I'm not going to mention any plot points or characters other than Mattie and her husband so as not to give anything specific away, even though it's difficult not to mention some aspects related to these that I really enjoyed. The publisher also requested that reviewers not put up reviews until at least the day of the book's release (today!), so I want to respect what seems to be a desire to not have any spoilers. Suffice to say, Henry expands this story in a number of major and minor ways that adds a lot of depth and discussion to this book, and I think this is what really strengthens the themes and experience of the reading experience.
The atmosphere and prose of Near the Bone is easily one of the best parts about it outside of characters, and this was not a surprise at all to me from Christina Henry. The way she is able to craft scenes ranging from fast and intense to get your heart racing to scenes that are slower and filled to the brim with foreboding is so deft and well-executed. I felt deeply unsettled and personally nervous for Mattie and some of the other characters in ways that felt as though I was in danger myself. It was definitely with baited breath that I turned (or tapped) the pages on more than a few occasions.
The only sort of "negative" that I have--and really, I don't think of it as too much of a negative in this case--is that I found some of the twists slightly predictable and a few of the plot points weren't quite as surprising as they could have been. That being said, it wasn't as if I could predict everything in the book, and I had a lot of fun slowly uncovering some of the secrets that lurked within this story. The ending was also extremely abrupt, and although I don't mind when endings feel somewhat open, I still have quite a few unanswered questions that continue to bother me at times. I'm not upset about the ending by any means, but I just feel ever so slightly unsatisfied. Still, I personally wouldn't let these minor critiques turn you away from this story!
Overall, I've given Near the Bone four stars! If you enjoy your horror mixed with some more serious elements and plenty of twists and turns, then definitely give this one a shot.
*I received a copy of Near the Bone courtesy of NetGalley and the publisher in exchange for an honest review.*

Email ThisBlogThis!Share to TwitterShare to FacebookShare to Pinterest
Labels: christina henry, near the bone, review