Review: The Light of the Midnight Stars by Rena Rossner 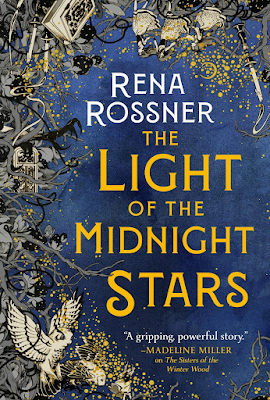 The Light of the Midnight Stars by Rena Rossner
Redhook
Publication Date: April 13th, 2021
Hardcover. 432 pages.
About The Light of the Midnight Stars:
"An evocative combination of fantasy, history, and Jewish folklore, The Light of the Midnight Stars is fairytale-inspired novel from the author of The Sisters of the Winter Wood.
Deep in the Hungarian woods, the sacred magic of King Solomon lives on in his descendants. Gathering under the midnight stars, they pray, sing and perform small miracles - and none are more gifted than the great Rabbi Isaac and his three daughters. Each one is blessed with a unique talent - whether it be coaxing plants to grow, or predicting the future by reading the path of the stars.
When a fateful decision to help an outsider ends in an accusation of witchcraft, fire blazes through their village. Rabbi Isaac and his family are forced to flee, to abandon their magic and settle into a new way of life. But a dark fog is making its way across Europe and will, in the end, reach even those who thought they could run from it. Each of the sisters will have to make a choice - and change the future of their family forever."

The Light of the Midnight Stars is a beautiful and  meaningful story that I didn't expect to love as much as I did. It's a difficult story that is full of loss, displacement, sorrow, but it's also filled with hope, family, beauty, magic, and love.

This story follows the three sisters Hannah, Sarah, and Levana and we get perspectives from all three of them. Hannah is the eldest and has a closeness with nature that comes out in a magic that helps things grow; Sarah is the middle daughter and is probably the most outspoken of all the daughters; Levana is of course the youngest and is the most devout of the three who also finds herself most captivated by the stars up above, which plays strongly into her own story later on. I really enjoyed all three of these POVs and found each story equally compelling--and equally devastating at times. This story hurt my heart a lot because everything these three sisters went through was so difficult and heartbreaking, but their courage throughout was also really inspiring and hopeful.

The entire family is forced to flee their home at one point, and this is also when a large plot point occurs involving displacement and major identity struggles. I can't really say more about that because of spoilers, but I found this entire plot development a really interesting choice that sort of took me a little while to fully understand (no joke, I definitely felt entirely confused for a couple minutes after a certain plot shift and had no idea what was happening). This might be completely obvious to most people, but I was pretty jarred by the shift--but it wasn't a bad jarring, if that makes any sense. I really enjoyed how Rossner chose to play with the story and its narrative to fully convey just how impacting and poignant their need to flee because of who they were was.

Rossner has a very poetic prose and is able to convey plot points and character developments through even just the style of her prose, which is hard to describe without simply showing it in the books. Her writing is very flowing and there's a weird level of detachment at times that I think could throw some people off, but that I found worked really well with the flow of the story and the narrative itself.

The thing that most stood out to me about this book was the timeless feel it had. You know how when you read old classics or books of folktales and they just that special ability to fit into any time period? They don't feel exceptionally old, but they are full of wisdom and mature writing; but they also don't feel exceptionally modern? That's how this book felt to me, and I mean that as the highest compliment (in case my poor attempts to convey my meaning don't make sense). This messages are so important and fitting for all  times, and the characters also felt as though anyone could connect with them for at least one reason.

Rossner's books always feel as though they have so much heart and that they really come from a personal place. Her bio states that "her grandparents and great grandparents immigrated to the USA from Hungary, Romania, Russia, Ukraine, and Moldova - their stories, together with her love of Jewish mythology and fantasy, inspire her work," and I feel as though that really comes through in her work. This is more than Rossner just telling a story, this is her sharing something personal and meaningful with her readers, and I really appreciate that.

Overall, it was an easy five stars from me for The Light of the Midnight Stars! I was captivated by this enchanting story and highly recommend it. If you read The Sisters of the Winter Wood and are now hesitant to try this one, I'd encourage you to give this one a shot still--I think you might enjoy it more!

*I received a copy of The Light of the Midnight Stars courtesy of the publisher in exchange for an honest review.*