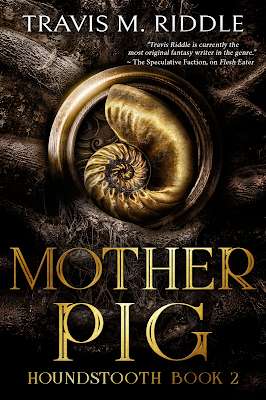 Mother Pig (Houndstooth #2) by Travis M. Riddle
Independently Published
Publication Date: June 1st, 2021
Paperback/Kindle. 502 pages.
About Mother Pig:
"The Houndstooth has forever loomed over Ruska. A towering black tree with indestructible bark, it seals away powerful dark magic. But its bark is cracking and this magic is leaking, threatening to extinguish all life in the valley.
Six individuals are infected with this foul magic, imbued with unnatural abilities called Blights. Coal is their final recruit, tasked by the immortal Dirt King to track down ancient artifacts that can seal the Houndstooth and restore balance to Ruska. As the Blighted venture through the kingdom, they realize its condition is worse than they feared. The must tangle with cults, navigate through melting forests, and fight hordes of grotesque beasts warped by the Houndstooth’s magic.
Ruska’s fate rests on their shoulders, but are they already too late to save it?"

I am probably starting to sound like a broken record at this point when I talk about Travis Riddle's books, but hopefully it's a good record with some catchy tunes because I don't think I'm going to be stopping anytime soon... because once again: I loved this latest release!

Mother Pig, the sequel to Riddle's 2020 release Flesh Eater (find my review here!), was one of my biggest anticipated 2021 releases and I am happy to report that it did not disappoint in the slightest. This series has somehow expanded the world-building so much more and in the best ways possible, added even more amazing characters, and has slowly started to shift the plot into something even bigger and more exciting than I could have expected or hoped for.

Okay, so where do I start? Since Coal was the start of the first book and most of the sequel, let's jump into some character discussion. Coal is a fantastic protagonist for a number of reasons, starting with the fact that he has a really relatable outlook on life and a sort of casual determination (if that makes any sense?) that I find exceptionally endearing. He's not passive by any means and is always somehow ready to jump in when needed, but he's also not someone who throws himself into high-power positions or tries to do too much without thinking about consequences; he's both relaxed and anxious at the same time. He also has also a wonderfully dry humor that makes his narrative voice engaging, and I find that his development as a character moves at a very steady and logical pace. He's come a long way from where he started in Flesh Eater, but he's still the same person at his core, just with new experiences and new perspectives on life.

Now, if you thought Flesh Eater had a great cast of characters, then get excited because Mother Pig introduces many more new and amazing characters. Although we still follow a main POV from Coal,  in this book we also gain a second POV from an endearing bat named Yurzu who is honestly the most adorable thing and I promise you're going to love him. Yurzu is someone who I felt a connection to almost immediately. He is a bit on the quieter side, a little shy (though I would almost say moreso just reserved) which makes him less likely to jump into the fray. At first, you might wonder why an author would choose to develop a third POV from a less active or extroverted character, but it works incredibly well due to Yurzu's thoughtfulness and careful observation of the the people and world around him. He's a little bit of an anxiety-filled bat, much as I often am (minus the bat part, usually), and I loved watching his confidence slowly build in different ways throughout the story.

Mother Pig has a cast of characters that form a bit of a ragtag group that you just can't hep but love. There are some major personality clashes among them, however, with some major moral and value conflicts between some select characters which I think added some validity and made it feel like how a real group of strangers thrown together to embark on a journey together might interact. In addition to Yurzu, Jatiri the saola was another new favorite character, and I really appreciated her friendship with Coal and pragmatic, friendly personality. (Also, as a side note, I looked up saolas because I had no idea what sort of animal that was and they are some truly adorable animals that are unfortunately critically endangered. So thank you to Riddle for introducing me to them!) There isn't really any Ilio in this book, which I know sounds devastating, but I promise this book has enough great characters to make up fro it, and I just know Riddle will have some great content for the third book.

One of the reasons I have enjoyed this trilogy so much thus far (outside of the characters and world-building) is due to the plot itself. It's not everyday that a book excels in creating not only strong characters and world-building, but also contains a plot that I honestly have no complaints about. The setup is very quest-like with a very specific sort of plot direction that almost feels like a game where you have to collect specific objects before you can advance, which I've really loved. However, the plot isn't that simple, either, because there are a ton of additional plot intrigues and elements (both minor and major) that moves it away from feeling too 'cookie cutter' or predictable. It's a lot of fun and has so many unpredictable elements and exciting twists that keep things lively and entertaining.

As I've mentioned, the world-building is expanded so much in this book and I love how much everything was opened up. If you're into gaming, the exploration of the world has reminded me a little of The Legend of Zelda: Breath of the Wild where you slowly unlock more and more areas of the world and find new types of people, cultures, and landscapes in each place (and that's a very positive comparison because I love that aspect of Breath of the Wild!). There was so much awe in discovering and realizing along with Coal and Yurzu how much more of this world there really is and how many more new and unexpected things were going on all around them.

Riddle's prose remains entirely engrossing and I continue to appreciate easy it is to follow, but is still sophisticated in a way where I can tell that he is an accomplished writer and knows how to craft each sentence in the best way possible. His dialogue always feels authentic and natural, which is always important to me, especially when a book focuses on relationship dynamics between characters. In addition, one of my favorite things about Riddle's writing has always been his focus on the details, including food, character backgrounds, world-building details, and more. These are not done in excess and fit so well with the writing style and in adding vibrancy to the world. I particularly love his focus on food details because I've found the cuisine types in this book so interesting to read about! I've enjoyed exploring the various cuisines that are popular in different areas, as well as the meat-free and insect-based dishes that exist, I just find it so creative and compelling for some reason. Maybe I'm just always hungry so I like to read about food, even if it doesn't sound good to me, but regardless, I really enjoy it.

I also have to quickly mention how much I enjoy the fact that this series is such a mixture of elements in addition to fantasy. I'm sure my review makes it seem mainly lighthearted and fun adventure, but trust me when I say that there are some pretty dark and intense aspects that firmly ground this book back into a reality of realizing that there truly are some horrors in this world that we can't predict or expect. At the same time, it reminds us that even some of the most terrifying things can be overcome with some teamwork and a commitment to making things better. And that even though there are some bad things we've done in the past, it's still possible to move forward and forge a new path.

If you're looking for a story that is brimming with adventure, heart, and endearing, colorful characters, then you really neat to pick up the Houndstooth trilogy. The sequel is ridiculously strong and makes for what is promising to be a truly fantastic trilogy.  Overall, it's obviously five stars from me for Mother Pig! I cannot wait for the finale, though I think I'll also be pretty sad when it's done!

*I received a copy of Mother Pig courtesy of the author in exchange for an honest review.*

Buy the book: Amazon
Posted by Jordan @ForeverLostinLiterature at 2:00 AM