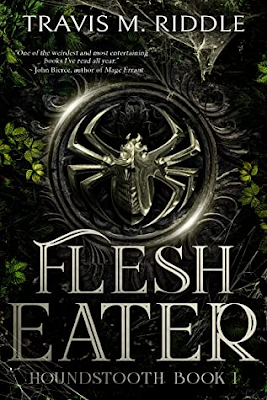 
"Branded as a Flesh Eater, Coal is on the run from Palace Stingers: soldiers tasked with tracking down those who have consumed flesh and locking them away in specialized prisons.
After a year of avoiding capture and struggling to scrape by working odd jobs for a local crime lord, Coal is growing desperate. He learns of someone in the city's underbelly who can erase his record, but her services don't come cheap.
Seeing no other option, he enters a spiderback race with a grand prize valuable enough to pay for his fresh start. But he's not the only one after the prize, and Coal is about to find out exactly how far he's willing to go to win."

Travis Riddle is one of those special authors that seems to be able to write a pretty wide variety of styles of stories and somehow manages to make each one become something truly exceptional that I (and it seems, many others readers as well) am able to connect with effortlessly. Flesh Eater is Riddle's first endeavor into a fantasy series and it is easy to say that it's off to a brilliant start.

Flesh Eater is a story of a fox named Coal who has been on the run for years as a result of breaking a crime that is particularly offensive to the land in which he lives, which has labeled him as a Flesh Eater. Coal has spent years attempting to stay out of sight of authorities, and in Flesh Eater he finally stumbles upon a chance to fully free himself from this (attachment), but in order to do so he has to undertake some fairly arduous events to get him there.

Before getting to anything else, I first want to say how much I love the world-building in Flesh Eater. Everything about this world is full of ideas, excitement, and imaginative elements that just feel so comforting and exciting to me at the same time. One of Riddle's strong world-building elements is that this is a world with animal characters, such as our protagonist the fox, in addition to rabbits, beavers, birds, as well as racing spiders--as in, spiders that essentially take the place of how we ride horses, and Riddle pulled off these animal characters perfectly. It was always obvious that the characters weren't human because of his descriptions and ways of describing certain actions, but it also felt extremely natural. I would occasionally get that movie Zootopia popping up into my head and picturing those types of animals mixed with Redwall-style, though of course there were plenty of differences that set these apart.

In addition to the characters, Riddle has also crafted an expansive world with a wide and varied set of lands and cultures that we get to see and hear occasional glimpses of in this book, but that also leaves so much more to explore in future books. One of my favorite things about fantasy series is getting to see the world expand in subsequent books, so I have high hopes that that will happens in the sequel. I also loved all the small components that combine to craft a well-developed world, such as discussion of hobbies of different characters, origins, the different crime lords--all of these worked together to craft an overflowing world.  And one last world-building component that always stands out to me is when an author develops the food, and Riddle certainly does that. A lot of this food is bug-based because eating meat isn't really a thing anymore, but Riddle's truly exquisite descriptions of those food items still sounded incredible. In fact, there are a lot of scenes where different types of food are described in a pretty extensive amount of detail, and I really enjoyed those scenes because it helped to add this small layer of detail that really cemented the world-building.

Moving on to characters brings us to our main protagonist, Coal--and I sort of loved him. The only character I might've loved more is Ilio, but we'll get to him in a second. Coal is a guy that's sort of been bombarded with some excessive bad luck and is really just doing whatever he can to keep surviving and get out of his troubles. I admired his determination and the way that he never really actively considered giving up--he keeps trying, because even though his attitude isn't always the most positive, his actions show that he's willing to keep trying and trying no matter the obstacle that gets in his way.

Now, moving onto Ilio--look, he's brilliant. I love his quiet presence that hides a witty, unpredictable person beneath his well-mannered exterior. I've never been one that's overly into romance and am pretty ambivalent to whether or not a story has a romantic pairing, but in this case I actively yearned for more from our love interest plot because it was just the cutest damn thing I've read in ages. Riddle really knows how to write chemistry between his characters--which, granted, is something that he has already proven in his previous books with his strong relationships and friendships, but in this book we get to see something really bud from nothing and the it just felt so natural and authentic.

I won't get into too many of the rest of the supporting cast of characters, although I will say that they are an extraordinarily colorful bunch and I sort of loved them all, even the ones that weren't the most pleasant ot interact with. As with his relationships among characters (both platonic and otherwise), Riddle also has a knack for creating characters with personalities that just feel as though they are bursting out of the constraints of the metaphorical walls of the book they are set within. It's nearly impossible for me to mix up characters because they are all so wonderfully developed and crafted with care that shows me that Riddle pays attention to and cares about all the details.

The last thing I'd like to touch on is Riddle's prose. I always have a hard time adequately describing my thoughts around it, but I'm going to do my best. There's something very comforting about his writing. It's not that this is some cozy happy-go-lucky, because it's really not, but there's this calmness and interest in taking his time in his narrative that makes it feel like something you can easily just slow down with, sink into, and relax from your day. It almost reminds me of how I feel about Murakami's work--that quiet, focused narrative style that doesn't apologize for taking the time to truly lay out a scene, describe some food, or spend time developing characters. It's something that I really love and that made this such an exceptionally fun, relaxing read during what has been such a stressful time for me.

Overall, it's obviously yet another five stars from me for Riddle. This book is fresh, exciting, heartwarming, thrilling, unpredictable, and all-around an outstanding fantasy read. The world-building is expansive and creative and I am definitely dying to see where that spin of an ending is gong to take us next and what more we get to explore from this world in the future. I can't wait for the sequel!

And if you're curious about Riddle's other books, be sure to check out my reviews for Balam, Spring, The Narrows, and Spit and Song!

*I received a copy of Flesh Eater in exchange for an honest review. This has no effect on my rating of the novel.*

Buy: Amazon
Posted by Jordan @ForeverLostinLiterature at 7:41 AM