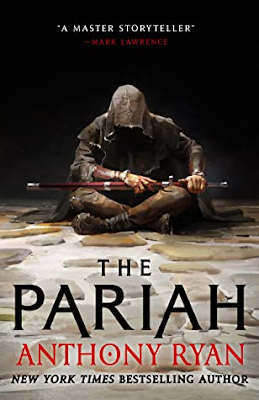 The Pariah by Anthony Ryan
Publication: August 24th, 2021
Orbit
Paperback. 608 pages.
Pre-order: Amazon | IndieBound
From Goodreads:
"Born into the troubled kingdom of Albermaine, Alwyn Scribe is raised as an outlaw. Quick of wit and deft with a blade, Alwyn is content with the freedom of the woods and the comradeship of his fellow thieves. But an act of betrayal sets him on a new path - one of blood and vengeance, which eventually leads him to a soldier's life in the king's army.
Fighting under the command of Lady Evadine Courlain, a noblewoman beset by visions of a demonic apocalypse, Alwyn must survive war and the deadly intrigues of the nobility if he hopes to claim his vengeance. But as dark forces, both human and arcane, gather to oppose Evadine's rise, Alwyn faces a choice: can he be a warrior, or will he always be an outlaw?"
I've technically already finished an ARC of this one, but I really enjoyed it and am so excited to see the final copy! I also like how this cover has some classic fantasy elements, but it's put together in a more unique manner. 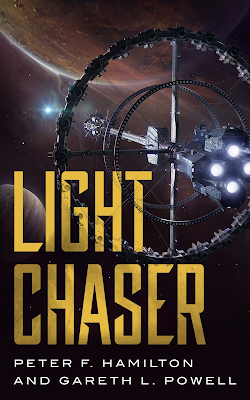 Light Chaser by Peter F. Hamilton, Gareth L. Powell
Publication: August 24th, 2021
Tordotcom
Paperback. 176 pages.
Pre-order: Amazon | IndieBound
From Goodreads:
"In Peter F. Hamilton and Gareth L. Powell's action-packed sci-fi adventure Light Chaser, a love powerful enough to transcend death can bring down an entire empire.
Amahle is a Light Chaser - one of a number of explorers, who travel the universe alone (except for their onboard AI), trading trinkets for life stories.
But when she listens to the stories sent down through the ages she hears the same voice talking directly to her from different times and on different worlds. She comes to understand that something terrible is happening, and only she is in a position to do anything about it.
And it will cost everything to put it right."
I've never read anything from Peter F. Hamilton before, but I'm always down for a new space book. I love the concept of trading for life stories, so I'm especially curious to see how this concept works everything together.