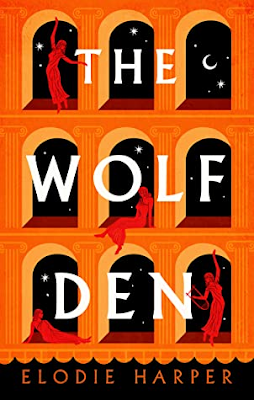 The Wolf Den by Elodie Harper
Head of Zeus
Publication Date: May 13th, 2021
Hardcover. 464 pages.
About The Wolf Den:
"Sold by her mother. Enslaved in Pompeii's brothel. Determined to survive. Her name is Amara. Welcome to the Wolf Den...
Amara was once a beloved daughter, until her father's death plunged her family into penury. Now she is a slave in Pompeii's infamous brothel, owned by a man she despises. Sharp, clever and resourceful, Amara is forced to hide her talents. For as a she-wolf, her only value lies in the desire she can stir in others.
But Amara's spirit is far from broken.
By day, she walks the streets with her fellow she-wolves, finding comfort in the laughter and dreams they share. For the streets of Pompeii are alive with opportunity. Out here, even the lowest slave can secure a reversal in fortune. Amara has learnt that everything in this city has its price. But how much is her freedom going to cost her?
Set in Pompeii's lupanar, The Wolf Den reimagines the lives of women who have long been overlooked."

The Wolf Den was such a pleasant surprise and has quickly become one of my favorite reads this year so far. This is a historical fiction set in the ancient Roman city of Pompeii in the year 74 CE featuring Amara, a slave working as a prostitute in Pompeii's Lupanar, or brothel. I spent a lot of time studying ancient Rome in my time as an undergrad and grad student, especially topics such as prostitution and slavery, so The Wolf Den's setting and premise was something that I was both excited for and a little nervous to see its execution. I was incredibly impressed and pleased by what I found, and it is so evident that Harper performed an abundant amount of research in order to capture this setting in the most authentic way possible. Also, just as a word of caution, this book handles topics such as sexual assault, slavery, general abuse (physical and mental), and suicide.

The main character we follow in The Wolf Den is Amara, a woman who began life as a doctor's daughter in the town of Aphidnai in ancient Attica before tragedy struck and she was eventually sold into slavery and eventually forced to work in Pompeii's notable brothel. Amara, like nearly every other character we meet who has been sold into slavery, is forced to accept life as a slave in order to survive and have the faintest hope of achieving freedom one day, as unlikely as it may be. Amara is an incredible protagonist and a character that I really grew to admire over the course of the novel. This is a woman who has had everything taken from her, and even though much of her happiness has been taken as well, she held onto the smallest bit of hope and spirit that she could in order to keep herself motivated to keep going. Amara is one of those characters whose decisions I respected and who actually seemed to have a reasonable head on her shoulders. She was caring and warm to the other women and slaves around her, but also calculating and intelligent enough to make sure that she–and the other women–were kept as much out of harm's way as possible (which was near impossible, at times). Amara was constantly looking for ways to improve her station, as well as the station of those closest to her, and I really loveed how genuine she felt in her sentiments towards others.

In addition to Amara was a small cast of other women slaves at the brothel, as well as their pimp, Felix, and a smattering of other slaves, freedmen, and citizens that we meet along the course of the novel. I enjoyed getting to meet all of these other characters, both intriguing and repulsive alike, and I appreciate that the more 'villainous' characters, such as Felix, were not made to be completely black and white, but rather had his own forms of nuance in his life. I particularly loved seeing the camaraderie of the women and the friendships that developed among themselves at the brothel. I also enjoyed seeing the sense of connection that each slave had with the other, whether they knew them or not, in that they all felt the same loss of freedom, but held onto the slimmest hope for achieving something even slightly better than their current situation, even if it would never mean true freedom (a truly horrible idea to consider in reality).

I appreciated how honest this book was about life as prostitute in ancient Rome and how it didn't shy away from any of the unfortunate realities of what these women (and men, in some cases) went through. This is a very graphic and difficult book in the sense that it tackles some very difficult topics and has some scenes that are hard to get through, but at the same time it wasn't overly graphic or vivid in describing some of the acts themselves, if that makes sense. There is nothing hidden, and the the discussions between characters are certainly graphic, but it's done so in a way that felt as though it was very clearly trying to mark what the experiences were like for the women and how little care or thought was given to them rather than spend time on scenes meant to titillate readers–everything was purposeful, nothing purely for entertainment or shock value, which was so refreshing.

Harper's handling of the depiction of slavery was incredibly nuanced and well done. Slaves were not really treated as actual individual human beings, but rather as sentient objects meant to perform tasks for their slaveowners. Despite the fact that some slaves may have different roles or were treated "better" than others, at the end of the day Harper really hammers home the message that they were still slaves, kept against their will and not treated as a free, important human being. Even freedmen/freedwomen were often still bound by a multitude of inherent bindings and things to hold them back. A lot of books try to show that some masters of slaves were kind to their slaves or something along the lines of, "well the masters were kind to the slaves and treated them as family, so was it really that bad?" I can't say how much I loved the fact that Harper never seemed to go down this line of thought. As just mentioned, there were certainly depictions of slaves who were treated "better" than other, but it was never meant to be done in a more sympathetic or understanding light that took away from the suffering or lack of rights held by any of the slaves.

This book is tragic, not just for the obvious reason of the slavery that is depicted, but in events that unfold and the ways in which friendships are affected throughout the story. You will grow attached to these characters and begin to see them as your friends and to root for them, so whenever something happens to them you will feel it deep in your heart as well. Although it's probably apparent that this book handles difficult topics by now, it does so in sincere, heartbreaking ways that were devastating to read and that still have me thinking about them.

Harper's prose was also something that really caught my attention for its beautiful simplicity. She doesn't waste time on purple prose (not that purple prose is bad), but impart so much meaning, both beautiful and tragic, in the ways that Amara views the world around her and through her experiences as she does her best to survive the harsh world she is a part of. Also, this is a fairly large book, but it reads quickly. In fact, I was so captivated by this story and the characters that I read it in not only record time, but in such a focused way that I would actually genuinely lose track of time while reading–and that doesn't happen all that often for me anymore these days!

There were also so many incredible themes and discussions explored in this book, one of which being the grey area around making one's life better and how that impacts those around them. In essence, you could say that every single character in this book moved forward in life with the goal of improving their situation in life, whether that was in the hopes of being freed from slavery, finding love anywhere they could, gaining more money, or simply gaining more power in any form. In the course of many of the characters who were slaves, some accepted their positions and looked for happiness where they could, whereas others decided to do whatever it would take to change their position, if possible. Of course, the difficulties arise when some people begin to gain higher status and must, unfortunately, eventually leave people behind. Those who are close will still want what's best for someone who is finally achieving better things in life, but at what cost will that happen, and who will be hurt in the rise to the top?

Overall, I've given The Wolf Den five stars! The depiction of the way pimps worked, brothels, slavery, the buying and selling of women as entertainment props, etc. were all very true to the history I have studied, and I thought this story really brought everything to life in a vivid–if not devastating/heartbreaking–way. If you are a historical fiction fan or are simply looking for an incredibly compelling story with great characters, then I strongly urge you to pick up The Wolf Den.