Review: The Book of Accidents by Chuck Wendig 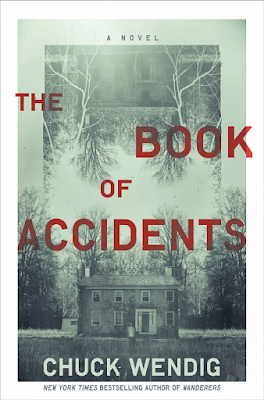 The Book of Accidents by Chuck Wendig
Del Rey Books
Publication Date: July 20th, 2021
Hardcover. 544 pages.
About The Book of Accidents:
"Long ago, Nathan lived in a house in the country with his abusive father—and has never told his family what happened there.
Long ago, Maddie was a little girl making dolls in her bedroom when she saw something she shouldn’t have—and is trying to remember that lost trauma by making haunting sculptures.
Long ago, something sinister, something hungry, walked in the tunnels and the mountains and the coal mines of their hometown in rural Pennsylvania.
Now, Nate and Maddie Graves are married, and they have moved back to their hometown with their son, Oliver.
And now what happened long ago is happening again . . . and it is happening to Oliver. He meets a strange boy who becomes his best friend, a boy with secrets of his own and a taste for dark magic.
This dark magic puts them at the heart of a battle of good versus evil and a fight for the soul of the family—and perhaps for all of the world. But the Graves family has a secret weapon in this battle: their love for one another."

The first book I read from Chuck Wendig was Wanderers a couple years back and I absolutely loved it, so I was excited to see another new work from Wendig, and especially one in the horror vein. I was happy to discover that many of the elements that I liked from Wanderers were also present in this book, such as his somewhat extensive exposition of characters and the setting, which I was excited to see and made me know that this was going to be a great read.

In The Book of Accidents, we follow a family consisting of mother and father Maddie and Nate and their son Oliver as they move back to live in Nate’s hometown at his recently passed father’s house. Nate never wanted to move back anywhere near his hometown or the memory of his father due to an exceptionally horrible childhood that is filled with bad memories. However, he knows that this move is likely the best move for his family for a variety of reasons, and both his wife and son are excited about the idea, so he obliges and they move back. But, as you might expect, once they move in they begin to notice some odd things happening around them, and each character individually begins to try to figure out exactly what’s going on. And although this seems like the perfect setup for a haunted house story, it’s not quite the haunted house story you might expect. The house itself has its moments, but it’s more of a central hub of sorts for everything else that happens in town around it than it is a main character, if that makes any sense. Oh yeah, and there’s a bit of a serial killer storyline/influence that plays what seems to be an insignificant role, yet also provides for some interesting framework.

The characters are something that I really appreciate about Wendig’s writing because of how much depth and description he supplies. Their personalities are drawn and developed in an incredibly in-depth manner, and I always feel like I really have a chance to understand how they think and how they feel, which also helps readers draw connections between different characters and elements. Nate and Maddie both have their own struggles while raising their son, but at the end of the day they seem to have a good understanding of one another and a deep love for their family, which really shows through in this book. Oliver in particular was a fascinating kid to follow because he is a bit of an extreme empath to the point where he can actually see anger and other emotions that people have. I’m a big empath myself and often struggle not absorbing other people’s emotions, but let’s just say my situation is much less, er, supernatural-esque than Oliver's; however, I do still really appreciate how Wendig portrayed Oliver in a relatable and intriguing manner, and it was really enjoyable to follow him as some pretty crazy things happened in this book.

All of the above are reasons why I think this book really can stand out from other horror and provide something just a bit different. For how many ‘traditional’ horror elements are present at the beginning of the story to set the stage, I was surprised by how unique and new this story ended up being (which, with Wendig I really shouldn’t be surprised, I guess!) It’s a pretty big book for horror at 500+ pages, and it’s not a book you necessarily want to rush through. Trust me, you’ll definitely read through this book quickly enough and have a hard time putting it down, but it’s a story meant to be savored more than rushed through. You get time to really get to know the characters and let the meat of the story really build up into something that can truly be appreciated.

As much as I enjoyed this story overall, I will admit that there were quite a few times where I wasn’t exactly sure what was going on, why certain things were happening, or what exactly certain characters’ roles where, but fortunately Wendig does a great job of slowly piecing different parts of the story together in some really neat ways that tended to have a great payoff at the end. There are also a few elements that I didn’t enjoy quite as much as I thought I might initially because they seemed a bit forced into the narrative, but overall they ended up working out well with the story (and I know that entire sentence is horribly vague, but I really can’t say anything without giving anything away). This is definitely a story that you appreciate more and more as you get nearer to the end and after you finish when you can reflect on everything that happened and finally understand how carefully Wendig crafted such a complex and intricate story.

The Book of Accidents is not necessarily an overtly scary or traditional horror novel by any means, but it’s horror comes from the eeriness of the setting and the writing and the small things that happen that are clearly building up to something bigger. Things gradually grow darker and more foreboding, and it’s clear that many of the strange things that happen or that some of the characters see have darker reasons or backgrounds that we, the readers, aren’t aware of just yet.

As a last note, this book handles some pretty heavy topics, especially those dealing with abuse and child abuse. There’s also some more violent moments and other difficult topics handled, so do keep all of those in mind when checking this book out.

Overall, I've given The Book of Accidents four stars!

*I received a copy of The Book of Accidents courtesy of NetGalley and the publisher in exchange for an honest review.*

Email ThisBlogThis!Share to TwitterShare to FacebookShare to Pinterest
Labels: chuck wendig, review, the book of accidents