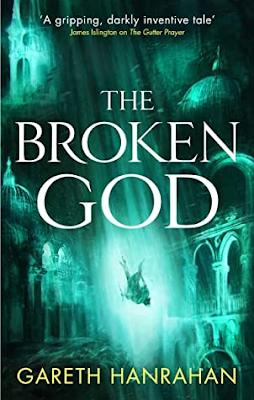 The Broken God (The Black Iron Legacy #3) by Gareth Hanrahan
Orbit
Publication Date: May 20th, 2021
Paperback. 578 pages.
About The Broken God:
"Enter a city of dragons and darkness.
The Godswar has come to Guerdon, dividing the city between three occupying powers. While the fragile Armistice holds back the gods, other forces seek to extend their influence. The criminal dragons of the Ghierdana ally with the surviving thieves - including Spar Idgeson, once heir to the Brotherhood of Thieves, now transformed into the living stone of the New City.
Meanwhile, far across the sea, Spar's friend Carillon Thay travels towards the legendary land of Khebesh, but she, too, becomes enmeshed in the schemes of the Ghierdana - and in her own past. Can she find what she wants when even the gods seek vengeance against her?"

I'm finally managing to catch up on some of this year's fantasy releases, and this latest installment in The Black Iron Legacy series has been one of the series I've been most excited to continue.

One of the best things about The Black Iron Legacy series, in my opinion, is how incredibly unique and distinctive it is. Each one of the books in this series so far has been pretty unpredictable for me. A lot of books tend to have either a plot where you can see a general sort of typical plot direction, with tropes, etc., or a plot that just feels entirely unpredictable where I genuinely am just along for the ride because I have no idea what's going to happen–and The Black Iron Legacy falls firmly in the latter. The Broken God has continued this trend and proved to be yet another incredible installment with some amazing world-building and characters, although I will admit that this has not been my favorite book in the series.

Each book so far in the series has had different main POV characters, with some familiar faces thrown in as well. In The Broken God, we had a return of Cari (the infamous Carillon Thay) as a main POV character, which we haven't seen since the first book and was easily a highlight for me, as well as newer characters Artolo, Baston, and Rasce. We also get to see Spar, Eladora, and handful of other recognizable (and new) characters to meet. And although this may be a slightly unpopular opinion, I really enjoyed getting to check in on Eladora and see what she's up to, as I find her an intriguing character.

Cari was, of course, a joy to read from again. I think my opinion matches pretty well with other readers when I say that Cari is a favorite character and I love getting chapters from her perspective. Her story is such an interesting one, and I also find her personality compelling as well. She's a bit of an erratic character with a rather large chaotic streak, but she also has a lot of determination and heart that I think is what makes so many of us readers like her character so much. The Broken God really gave us the opportunity to focus on Cari a bit more and learn more about her background and how she came to who and what she is today. And since we're talking about Cari, this feels like a good place to mention Spar as well, who I was really glad to see again in this book. I don't know exactly what it is about him, but Spar is also a character I love to see, and it was hard to see that him and Cari weren't together much in this book.

Artolo, Baston, and Rasce are the newer POVs we followed as more main protagonists, and I had some mixed feelings about all of them. Artolo was a great general antagonist figure for Cari, but I have to say that, overall, I didn't find him as compelling as I might have expected him to be. His singular drive and focus–to get Cari–was both admirable and annoying, at times in how it influenced his every action and personality. Baston and Rasce were hard for me to connect with as well.  Rasce is a favored dragon rider of the Ghierdana, and the entire Ghierdana focus in this book was really interesting to learn more about. He was placed in Guerdon with politics in mind, but his begins to form a connection that I didn't exactly expect, and I found this entire development really interesting.  Baston is one of those characters that I found myself admiring for his strong dedication to his moral values and personal feelings. I found myself a bit more interested in Baston's personality and individual motivations than Rasce's, though in contrast I found Rasce's general storyline and plot events more compelling than Baston's.

The Broken God is a novel that is undeniable action-packed and never really has a dull moment. Even the times of political discussions or any other religious or philosophical or involved discussion feels fast-paced and exciting. This lends itself to a nicely paced novel that, in general, makes for a pretty quick read. There were a few spots in the plot that I felt dragged a bit, such as when characters seemed to be forced into some action scene or other that didn't feel entirely necessary to the plot. This book felt like a middle-of-a-series novel in that there was considerable plot movement and some incredibly important things happened, but it also felt like it was sort of working quickly to progress and set up the plot for the future books, while also trying to simply fill in more world-building and background. I liked all of these elements, but I have to be honest that I didn't end up enjoying it as much as the previous two books. Still, I have no doubt I'll continue to enjoy this series and still had a great time with this book!

That ending was also entirely unpredictable, and I can't wait to see where Hanrahan decides to take this story next. I'll be anxiously awaiting the opportunity to find out! Overall, it's 3.75 stars from me for The Broken God!

*I received a copy of The Broken God courtesy of the publisher in exchange for an honest review.*