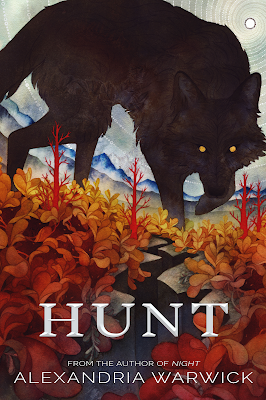 Hunt (North #3) by Alexandria Warwick
Wolf Publishing
Publication Date: August 12th, 2021
Paperback. 444 pages.
About Hunt:
"Deep within the frozen tundra, darkness is stirring. Nanuq, master of all polar bears, seeks a terrifying power that would grant him control over all who inhabit the North—both animal and man. Slowly, he builds his forces. Slowly, he moves his pawns.
Salvation lies with young Apaay. After being separated from her family, she finds herself deep in enemy territory, navigating a world of violence and cunning. But her quest for truth is only the beginning. The path laid before her will test her loyalties, beliefs, and even her own identity. For if Apaay is to live in a free world, she must embrace a destiny greater than anything she has ever known.
In this breathtaking third installment of the North series, Apaay discovers just how far she’ll go to protect those she loves, and to claim her place in a changing world."

Can we just take a second before diving into this review to appreciate this book's beautiful cover? All of the books in this series have been beautiful, but this one has definitely become my favorite.

Hunt is the third book in Alexandria Warwick's North series, and with its addition the series continues to just get better and better. The thing that has continually drawn me Warwick's novels is her writing, which is constantly imbued with meaning, depth, and a smooth, flowing prose style. The first book I read from her, The Demon Race, captured me because of the dark tones and poetic quality of the storytelling, and it is so apparent with each installment now in the North series that her writing is only getting more fine-tuned and intricate.

With Hunt, everything that was already intense just seemed to get more intense. This is probably going to be one of my more vague reviews simply because there's not too much I can say specifically in regards to character or plot without giving away too much about the previous books.

There are three main POV that we follow: Appay, Ila, and Kenai. Apaay and Ila continue to be two incredibly compelling characters to follow. They are both very distinct characters with personalities that have vast differences, but also similarities in their inner strength and determination. Apaay has grown in immense and momentous ways over these three books, and her growth has consistently made sense and felt perfectly timely. I really appreciate how much we get to go inside her head to really get a sense for what she struggles with and how she handles the many obstacles that show up in her path. The dynamic between Apaay and Numiak is so captivating and one that I can't seem to turn away from. It's complicated and messy, but it's also one of those character relationships that carries so much weight and intrigue that it's hard not to become invested in it. It's been a very slow build to watch the two become closer, but it has been entirely worth it.

Ila has faced some major revelations in recent plot events, so there is a lot for her to sort of continue unpacking and moving through in this book. She is forced into some difficult situations, but seems to really focus on her resourcefulness in this book to never give up or accept things that shouldn't be. Kenai is one of my favorite characters to read from (which might not mean much since I consider all POVs favorites of mine) because his character development and growth is fascinating to follow. His mind is always running and leads him to second guess many of the things he thought he knew or was previously okay with.

The world-building and setting of the North series continues to be one of my favorite things. I love cold climate settings, and the Inuit setting that it is inspired by is one that I have always enjoyed learning about. The Inuit mythology elements included in the North series are also fascinating and constantly inspire me to learn more about them. Warwick incorporates all of these elements into her world-building in a respectful and compelling manner, and everything works together to develop a truly fascinating world.

Warwick does an excellent job of pacing and plotting events in a logical manner, with plenty of faster- and slower-paced moments to lend a nice balance throughout and to hold my attention easily. Although this is not necessarily always the most fast-paced of novels, it never really drags or feels overwritten, but instead feels like it moves a great pace, with plenty of unexpected things happening just to make sure readers don't ever get too comfortable. The ending was a bit brutal and I continue to find myself shocked by the many twists and plot directions this book takes, but all in a good way that I love about this series and Warwick's writing.

Overall, it's five stars from me for Hunt! I can't wait to see what happens next in this series .

*I received a copy of Hunt courtesy of the author in exchange for an honest review.*