Can't-Wait Wednesday: Shards of Earth by Adrian Tchaikovsky & Velvet Was the Night by Silvia Moreno-Garcia 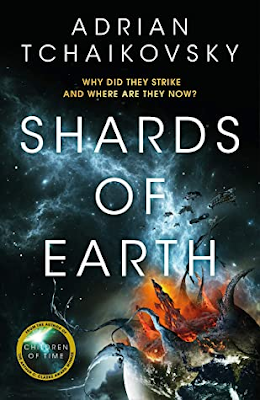 Shards of Earth by Adrian Tchaikovsky
Publication: August 3rd, 2021
Orbit
Hardcover. 560 pages.
Pre-order: Amazon | IndieBound
From Goodreads:
"The war is over. Its heroes forgotten. Until one chance discovery . . .
Idris has neither aged nor slept since they remade him in the war. And one of humanity's heroes now scrapes by on a freelance salvage vessel, to avoid the attention of greater powers.
After earth was destroyed, mankind created a fighting elite to save their species, enhanced humans such as Idris. In the silence of space they could communicate, mind-to-mind, with the enemy. Then their alien aggressors, the Architects, simply disappeared—and Idris and his kind became obsolete.
Now, fifty years later, Idris and his crew have discovered something strange abandoned in space. It's clearly the work of the Architects—but are they returning? And if so, why? Hunted by gangsters, cults and governments, Idris and his crew race across the galaxy hunting for answers. For they now possess something of incalculable value, that many would kill to obtain."
"Enhanced humans" is always an interesting notion to explore, and I'm always a bit of a sucker for sci-fi books that explore some sort of future in space, especially when something dramatic has happened. Can't wait to check this one out! 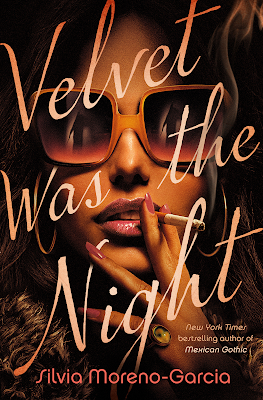 Velvet Was the Night by Silvia Moreno-Garcia
Publication: August 17th, 2021
Del Rey
Hardcover. 304 pages.
Pre-order: Amazon | IndieBound
From Goodreads:
"1970s, Mexico City. Maite is a secretary who lives for one thing: the latest issue of Secret Romance. While student protests and political unrest consume the city, Maite escapes into stories of passion and danger.
Her next-door neighbor, Leonora, a beautiful art student, seems to live a life of intrigue and romance that Maite envies. When Leonora disappears under suspicious circumstances, Maite finds herself searching for the missing woman—and journeying deeper into Leonora’s secret life of student radicals and dissidents.
Meanwhile, someone else is also looking for Leonora at the behest of his boss, a shadowy figure who commands goon squads dedicated to squashing political activists. Elvis is an eccentric criminal who longs to escape his own life: He loathes violence and loves old movies and rock ’n’ roll. But as Elvis searches for the missing woman, he comes to observe Maite from a distance—and grows more and more obsessed with this woman who shares his love of music and the unspoken loneliness of his heart.
Now as Maite and Elvis come closer to discovering the truth behind Leonora’s disappearance, they can no longer escape the danger that threatens to consume their lives, with hitmen, government agents, and Russian spies all aiming to protect Leonora’s secrets—at gunpoint.
Velvet Was the Night is an edgy, simmering historical novel for lovers of smoky noirs and anti-heroes."
I have been really loving Silvia Moreno-Garcia's work lately, so this one obviously caught my immediate attention!
What do you think about these upcoming releases? What are your anticipated upcoming releases?
Posted by Jordan @ForeverLostinLiterature at 2:00 AM