Can't-Wait Wednesday: The Bone Ship's Wake (The Tide Child #3) by RJ Barker, A Song of Flight (Warrior Bards #3) by Juliet Marillier, & A Clash of Steel by C.B. Lee The Bone Ship's Wake (The Tide Child #3) by R.J. Barker
Publication: September 28th, 2021
Orbit
Paperback. 592 pages.
Pre-order: Amazon | IndieBound
From Goodreads:
"Discover a brilliantly imagined epic fantasy of honor, glory, and warfare in this action-packed conclusion to the David Gemmell Award-nominated trilogy.
Joron Twiner's dreams of freedom lay shattered. His Shipwife is gone and all he has left is revenge. Leading the black fleet from the deck of Tide Child, he takes every opportunity to hurt the Hundred Isles he is given. But his time is limited.
His fleet is shrinking, the Keyshan's Rot is running through his body, and he hiding from a prophecy that says he and the avian sorcerer, the Windseer will end the entire world.
But the Sea Dragons have returned, a miracle in itself, and who is to say that if you can have one miracle, there cannot be another?"
So I still need to catch up on the second book in this trilogy, but I'm still excited about the final book's release! Barker is such a creative and talented writer, I can't wait to see how he wraps everything up. 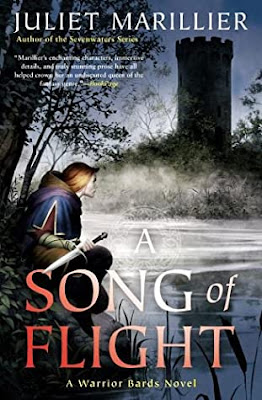 A Song of Flight (Warrior Bards #3) by Juliet Marillier
Publication: September 21st, 2021
Ace Books
Paperback. 464 pages.
Pre-order: Amazon | IndieBound
From Goodreads:
"A young warrior who wields both the power of her music and the strength of her sword faces a grave threat in this enthralling historical fantasy.
Bard and fighter Liobhan is always ready for a challenge. So when news arrives at Swan Island that the prince of Dalriada has gone missing after an assault by both masked men and the sinister Crow Folk, she's eager to act.
While Liobhan and her fellow Swan Island warriors seek answers to the prince's disappearance, the bard Brocc, Liobhan's brother, finds himself in dire trouble. His attempts to communicate with the Crow Folk have led him down a perilous path. When Liobhan and her comrades are sent to the rescue, it becomes clear the two missions are connected--and a great mystery unfolds.
What brought the Crow Folk to Erin? And who seeks to use them in an unscrupulous bid for power? As Liobhan and Brocc investigate, it will take all their strength and will to continue pursuing the truth. With the safety of their loved ones in the balance, the risks they must take may cost them everything."
I figured I might as well keep the trilogy conclusion theme going with A Song of Flight! I have been loving this trilogy from Juliet Marillier and I feel like it's been a bit underrated, unfortunately. Still, I am thrilled to see how it ends, though I'll be sad to leave this story behind.
and... 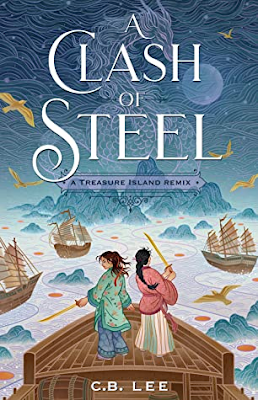 A Clash of Steel by C.B. Lee
Publication: September 7th, 2021
Feiwel and Friends
Hardcover. 432 pages.
Pre-order: Amazon | IndieBound
From Goodreads:
"1826. The sun is setting on the golden age of piracy, and the legendary Dragon Fleet, the scourge of the South China Sea, is no more. Xiang has grown up with stories about the Dragon Fleet and its ruthless leader, a woman known only as the Dragon Queen, all her life. Xiang desperately wants to set sail and explore—mainly to find her father, a presumed dead crew member of the Dragon Fleet. Her only memento of him is a pendant she always wears, a simple but plain piece of gold jewelry.
But the pendant's true nature is revealed when a mysterious girl named Anh steals it, only to return it to Xiang in exchange for her help in decoding the tiny map scroll hidden inside. Rumor has it that the legendary Dragon Queen had one last treasure—the plunder of a thousand ports—hidden away on an island shrouded in mist that only can be seen once in a blue moon.
Xiang is convinced this map could lead to the fabled treasure. Captivated with the thrill of adventure, she joins Anh and her motley crew off in pursuit of the island. But the girls soon find that the sea—and especially those who sail it—are far more dangerous than the legends led them to believe."
I love the sound of this adventure! This is described as a Treasure Island remix, which I think sounds like such an awesome premise with a really neat new setting.
What do you think about these upcoming releases? What are your anticipated upcoming releases?
Posted by Jordan @ForeverLostinLiterature at 2:00 AM