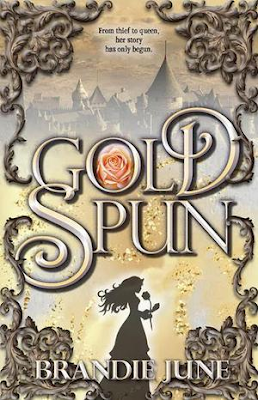 Gold Spun by Brandie June
CamCat Books
Publication Date: June 8th 2021
Paperback. 368 pages.
About Gold Spun:
"If Nor can’t spin gold, she can always spin lies.
When seventeen-year-old Nor rescues a captured faerie in the woods, he gifts her with a magical golden thread she can use to summon him for a favor. Instead, Nor uses it for a con—to convince villagers to buy straw that can be transformed into gold. Her trick works a little too well, attracting the suspicion of Prince Casper, who hates nobody more than a liar. Intent on punishing Nor, he demands that she spin a room of straw into gold and as her reward, he will marry her. Should she refuse or fail, the consequences will be dire."

Gold Spun is an engaging, fast-paced, and enchanting retelling of the classic Rumpelstiltskin story. I wasn't entirely sure what to expect from this book other than the fact that it's a fantasy retelling, but I really enjoyed the story that emerged and am so appreciative that I received the opportunity to be sent a copy of this book to read.

I'm always a big fan of any fairy tale retelling, and Rumpelstiltskin is always one that seems to grab me right away. I really appreciated and enjoyed how the author took the classic story and turned it into her own creation in a really inventive and exciting way. We have a struggling thief who's only to trying to help her and her brothers survive, a prince who is thrust into an unexpected power position, and the mysterious and elusive fay who are believed to be violent and dangerous foes. This was a really fun world to dive into, and I felt completely transported to the new setting and the fantasy political atmosphere of the kingdom.

Nor is an incredibly tough and resourceful protagonist who has a rather defiant streak running through, but it's important to note that her defiance is largely rooted in her determination to help take care of and provide for herself and her brothers as they con people for a living in order to get by. The majority of the book is narrated from Nor's POV, which really allowed me to get inside her head and try to understand many of her reasons and motivations for the decisions she makes (even if I didn't agree with all of them at times).

Nor's burgeoning relationships with Casper and Pel, prince and fay, respectively, were exciting to follow. Both had entirely different situations in meeting one another–although both were sudden, unexpected, and not entirely desired at the time–and I loved seeing how Nor connected with them both in different ways. I found Casper a charming character who seemed to place an adequate value on his role as a leader, which I really appreciated seeing. Pel was a slightly more interesting and complex character solely because he was more mysterious in general, and this definitely increased my intrigue in him quite a bit. I am hoping (and assuming) that the sequel will introduce a bit more into the world of the fay in June's world, and I am looking forward to that. There is a bit of romance in this book and a little bit of a love triangle, though the latter element was not overwhelming. I felt that the romance, although a somewhat important part of the plot, was not the main focus of the story and seemed to fit in nicely. It was a little predictable at times, but in a way that felt familiar and fun rather than frustrating or boring.

Gold Spun is not the most original book I've ever read, but I also don't think it's supposed to be. It feels like something I've read before, but in a good way where I got to see and experience some great elements of a retelling and an exciting new fantasy world with expressive characters and new plots and motivations. This was my 'before bed' book (I tend to read a different book at night than I do during the day because my mind is a bit too... impressionable to read certain things before sleeping, just for clarification), and it was honestly perfect for that. I loved just getting to dive into this fantasy world with Nor and Casper and Pel and read a very fairy tale-like story with great, strong characters before ending my day. This was a really fun YA fantasy that I think hits on a lot of tropes that people love and will enjoy reading in this new setting with some really charismatic characters.

*I received a copy of Gold Spun in exchange for an honest review.*
Buy the book: Amazon | IndieBound