Review: Seven Deaths of an Empire by G.R. Matthews 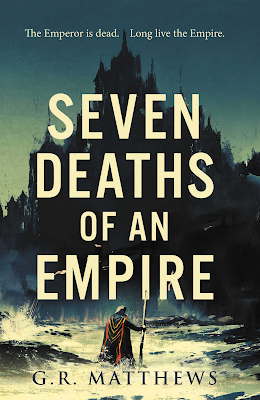 Seven Deaths of an Empire by G.R. Matthews
Solaris
Publication Date: June 22nd, 2021
Hardcover. 550 pages.
About Seven Deaths of an Empire:
"The Emperor is dead. Long live the Empire.
General Bordan has a lifetime of duty and sacrifice behind him in the service of the Empire. But with rebellion brewing in the countryside, and assassins, thieves and politicians vying for power in the city, it is all Bordan can do to protect the heir to the throne.
Apprentice Magician Kyron is assigned to the late Emperor’s honour guard escorting his body on the long road back to the capital. Mistrusted and feared by his own people, even a magician’s power may fail when enemies emerge from the forests, for whoever is in control of the Emperor’s body, controls the succession.
Seven lives and seven deaths to seal the fate of the Empire."

I'll admit it–Seven Deaths of an Empire first grabbed me because of it's stunning and dramatic cover. It did remind me quite a bit of Anna Smith Spark's The Tower of Living and Dying's cover (another book that I love), and that helped make me think this might be a book to check out. I also read the synopsis and thought it sounded right my alley–and it was!

Seven Deaths of an Empire is set in an ancient Roman-inspired fantasy world–something that I wasn't aware of until I started reading the book–and within this world we have the Empire, the Emperor, the "barbarians," and a struggle for power and control. The story kicks off when the current reigning emperor is killed in action and a battle for succession begins. Although there is a set line of succession for the emperor's death, the key point in this book is that whoever controls or holds possession of the emperor's body is the one with the ability to become emperor, thus getting the emperor's body back from battle to his family becomes of utmost importance, and this is where our story really kicks off. In the backdrop of this plot is a world in which the "forest tribes" are considered enemies of the empire and many have been 'conquered' by the empire, a dynamic that plays a large role in this book's discussions, particulary involving one of the characters specifically.

The story switches POV between two main protagonists: the older General Bordan who has spent his life dedicated to working for the Empire, and the young apprentice Kyron, working under Master Padarn where the two are assigned to help the honour guard escort the emperor's body back to the heart of the empire. What I really loved about this POV setup was that it was consistent at switching between each character equally, as well as the fact that they were all chapters on the shorter side, which really helped to keep the pace up. I found the individual storylines and places in which we first meet General Bordan and Kyron in their roles a great start for setting up the story for both the plot and their personal development. These were two very solid characters in the sense that they were easy to sort of get to know and understand their place in this world, and I appreciated the ease with which I, as a reader, eased into their respective roles in the plot and setting.

My main point of contention with the characters is the fact that they weren't the easiest to connect with and there were a few times throughout where I felt their dialogue or personality was not the most developed.  General Bordan was my favorite of the two protagonists and had a much more complex and interesting role in the book. His background and current stage of life as an aging, near-retirement general provided a unique dynamic and perspective that I feel isn't given as much opportunity to exist in fantasy as I would like, so I appreciated that in this book. There were a few times I found his development slightly inconsistent, but otherwise he was a great character to follow. Kyron, however,  was unfortunately much less engaging and I struggled to really care all that much about him. That's not to say that his role wasn't interesting at all, as I really enjoyed getting to see him use his magic and navigate his dynamics with those around him and learn more about the world around him. But he was almost frustratingly naive at times, and his development wasn't quite as smooth as it could have been, leading to a character who was perhaps potentially interesting, but never quite moved into territory where I found myself exceptionally engaged.

I also struggled with the fact that this plot felt slightly too predictable at times. I don't mind somewhat predictable plots where you have a general idea of where things might go, but I pretty much knew what was coming at almost every turn of this book. Now, the tricky part is that that isn't necessarily a bad thing, since if you're someone who hasn't read or watched a ton of fantasy or similar stories, you might not guess it every time, but if you're someone like me who drowns themselves in books and fantasy stories, it just felt a bit like moving through the motions at times. I also found myself extremely frustrated with some of the additional characters, most often the more 'villain'-like or difficult characters, who were almost too stereotypically annoying and frustrating. I would've liked to see a bit more character dimensionality at play, which might have helped things be slightly less predictable as well.

The last thing I'll mention is that although the world seemed interesting–and what I read about it was interesting–I felt as though we really didn't get too much of a look at the world as a whole. I found the ancient Rome-inspired setting compelling, but at the same time it made me slightly uncertain if this was meant to be more historical fiction with a twist or straight new fantasy world because of the many Roman world positions and similarities included. I also felt like we only tastes of what the other cultures were like and how the magic system truly worked, I am hoping and/or assuming that if future books are published in this world, we'll get to explore this world a bit more and get into a few more specifics, including both of the world and the magic system. I saw the author write that he has sequels written, but that this story is meant to be a complete story, so I'm unsure if there will be more, but I certainly hope so. The ending of this book definitely left me expecting a sequel, so here's to hoping there will be!

Overall, I've given Seven Deaths of an Empire 3.75 stars! I know it seems like I mentioned a lot of negatives, but for all that I was very much engaged throughout this book and found myself following along and enjoying the story a lot. This wasn't the best fantasy book I've ever read, but I still felt it was a perfectly solid fantasy that kept me engaged and definitely wanting more! I'm not sure if a sequel is planned to be published, but if so I will absolutely be checking it out.