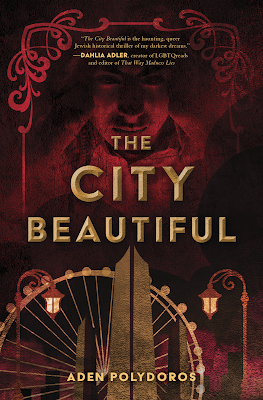 The City Beautiful by Aden Polydoros
Inkyard Press
Publication Date: October 5th, 2021
Hardcover. 480 pages.
About The City Beautiful:
"Death lurks around every corner in this unforgettable Jewish historical fantasy about a city, a boy, and the shadows of the past that bind them both together.
Chicago, 1893. For Alter Rosen, this is the land of opportunity, and he dreams of the day he’ll have enough money to bring his mother and sisters to America, freeing them from the oppression they face in his native Romania.
But when Alter’s best friend, Yakov, becomes the latest victim in a long line of murdered Jewish boys, his dream begins to slip away. While the rest of the city is busy celebrating the World’s Fair, Alter is now living a nightmare: possessed by Yakov’s dybbuk, he is plunged into a world of corruption and deceit, and thrown back into the arms of a dangerous boy from his past. A boy who means more to Alter than anyone knows.
Now, with only days to spare until the dybbuk takes over Alter’s body completely, the two boys must race to track down the killer—before the killer claims them next."

I have struggled a bit with YA fantasy over the past couple years it seems now, but something about The City Beautiful-the setting (I love historical fiction), the storyline, the characters-called out to me, and I'm happy to report that I really did enjoy this beautifully written and carefully crafted story.

The City Beautiful takes place in Chicago in 1893 during the run of the famous (or at this point from what we know of it from history, I'd say infamous) Chicago World's Fair. We follow young Alter Rosen who has immigrated to escape the oppression from his home country of Romania and is working as much as possible and saving all the money that he can in order to help his family come to America one day as well.

All I really wanted to do was protect Alter from the harsh reality of life and the tragedy that seemed to follow him. We enter the story as a growing line of Jewish boys are being murdered, and not soon after the story begins Alter's own friend and roommate, Yakov, becomes the next victim. This is where Alter's quest to find Yakov's–the other victims'-killer begins as a result of him becoming possessed by Yakov's dybbuk. I really enjoyed reading from Alter's perspective, and I found him to be such an interesting character who has an incredibly caring and determined heart, but who is also constantly worrying for his family and his own ability to do enough to care for them. I appreciate that he was never willing to give up because something was too difficult, and that his relationships with those around fluctuated and had a variety of conflicts that made them feel real and compelling. We also meet a character named Frankie who I absolutely adored, and who I think added so much color and excitement to this story in some great ways.

I loved how Polydoros combined the paranormal elements of Jewish culture with the historical setting of 1893 Chicago, and I felt that this setting really contributed to an eerie and compelling atmosphere. There are also some prominent LGBT elements of this story that I think added even more layers to the story in the all the best ways possible, and allowed the story to explore more avenues. My only criticism would probably be that there were a few times where the plot seemed to falter slightly, and there were a few points where I did find things got a bit slow and required more motivation to get through them to where the plot picked up again.

I really feel as though I learned even more about Jewish traditions and culture than I already knew, and I think Polydoros really did an excellent job of showcasing what life was like for Jews in this time, and the hatred and racism that was a part of daily existence. It is a hard read, at times, but a good one that I think really achieved the goal it set out to share. Of course, I cannot speak to all elements of the representation and specific cultural elements involved, but I would love to read some reviews from people who do have more experience and personal connections to this story.  Also, for those who are not as familiar with the culture, there is a wonderful glossary provided in the back of the book that explains many of the Jewish terms that I found immensely insightful.

Since I am not Jewish, as much as I appreciated and learned from this book, I am sure that there are Jewish kids out there that would benefit from this book far more than I, and for that reason I am going to be sure to donate my copy to my local Jewish community to make sure that someone else can find this story and hopefully get even more out of it than I did.

Overall, I've given The City Beautiful four stars! This was a deeply moving story of a boy trying to find his path and survive this brutal and often unforgiving world. It is a difficult read at times, but it is well worth the journey and contains many incredible themes and messages to come away with. Aden Polydoros is an author that I am going to keep my eye out for, and I would recommend you do the same!

*I received a copy of The City Beautiful courtesy of the publisher in exchange for an honest review.*