Can't-Wait Wednesday: The Fall of Babel (The Books of Babel #4) by Josiah Bancroft & Year of the Reaper by Makiia Lucier 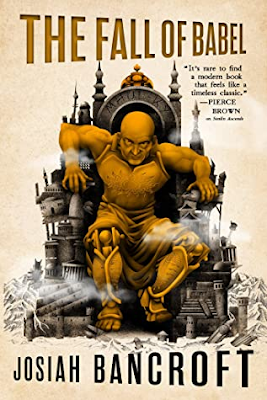 The Fall of Babel (The Books of Babel #4) by Josiah Bancroft
Publication: November 9th, 2021
Orbit
Paperback. 672 pages.
Pre-order: Amazon | IndieBound
From Goodreads:
"The incredible final book in the word of mouth phenomenon fantasy series that began with Senlin Ascends.
"The "Books of Babel" are something you hope to see perhaps once a decade — future classics, which may be remembered long after the series concludes." -- (Los Angeles Times)
As Marat's siege engine bores through the Tower, erupting inside ringdoms and leaving chaos in its wake, Senlin can do nothing but observe the mayhem from inside the belly of the beast. Caught in a charade, Senlin desperately tries to sabotage the rampaging Hod King, even as Marat's objective grows increasingly clear. The leader of the zealots is bound for the Sphinx's lair and the unimaginable power it contains.
In the city under glass at the Tower's summit, Adam discovers a utopia where everyone inexplicably knows the details of his past. As Adam unravels the mystery of his fame, he soon discovers the crowning ringdom conceals a much darker secret.
Aboard the State of Art, Edith and her crew adjust to the reality that Voleta has awoken from death changed. She seems to share more in common with the Red Hand now than her former self. While Edith wars for the soul of the young woman, a greater crisis looms: They will have to face Marat on unequal footing and with Senlin caught in the crossfire.
And when the Bridge of Babel is finally opened, and the Brick Layer's true ambition revealed, neither they nor the Tower will ever be the same again."
So, I've already read this book. Orbit was kind enough to send me an early ARC and I couldn't possibly wait until November to read it, and oh boy is it worth the wait! I can't wait to see it in its finished glory and to finally have the full completed series out in the world. The Books of Babel series is so good and unique and truly a one-of-a-kind experience, and if you haven't picked any of these books up yet... the series is going to be complete, so definitely do so! 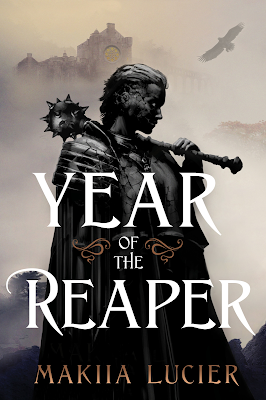 Year of the Reaper by Makiia Lucier
Publication: November 9th, 2021
Clarion Books
Hardcover. 336 pages.
Pre-order: Amazon | IndieBound
From Goodreads:
"The past never forgets . . .
Before an ambush by enemy soldiers, Lord Cassia was an engineer's apprentice on a mission entrusted by the king. But when plague sweeps over the land, leaving countless dead and devastating the kingdom, even Cas’ title cannot save him from a rotting prison cell and a merciless sickness.
Three years later, Cas wants only to return to his home in the mountains and forget past horrors. But home is not what he remembers. His castle has become a refuge for the royal court. And they have brought their enemies with them.
When an assassin targets those closest to the queen, Cas is drawn into a search for a killer…one that leads him to form an unexpected bond with a brilliant young historian named Lena. Cas and Lena soon realize that who is behind the attacks is far less important than why. They must look to the past, following the trail of a terrible secret—one that could threaten the kingdom’s newfound peace and plunge it back into war."
I've been really curious about Makiia Lucier's previous releases, but never got to them, and now she has another book that sounds interesting! I'm so taken in by that cover, which is weird since I don't typically care people on covers. I think this sounds like a pretty compelling premise, so I'd be curious to check it out!
What do you think about these upcoming releases? What are your anticipated upcoming releases?
Posted by Jordan @ForeverLostinLiterature at 2:00 AM

Email ThisBlogThis!Share to TwitterShare to FacebookShare to Pinterest
Labels: cww, josiah bancroft, makiia lucier, the books of babel, the fall of babel, year of the reaper