Review: The Death of Jane Lawrence by Caitlin Starling 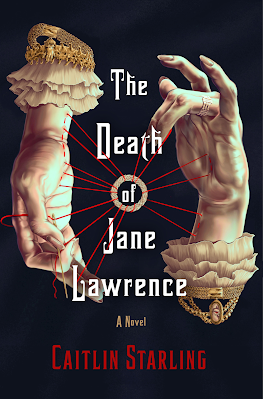 The Death of Jane Lawrence by Caitlin Starling
St. Martin's Press
Publication Date: October 5th, 2021
Hardcover. 368 pages.
About The Death of Jane Lawrence:
"Practical, unassuming Jane Shoringfield has done the calculations, and decided that the most secure path forward is this: a husband, in a marriage of convenience, who will allow her to remain independent and occupied with meaningful work. Her first choice, the dashing but reclusive doctor Augustine Lawrence, agrees to her proposal with only one condition: that she must never visit Lindridge Hall, his crumbling family manor outside of town. Yet on their wedding night, an accident strands her at his door in a pitch-black rainstorm, and she finds him changed. Gone is the bold, courageous surgeon, and in his place is a terrified, paranoid man—one who cannot tell reality from nightmare, and fears Jane is an apparition, come to haunt him.
By morning, Augustine is himself again, but Jane knows something is deeply wrong at Lindridge Hall, and with the man she has so hastily bound her safety to. Set in a dark-mirror version of post-war England, Starling crafts a new kind of gothic horror from the bones of the beloved canon. This Crimson Peak-inspired story assembles, then upends, every expectation set in place by Shirley Jackson and Rebecca, and will leave readers shaken, desperate to begin again as soon as they are finished."

The Death of Jane Lawrence made for a particularly interesting reading experience. I was so excited for this book, partially because I loved Caitlin Starling's previous book, The Luminous Dead, and partially because the synopsis itself just sounded so intriguing and gothic and perfect. This book had an amazing start that had me hooked from the very beginning, and it continued to build up and get me really excited about where the story was going to go... and then about halfway through things sort of got weird and then continued to flatline and eventually go downhill from there.

The story begins with a marriage arrangement between Jane and the young doctor Augustine. Jane instigates this arrangement as a benefit for both herself and Augustine for businesslike purposes, and it seems as though it will be just that. There are a few rules to their marriage, one of which is that Jane is never to visit the doctor's mansion at Lindridge Hall. We don't know exactly why this is the case, but since Jane agrees to it, it is left as is. However, as you may have guessed, things don't quite go as Augustine had hoped and Jane ends up stranded at Lindridge Hall one night after an extreme storm prevents her from going elsewhere. While there, she discovers that there are a few odd things about both her new husband and the house itself, and the mysteries only seem to grow from there.

I loved the premise of this book, and I think Starling really excels in her ability to develop an all-inclusive atmosphere and setting that really lets the reader feel as though they are in this somewhat gothic story. The setting itself is a slightly alternate reality to our own, but feels similar enough that it is easy to get acquainted with. I felt a constant sense of a sort of gloom that was overarching in the atmosphere, and I loved the feeling that this gave the story. This spooky overtone persisted throughout the entire book and was easily one of my favorite elements as it fit the dark, mysterious Lindridge Hall perfectly, which acted as one of our main settings. There are plenty of creepy elements at play in this book, as well as some hauntings and even some dark magic that made it a really fun and great read for the fall/Halloween season.

I really liked Jane's matter-of-fact approach to many aspects of her life, and I felt that it made for a really compelling foundation for this particular storyline. What I didn't care for was what I felt was a bit of inconsistency in her personality, and although I think it was meant to shift gradually throughout the story, it felt much more sudden and jarring than likely intended, which threw me off a bit. Nonetheless, I liked that Jane was practical and resourceful while also being very human and aware of making mistakes or finding certain things difficult, despite her seemingly confident nature.

My problems with this book occurred after some big pretty big reveals began to occur near the midway point of the story. Unfortunately, I can't mention any specifics about these or when they occurred because that would be giving away from spoilers, but suffice to say that not long after a majority of these reveals came to light, the plot began to get extremely muddled. I started to lose a lot of interest in this story as this occurred, and I suddenly felt as though this story that had been so compelling and seemed to have so much in the way of themes and promise going for it had suddenly lost all of that steam and was slowing to a stuttering, convoluted stop. There are some elements of this story that I think are meant to be a bit fuzzy and mysterious, but for me things just started going a bit haywire and I even had trouble following some of what was going on. The ending was also a bit lackluster for me and a little too predictable (not in the good way, in my opinion). I still think the first half of the book was fantastic, and I loved the atmosphere that pervaded the entire book, but the plot and characters really lost me after that midway point.

Overall, I've given The Death of Jane Lawrence three stars! If you are at all interested in this book or enjoyed Starling's other books, I would still encourage you to give it a shot since it seems as though plenty of people have loved it. My rating is based on the fact that I still mostly enjoyed reading this book and it does have promise, but I still struggled to get through the end. Still, if you're looking for something a bit spooky for your October reading, you can't go wrong with The Death of Jane Lawrence!

*I received a copy of The Death of Jane Lawrence courtesy of the publisher in exchange for an honest review.*