Review: Horseman: A Tale of Sleepy Hollow by Christina Henry 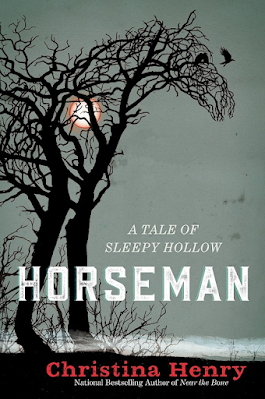 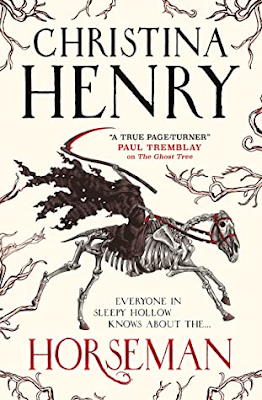 Horseman by Christina Henry
Berkley Books (US)/Titan Books (UK)
Publication Date: September 28th, 2021
Paperback. 320 pages.
About Horseman:
"Everyone in Sleepy Hollow knows about the Horseman, but no one really believes in him. Not even Ben Van Brunt's grandfather, Brom Bones, who was there when it was said the Horseman chased the upstart Crane out of town. Brom says that's just legend, the village gossips talking.
Twenty years after those storied events, the village is a quiet place. Fourteen-year-old Ben loves to play Sleepy Hollow boys, reenacting the events Brom once lived through. But then Ben and a friend stumble across the headless body of a child in the woods near the village, and the sinister discovery makes Ben question everything the adults in Sleepy Hollow have ever said. Could the Horseman be real after all? Or does something even more sinister stalk the woods?"

Horseman is a deeply mysterious and atmospheric novel set in the classic town of Sleepy Hollow and following the grandchild of Brom and Katrina, Ben. This is billed as a Sleepy Hollow retelling, but just in order to set your expectation accurately, I’d classify this more as a sequel of sorts to Sleepy Hollow, since the story doesn’t really play with the ore-established Sleepy Hollow plot, but rather takes everything and continues on with it’s own unique story and interaction with the original Sleepy Hollow story.

Horseman follows Ben as he struggles with learning more about both himself and his family as the legend of the Horseman of Sleepy Hollow seems to be rising back to popularity once again after a few vicious attacks occur in the town. Ben is told different and conflicting things about the Horseman and the town’s past and is left to question whether the stories he’s heard or real or not, how his family has played a role in those stories, and who he can trust to tell him the truth.

This story is, of course, set in the town of Sleepy Hollow, and it has a very isolated sort of atmosphere where inhabitants seem pretty cut off from the rest of the world. In fact, there are brief mentions about the fact that other parts of the worlds are different from Sleepy Hollow and it hasn’t really managed to keep up with any new trends or fashions, etc. It’s sort of stuck in this limbo with no real improvements or advancements. Christina Henry created a very successful atmosphere of mystery, intrigue, and isolation that I think worked really well with the Sleepy Hollow vibe and in creating a story that feels immersive. A great atmosphere is something I can always safely expect from Christina Henry. I can't say too much about the Horseman himself, but I loved how Henry played with the idea of the Horseman itself and sort of created different versions that terrorized the town and a specific character or two in very distinct and different ways, both tangible and non-tangible.

Ben was a captivating character follow, largely due to Henry’s thoughtful character development and insight into Ben’s own introspection that really brought him to life and let me, the reader, really get to know him and attempt to understand his struggles. Henry does an excellent job of conveying his many conflicts, including those with his grandmother who doesn’t understand or approve of his identity and behavior; his struggle to fit in or find a place within the town; his struggles with understanding what’s going on with the Horseman and trying to figure out what stories are true and what aren’t; and, finally, with his own personal identity struggles as he slowly discovers his own independence and truly learns who he is in an even deeper way than he already has. Ben wants very badly to be like his larger-than-life and commanding grandfather and is often compared to his father, so identity played a large role in this book and it was a theme that I think Henry handled exceptionally beautifully.

I will admit that this is not one of my favorite Christina Henry books (but honestly, I’m not sure if anything could be Alice or Lost Boy for me), but it is definitely a great one that I really enjoyed that I think anyone who likes an mysterious and atmospheric, character-focused story will also enjoy. I would absolutely recommend Horseman, and I personally had a great time reading it. And, as always, I am eagerly awaiting Christina Henry's next story, whatever it may be. Overall, I've given Horseman four stars!

*I received a copy of Horseman courtesy of the publisher in exchange for an honest review.*