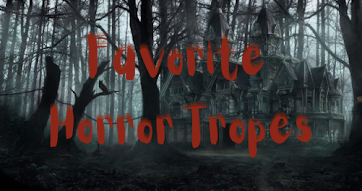 About two weeks ago I joined a Top 5 Tuesday post about some horror tropes that I didn't really care for, so I wanted to make a companion post to share some of my favorite tropes in horror (and, of course, I had to make a matching trope-y title banner!). I've really started to get more into horror in the past couple years, and I've been absolutely loving it. There are a lot of tropes that I probably have too much fun with in horror, but here's a few that tend to come to mind when I think of some horror tropes that I always tend to enjoy seeing. I'd love to hear if you like/dislike any of these tropes, and feel free to share some of your favorites as well!

This can take a lot of different forms. For instance, I love when we're in a small town or a new area and the protagonist can tell that something's just not quite right, but can't put their finger on what. Of course, usually weird and/or creepy things start happening and then it starts to get more obvious. I also love when there's a person who is by all accounts a seemingly normal person, but there's just something not quite right about them. Basically anything with a bit of a weird vibe is my favorite, especially when you can't determine why it's so weird, it just is.

This is actually probably more common in movies, but I've read some books that do this well also. You know how some books/movies will slowly sort of pan towards a scene that doesn't necessarily overtly seem horrifying or disturbing because it's so normal, but as you get closer you realize it's something you want to wash out from your eyes forever? I'm a huge sucker for that, something about the slow realization of horror in front you is just so captivating to me.

This is one of the oldest tropes out there, probably, and is a bit overused at this point, but in general theory and execution and I still find this a great one just because of how undeniably scary it is! No matter what it is you're hiding from, there's something comforting about knowing that it's outside of your house or room or wherever, so the realization that it's actually inside where you are and you don't know exactly where is just terrifying to me. Sort of like how we've had a few wasp nests since we moved into this house that were all outside and that were removed, but then we found a live, angry wasp in our bathroom one night where we used to feel safe from them (this is absolutely the same thing as finding an alien or serial killer in your bedroom, duh). No, thank you. I also think the movie Alien does this one excellently.

Going back to the basics on this one, but give me a big, spooky, crumbling mansion that's absolutely going to be haunted any day and I'm there. If a book/movie has any mention of a gothic mansion or castle or a classic haunting, I'm probably going to be at least checking it out. I can't help myself.

I like this trope in a lot of variations, whether it's the characters and audience never actually see the scary thing, or whether the characters see it, but the audience doesn't. I think the book Bird Box handled this trope perfectly, where you literally should not try to see it, because if you actually do, you are no longer going to be that helpful or lucid enough to describe it (Now, the movie took it in a few weird directions, but that's neither here nor there).

This also falls under haunted houses in general for me usually, but I love when a house is actively trying to get people to leave the house, or is simply trying to kill them. What's scarier than the big place that's supposed to be a safety net wanting to push you out, often very aggressively?

This one is very tricky to get right, in my opinion, but when done right it's really fun. I largely tend to love when ancient evils are a problem when it means we get to dive into some history and explore some legends and the like. I always love when a story means characters have to dig through old books (I know, what a surprise) or track down old locals or people who may know something. Finding old things, digging deep into the past, it's something I love in general, so when you put it into a horror atmosphere, it's just that much more fun (usually).

I don't know if this actually a trope or not, but it's hands down one of my favorite. This happens when a horror story is wrapping up and everything's either back to normal or just cleaned up to fix whatever the problem is, but then the last scene or page has something like, "but they never could figure out why that room always stayed so cold, no matter what they did" or something like that. I wish I had a good example, but you know what I mean, right?

What are some your favorite horror tropes?