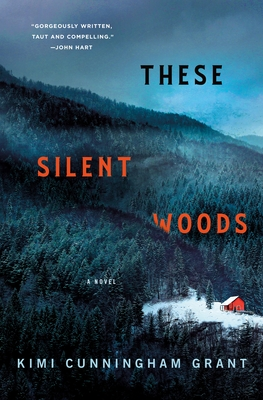 These Silent Woods by Kimi Cunningham Grant
Minotaur Books
Publication Date: October 26th, 2021
Hardcover. 288 pages.
About These Silent Woods:
"No electricity, no family, no connection to the outside world. For eight years, Cooper and his young daughter, Finch, have lived in isolation in a remote cabin in the northern Appalachian woods. And that's exactly the way Cooper wants it, because he's got a lot to hide. Finch has been raised on the books filling the cabin’s shelves and the beautiful but brutal code of life in the wilderness. But she’s starting to push back against the sheltered life Cooper has created for her—and he’s still haunted by the painful truth of what it took to get them there.
The only people who know they exist are a mysterious local hermit named Scotland, and Cooper's old friend, Jake, who visits each winter to bring them food and supplies. But this year, Jake doesn't show up, setting off an irreversible chain of events that reveals just how precarious their situation really is. Suddenly, the boundaries of their safe haven have blurred—and when a stranger wanders into their woods, Finch’s growing obsession with her could put them all in danger. After a shocking disappearance threatens to upend the only life Finch has ever known, Cooper is forced to decide whether to keep hiding—or finally face the sins of his past.
Vividly atmospheric and masterfully tense, These Silent Woods is a poignant story of survival, sacrifice, and how far a father will go when faced with losing it all."

These Silent Woods follows a father and his daughter, Cooper and Finch, respectively, as they live on their own in the woods in secrecy and do their best to avoid interacting with any other person. The first thing to note about this book is that it is not, in fact, much of a thriller. If anything, I'd call it slow-burn thriller. Since this is one of those books that very much relies on a slow reveal and spoilers are hard to avoid, I've opted to turn this into a mini review in order to highlight major likes and dislikes without giving away details!

What I liked: This was an incredibly well-written character study that really let me dive deep into the mind of a father who has been struggling with his decisions to do what he continues to think is best for his daughter. He is fully connected to reality and understands that things can't last forever, but he does his best to make sure his daughter has the best life that she can. I loved how Grant conveyed Cooper's many fears and concerns in such a visceral way, while still letting the reader come to their own opinions about what was going on. I also think Grant did a great job of setting the scene and atmosphere in a secluded area that has a slightly ominous tone, but is largely contemplative and thoughtful in nature. I also really appreciated how much detail Grant put into crafting the lifestyle of Cooper and Finch and in how they managed to maintain a relatively healthy lifestyle with every factor considered.

What I disliked: I really didn't dislike much from this story, other than the fact that I Felt as if I was slightly misled about what to expect. That being said, the story that was told was absolutely beautiful and heartbreaking and I was hooked from every page, and don't have that many criticisms. My main issues arose with a few minor plot lines that are introduced and then not fully explored. The ending was also pretty satisfying for me, but then the epilogue itself actually almost left me with more questions than I had at the last chapter, but that may just be a "me" thing. Also, I'm not sure if this was meant to be a big thing or if I'm just sensitive, but there was what seemed to be a small bit of a religious focus near the end that I wasn't expecting and didn't care for due to personal reasons. I wouldn't let this deter you from the book, but it's just something that felt a bit thrown in my face at the end and left me feeling a bit dissatisfied with some aspects.

Overall, I've given These Silent Woods four stars! I really had a great reading experience with this and will definitely keep my eye out for more books by Kimi Cunningham Grant. It was thoughtful, moving, and beautifully written.

*I received a copy of These Silent Woods courtesy of the publisher in exchange for an honest review.*