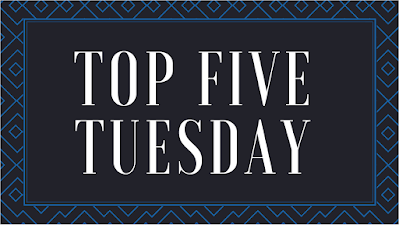 This week's topic is: Spooky Worlds

I love a good spooky world, so I figured I had to join Top 5 Tuesday once again this week to explore some spooky worlds! Below you'll find some spooky settings that I may personally love, but probably wouldn't want to visit because I'd most likely die. And probably painfully.

The portal world from T. Kingfisher's The Hollow Places
I don't recall if this portal world had any sort of name or title, but holy smokes was it a terrifying place. I'm as equally fascinated by it as I am horrified, but no way am I visiting that place. I may have a hard time getting back...

The Old City (& possibly the New City) from Christina Henry's Alice
I love reading about these cities, but frankly, too many questionable things happen for me to think I should ever visit.

The forest from In the House in the Dark of the Woods by Laird Hunt
I'll be honest, it's been quite a while since I read this book, so my memory is somewhat vague on details, but I do recall this book having a particular evil-feeling forest that I just think would be better to avoid altogether...

The Otherworld from Neil Gaiman's Coraline
I don't know if this world has an actual name or not, but it's how I tend to think of it. An alternate reality where things are both similar and completely off and dissimilar? No, thank you, I've seen how that plays out for Coraline and I will just have to pass.

Silla and Nori's aunt's house from And the Trees Crept In by Dawn Kurtagich
This one takes place in our own world, but whatever weird stuff is happening at these two sisters' aunt's house is plain creepy. I love trees, but these ones are a bit overzealous... and weird, unnatural things are happening that I'd probably rather not be present for.

Bonus: The Moors from Seanan McGuire's Down Among the Sticks and Bones
I actually might visit this world if I had a chance, but in theory I think it might be better to steer clear overall!

Have you visited any of these worlds (in books, of course)? What are some spooky worlds you like, but would probably rather not visit?