Today I'm excited to share with you all my stop on the blog tour for Alison Stine's Trashlands, a haunting, emotional, and compelling story about a future exploring the effects of dramatic climate change. Below you'll find some information about both the book and the author, as well as a brief excerpt! 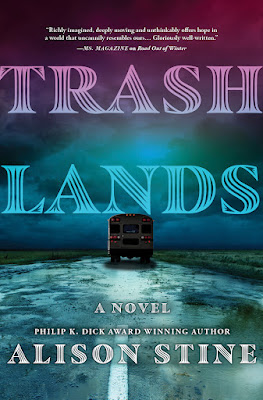 SYNOPSIS:
“A resonant, visionary novel about the power of art and the sacrifices we are willing to make for the ones we love
A few generations from now, the coastlines of the continent have been redrawn by floods and tides. Global powers have agreed to not produce any new plastics, and what is left has become valuable: garbage is currency.
In the region-wide junkyard that Appalachia has become, Coral is a “plucker,” pulling plastic from the rivers and woods. She’s stuck in Trashlands, a dump named for the strip club at its edge, where the local women dance for an endless loop of strangers and the club's violent owner rules as unofficial mayor.
Amid the polluted landscape, Coral works desperately to save up enough to rescue her child from the recycling factories, where he is forced to work. In her stolen free hours, she does something that seems impossible in this place: Coral makes art.
When a reporter from a struggling city on the coast arrives in Trashlands, Coral is presented with an opportunity to change her life. But is it possible to choose a future for herself?
Told in shifting perspectives, Trashlands is a beautifully drawn and wildly imaginative tale of a parent's journey, a story of community and humanity in a changed world." 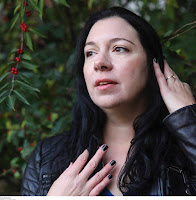 ALISON STINE is an award-winning poet and author. Recipient of an Individual Artist Fellowship from the National Endowment for the Arts (NEA), and an Ohio Arts Council grant, she was a Wallace Stegner Fellow and received the Studs Terkel Award for Media and Journalism. She works as a freelance reporter with The New York Times, writes for The Washington Post, The Atlantic, The Guardian, 100 Days in Appalachia, ELLE, The Kenyon Review, and others, and has been a storyteller on The Moth. After living in Appalachian Ohio for many years, she now lives and writes in Colorado with her partner, her son, and a small orange cat.