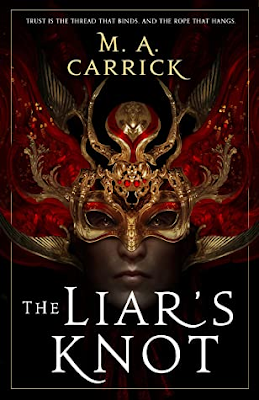 The Liar's Knot (Rook & Rose #2) by M.A. Carrick
Publication: December 7th, 2021
Orbit
Paperback. 672 pages.
Pre-order: Amazon | IndieBound
From Goodreads:
"Trust is the thread that binds us . . . and the rope that hangs us.
In Nadezra, peace is as tenuous as a single thread. The ruthless House Indestor has been destroyed, but darkness still weaves through the city’s filthy back alleys and jewel-bright gardens, seen by those who know where to look.
Derossi Vargo has always known. He has sacrificed more than anyone imagines to carve himself a position of power and influence among the nobility, hiding a will of steel behind a velvet smile. He'll be damned if he lets anyone threaten what he's built.
Grey Serrado knows all too well. Bent under the yoke of too many burdens, he fights to protect the city’s most vulnerable. Sooner or later, that fight will demand more than he can give.
And Ren, daughter of no clan, knows best of all. Caught in a knot of lies, torn between her heritage and her aristocratic masquerade, she relies on her gift for reading pattern to survive. And it shows her the web of darkness that traps her city.
But all three have yet to discover just how far that web stretches. And in the end, it will take more than knives to cut themselves free..."
I absolutely loved The Mask of Mirrors when I read it last year and have been eagerly anticipated this sequel ever since. I can't wait to finally get my hands on a copy of this! This book/series needs more love because it absolutely deserves it so far. 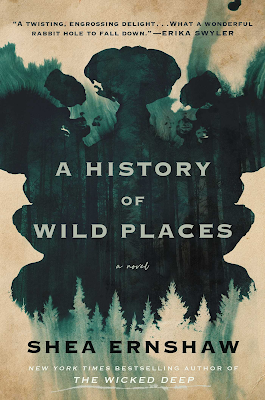 A History of Wild Places by Shea Ernshaw
Publication: December 7th, 2021
Atria Books
Hardcover. 368 pages.
Pre-order: Amazon | IndieBound
From Goodreads:
"The New York Times bestselling author of The Wicked Deep weaves a richly atmospheric adult debut following three residents of a secluded, seemingly peaceful commune as they investigate the disappearances of two outsiders.
Travis Wren has an unusual talent for locating missing people. Hired by families as a last resort, he requires only a single object to find the person who has vanished. When he takes on the case of Maggie St. James—a well-known author of dark, macabre children’s books—he’s led to a place many believed to be only a legend.
Called Pastoral, this reclusive community was founded in the 1970s by like-minded people searching for a simpler way of life. By all accounts, the commune shouldn’t exist anymore and soon after Travis stumbles upon it…he disappears. Just like Maggie St. James.
Years later, Theo, a lifelong member of Pastoral, discovers Travis’s abandoned truck beyond the border of the community. No one is allowed in or out, not when there’s a risk of bringing a disease—rot—into Pastoral. Unraveling the mystery of what happened reveals secrets that Theo, his wife, Calla, and her sister, Bee, keep from one another. Secrets that prove their perfect, isolated world isn’t as safe as they believed—and that darkness takes many forms.
Hauntingly beautiful, hypnotic, and bewitching, A History of Wild Places is a story about fairy tales, our fear of the dark, and losing yourself within the wilderness of your mind."
I haven't read any books from Shea Ernshaw yet and I'm very intrigued by the premise of this one. I'm always down some reclusive communities with some weird characters!
What do you think about these upcoming releases? What are your anticipated upcoming releases?
Posted by Jordan @ForeverLostinLiterature at 2:00 AM