Review: All of Us Villains by Amanda Foody & Christine Lynn Herman 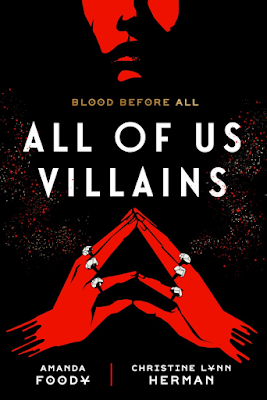 All of Us Villains by Amanda Foody & Christine Lynn Herman
Tor Teen
Publication Date: November 9th, 2021
Hardcover. 400 pages.
About All of Us Villains:
"The Blood Moon rises. The Blood Veil falls. The Tournament begins.
Every generation, at the coming of the Blood Moon, seven families in the remote city of Ilvernath each name a champion to compete in a tournament to the death.
The prize? Exclusive control over a secret wellspring of high magick, the most powerful resource in the world--one thought long depleted.
This year, thanks to a salacious tell-all book, the seven champions are thrust into worldwide spotlight, granting each of them new information, new means to win, and most importantly: a choice - accept their fate or rewrite their story.
But this is a story that must be penned in blood."

All of Us Villains is an exciting and cutthroat new fantasy that is sure to satiate your competition trope love.

Every time a Blood Moon occurs, seven magick families send one chosen member of the family to a fight to the death. The reason for this fight? To decide which family receive sole claim over the High Magick of Ilvernath until the next tournament. This book will probably have a hard time getting away from Hunger Games comparisons, which is understandable, but it definitely stands on its own and sets itself apart.

We follow Alistair, Isobel, Gavin, and Briony as champions (mostly?) of each of their respective families. Alistair is the assumed winner based on the fact that his family, the Lowes, have maintained control of Ilvernath's High Magick for the past two tournaments in a row. Isobel, Gavin, and Briony each have their own reasons for wanting (or not wanting) to be in this competition, and I found their POVs equally interesting. I really appreciated how much time the authors put into developing each of the seven families' histories and personalities, as it really let me better understand how they interacted with the other contestants, as well as interacted with their families, throughout the story. I also loved getting to know each family's reputation and seeing the dastardly things they all seem to be a part of–some far more cruel than others. One of the things that I found most entertaining and compelling in this book was getting to explore each contestant's motives, methods, and reactions to the other contestants as they all strategize to win–or at least survive as long as possible–and I think that really came through in this character-driven story.

All of Us Villains is a compelling version of the popular competition trope, and I really appreciated the innovative turns that Foody and Herman took with this story. I liked that the entire competition and atmosphere of the book were shrouded in a darkness that lent itself perfectly to the violent nature of the competition, and I think the authors descriptions of the characters, landscapes, and buildings complemented the gloomy setting perfectly. I think November is a perfect time to release this book, as it feels very much like a moody fall read. All that being said, I will say that I think one thing that felt slightly lacking was that the book was advertised as being very dark and intense–which the descriptions and atmosphere of the book match–but it just didn't always quite live up to that in places where it could have. It's hard for me to explain this without mentioning spoilers, but I'll just say that our characters act delightfully bloodthirsty in most cases, but they don't always live up to that image in the reality, and some of their actions felt slightly out of character at times.

Although I enjoyed many of the points I've mentioned above, I did have a few minor issues with some rather prominent parts of this book: namely, the worldbuilding and the magic system. This book doesn't have too much physical world to build since it takes place in only a few main places, but even with that I never felt fully grounded in this world. I was confused about some of the spatial layout of the places mentioned throughout, such as the location of the competition grounds compared to the town, etc., and this left me feeling a bit lost at times. My issue with the magic system was similar in the sense that I never felt as though I fully knew how it worked. Various aspects of it are explained in some detail, but more practical elements such as how it's used, are not. I would like to know a bit more about the practical applications of the magick and how it is used.

Overall, I've given All of US Villains 3.75 stars! This was a very entertaining read and I'm glad I was given the opportunity to check it out. I would definitely be curious to read the next book in this series despite some of the issues I had, as I really enjoyed getting to know the characters and I'm curious to see how the story and world may expand in future books. If you are a fan of competition tropes or character-driven fantasy, then I would absolutely recommend this one.

*I received a copy of All of Us Villains courtesy of the publisher in exchange for an honest review.*

Email ThisBlogThis!Share to TwitterShare to FacebookShare to Pinterest
Labels: all of us villains, amanda foody, christine lynn herman, review