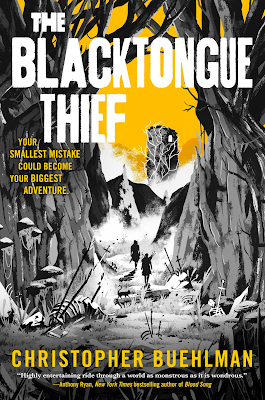 The Blacktongue Thief by Christopher Buehlman
Tor Books
Publication Date: May 25th, 2021
Hardcover. 416 pages.
About The Blacktongue Thief:
"Kinch Na Shannack owes the Takers Guild a small fortune for his education as a thief, which includes (but is not limited to) lock-picking, knife-fighting, wall-scaling, fall-breaking, lie-weaving, trap-making, plus a few small magics. His debt has driven him to lie in wait by the old forest road, planning to rob the next traveler that crosses his path.
But today, Kinch Na Shannack has picked the wrong mark.
Galva is a knight, a survivor of the brutal goblin wars, and handmaiden of the goddess of death. She is searching for her queen, missing since a distant northern city fell to giants.
Unsuccessful in his robbery and lucky to escape with his life, Kinch now finds his fate entangled with Galva's. Common enemies and uncommon dangers force thief and knight on an epic journey where goblins hunger for human flesh, krakens hunt in dark waters, and honor is a luxury few can afford."

I've heard people talking about The Blacktongue Thief ever since it came out last year and had been interested in it, but found myself hesitant because of some of the comments I'd heard about it being a bit meandering and compared to Kings of the Wyld, which can sometimes not hit quite right with me. Still, when I saw the audiobook on sale a while back I figured it was a great opportunity to try it. The Blacktongue Thief's audiobook was so fun, and after listening to it I can that I think this was one of those books where I really don't know if I would have enjoyed it as much reading a physical copy, but the audiobook was so well done and fit the tone of the book so perfectly that I read through it in no time.

This story follows Kinch Na Shannack, a trained thief who seems to get himself into a bit of trouble. When Kinch tries to find new marks to help himself out of debt, he ends up running into a woman named Galva, and this is where things really start to take off as they embark on quite an adventure together. Along the way, we come across countless new characters, settings, beasts–it's almost impossible to really get bored of anything in this book because there is always something new coming along. Kinch's rather snarky personality worked perfectly for me and I had more than a few chuckles while reading this book. He knows when to be serious (not often) and always has something to say, whether it's welcome or not. The best thing about Kinch's personality, in my opinion, is that he's not only witty in a humorous way, but also a clever way to where he knows how to handle different people and situations. He may not always seem like the most capable person, but he really is an intelligent person who I wouldn't necessarily hate having on my side.

The audiobook is narrated by Christopher Buehlman himself, and I'll admit that I was a little hesitant when I first started the book due to his choice to use a heavy Irish accent, which I knew would either become extremely annoying or extremely endearing pretty quickly–and fortunately it grew on me and was perfect for the story. He did a perfect job of capturing the sort of casual, down-to-earth tone of his protagonist narrator. I have no doubt that this accent choice will annoy a lot of potential readers, so I'm glad it ended up working out for me! There are also quite a few moments where there is some singing in this book, such a tavern/bard-like singing, and those are actually sung to us. I wasn't sure how I felt about that, but it worked out.

This was a book that I could just sit back and enjoy, there was nothing overly intense that I had to focus on that made me ever hesitate to put this book on. Some books I find myself hesitating slightly to listen to if they are a bit darker or heavy, when sometimes I just need a break from that. The Blacktongue Thief was an adventure with a huge variety of characters that had some great action scenes, some great dialogue, and a truly fun story. It doesn't take itself too seriously, and I love that. Don't get me wrong– The Blacktongue Thief is more than just fun and actually handles a wide variety of themes and ideas in its own irreverent way, but it was never overbearing or felt heavy-handed.

Now, as I've made clear, from an entertainment standpoint this book is a five star read, and that might be enough for some, but I do have a few issues with the story itself. For one, I do agree with the comments I've heard about it being a bit meandering, as I did at times find the plot somewhat buried by what felt like extended or more random scenes. For all that, it's a pretty fast-paced story and I was surprised by how quickly it moved. I felt as though I didn't always fully get to immerse myself in certain aspects of the book before it would move on or jump to something else. The plus side is that everything was so entertaining that I was able to still have a good time with this book regardless of those issues, which I think would have bothered me far more if I were reading the physical copy, so take from that what you will. I also very much feel that if you are someone who does not connect with Kinch's humor by the 30-40% mark, you probably won't after that. It took me a little while, but if it hadn't grown on me I probably would not have enjoyed this book much nearly as much as I did.

Overall, I've given The Blacktongue Thief 4.25 stars! I wasn't sure what to rate this since it was mainly the audiobook that I enjoyed, but it is one that I would absolutely recommend anyone to try out because if you like it, you're going to have a lot of fun.

*I received a copy of The Blacktongue Thief courtesy of the publisher and NetGalley in exchange for an honest review.*