Can't-Wait Wednesday: The Girl Who Fell Beneath the Sea by Grace Axie Oh & Paradox Hotel by Rob Hart 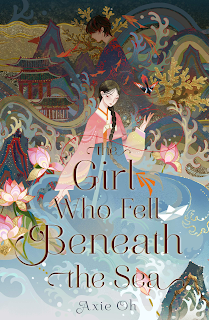 From Goodreads:
"Deadly storms have ravaged Mina’s homeland for generations. Floods sweep away entire villages, while bloody wars are waged over the few remaining resources. Her people believe the Sea God, once their protector, now curses them with death and despair. In an attempt to appease him, each year a beautiful maiden is thrown into the sea to serve as the Sea God’s bride, in the hopes that one day the “true bride” will be chosen and end the suffering.
Many believe that Shim Cheong, the most beautiful girl in the village—and the beloved of Mina’s older brother Joon—may be the legendary true bride. But on the night Cheong is to be sacrificed, Joon follows Cheong out to sea, even knowing that to interfere is a death sentence. To save her brother, Mina throws herself into the water in Cheong’s stead.
Swept away to the Spirit Realm, a magical city of lesser gods and mythical beasts, Mina seeks out the Sea God, only to find him caught in an enchanted sleep. With the help of a mysterious young man named Shin—as well as a motley crew of demons, gods and spirits—Mina sets out to wake the Sea God and bring an end to the killer storms once and for all.
But she doesn’t have much time: A human cannot live long in the land of the spirits. And there are those who would do anything to keep the Sea God from waking…"
This sounds so magical and exciting, I am really excited to hopefully have a chance to check it out! I am so dazzled by that beautiful cover, as well.
and... 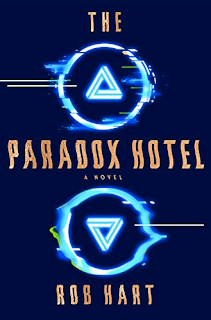 From Goodreads:
"A locked-room murder mystery set at a hotel for time travelers—in which a detective must solve an impossible crime even as her own sanity crumbles—from the author of The Warehouse. For someone with January Cole’s background, running security at a fancy hotel shouldn’t be much of a challenge.
Except the Paradox is no ordinary hotel. Here, the ultra-wealthy guests are costumed for a dozen different time periods, all anxiously waiting to catch their “flights” to the past. And proximity to the timeport makes for an interesting stay. The clocks run backwards on occasion—and, rumor has it, ghosts stroll the halls.
Now, January’s job is about to get a whole lot harder. Because the U.S. government is getting ready to privatize time-travel technology—and a handful of trillionaires have just arrived to put down their bids.
Meanwhile there’s a blizzard rolling in, and the timestream’s acting strange. Which means nobody’s leaving until further notice.
And there’s a murderer on the loose.
Or at least, that’s what January suspects. Except the corpse in question is one that somehow only she can see. And the accidents stalking their prestigious guests…well, the only way a killer could engineer those is by operating invisibly and in plain sight, all at once. Which is surely impossible.
There’s a reason January can glimpse what others can’t. But her ability is also destroying her grip on reality—and forcing her to confront secrets of her own.
Because here at the Paradox Hotel, the past is waiting around every corner.
At once a dazzlingly time-twisting murder mystery and a story about grief, memory, and what it means to—literally—come face to face with our ghosts, The Paradox Hotel is another unforgettable speculative thrill-ride from acclaimed author Rob Hart."
I've already read an ARC of this and thought the premise was so cool! I'm really excited for this to finally makes it way into the world and hear what others think of it.
What do you think about these upcoming releases? What are your anticipated upcoming releases?
Posted by Jordan @ForeverLostinLiterature at 2:00 AM

Email ThisBlogThis!Share to TwitterShare to FacebookShare to Pinterest
Labels: cww, paradox hotel, rob hart, the girl who beneath the sea