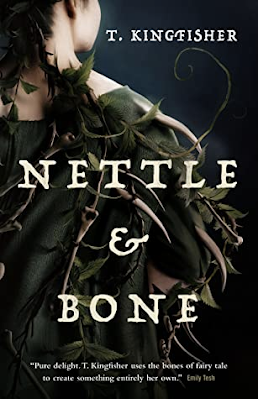 Nettle & Bone by T. Kingfisher
Publication: April 26th, 2022
Tor Books
Hardcover. 256 pages.
Pre-order: Amazon | Bookshop.org
From Goodreads:
"After years of seeing her sisters suffer at the hands of an abusive prince, Marra—the shy, convent-raised, third-born daughter—has finally realized that no one is coming to their rescue. No one, except for Marra herself.
Seeking help from a powerful gravewitch, Marra is offered the tools to kill a prince—if she can complete three impossible tasks. But, as is the way in tales of princes, witches, and daughters, the impossible is only the beginning.
On her quest, Marra is joined by the gravewitch, a reluctant fairy godmother, a strapping former knight, and a chicken possessed by a demon. Together, the five of them intend to be the hand that closes around the throat of the prince and frees Marra's family and their kingdom from its tyrannous ruler at last."
I've read and loved two books of T. Kingfisher's and I am so excited for this latest release! This seems like a really intriguing premise and I have no doubt that it will be amazing in Kingfisher's hands. 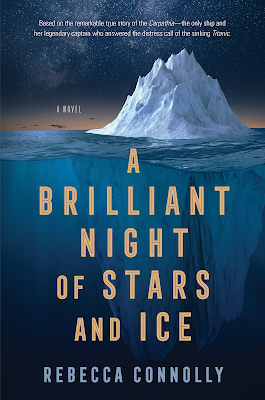 A Brilliant Night of Stars and Ice by Rebecca Connolly
Publication: April 5th, 2022
Shadow Mountain
Hardcover. 320 pages.
Pre-order: Amazon
From Goodreads:
"Based on the remarkable true story of the Carpathia—the one ship and her legendary captain who answered the distress call of the sinking Titanic.
Shortly after midnight on April 15, 1912, the captain of the Carpathia, Arthur Rostron, wakes to a distress signal from the Titanic, which has struck an iceberg on its maiden voyage. Though information is scarce, Rostron leaps into action, determined to answer the call for help. But the Carpathia is more than four hours away, and there are more questions than answers: Will his ship hold together if pushed to never-before-tested speeds? What if he also strikes an iceberg? And with the freezing temperatures, will there be any survivors by the time the Carpathia arrives?
Kate Connolly is a third-class passenger on Titanic, and she is among the last to receive instruction and help after it hits an iceberg. Despite the chaos of abandoning ship, Kate is able to board a lifeboat, though after seeing the Titanic sink into the abyss and hearing the cries from hundreds of people still in the water, she wonders if any rescue is even possible.
Told in alternating chapters from both Captain Rostron and Kate Connolly."
I haven't heard too much about this book, but I'm really intrigued by the premise of being from the POV of the captain of the Carpathia--definitely something I haven't really seen before!