Today I am excited to be sharing with you all the second of two recent interviews I've been fortunate enough to share, and this one features the incredible R.S. Ford, author of the recent epic fantasy release Engines of Empire! Once again, I have both R.S. Ford himself and Angela Man at Orbit to thank for this incredible opportunity, and I could not be more grateful for it.

If I’m not mistaken, this is your third fantasy series. How would you say this series is similar to and/or departs from your previous works? Have your experiences writing in the SFF genres influenced your current writing from past works?

RF: Technically my fourth (Kultus, my first novel, was meant to be the start of a series but that never happened) but who’s counting? This is certainly the most expansive series I’ve started so far, both in the scope of the world and conflict, and page length.

Previously I’ve been focused very much on character, and writing from a relatively ‘micro’ point of view. As much as The Age of Uprising focuses on character, it details a continent-spanning conflict, and will be much more ‘macro’ in its scale. Saying that, the first book does, more or less, focus on members of one family, although book two will see that widen out a little.

I’ve certainly learned a lot from the previous seven novels I’ve written. I probably started the first book in the Steelhaven series with too many characters off the bat. It would have helped by focusing on fewer characters at the start, and perhaps introducing further POVs later in the story. For the War of the Archons series I spent a lot of time flitting around the timeline, and included a few too many flashbacks. In hindsight it may have benefitted from a more linear approach. Consequently, Engines of Empire is a much more focused and linear story, despite the fact it’s the longest novel I’ve written.

I’m sure you get asked this a lot, but is there anything in particular that inspired your creation of The Age of Uprising series?

RF: Nothing ‘in particular’. This series, as with everything I write, is the product of a host of influences from a wide variety of media. I knew I wanted to step out of the traditional ‘medieval fantasy’ mould, so there is a heavy steampunk element to the worldbuilding. The strong familial elements are as much influenced by Peaky Blinders and Boardwalk Empire, as they are by, say, Game of Thrones. Anyone who reads the novel will see familiar tropes, but I don’t think tropes are anything to be scared of. Nothing is ever truly original, and it’s always fun to see how different writers put their own spin on common themes.

I was really pulled in by many of the themes you explore in Engines of Empires, from imperialistic elements to more personal familial struggles–do you find that there are often set themes you know you want to explore when writing, or do they tend to evolve as you go (or a bit of both?)

RF: Theme is never something I’m conscious of during the writing phase. If I look back at my work I can often identify it, lurking there in the shadows, but it’s generally a subconscious thing. I wrote the Steelhaven series in the immediate aftermath of my father’s death. It wasn’t until I looked back at the series years later that I realised there’s a strong thematic thread involving fathers and their legacies in those books. A lot of the characters are living up to, and driven forward by, paternal expectations.

You’re right that Engines of Empire does have imperialistic elements – it would be difficult to write a book with the word ‘Empire’ in the title and not touch upon colonial themes. But that’s more a framework for the novel rather than a thematic commentary on empire. It doesn’t take me (a white guy from Britain) to write a fantasy novel for people to realise colonialism is bad – we all know invading other people’s countries and taking their stuff is inherently evil.

Similarly, the familial themes, along with others, are simply a common thread for people to connect to (everyone has problems with family, for instance). I think including mundane elements everyone has experience of helps the reader connect to the characters, even if they are in a world with giant eagles and magic-fuelled war machines.

Many epic fantasy books tend to have multiple POVs, but not always. Did you know from the time you started writing Engines of Empire that you wanted it to be a multiple POV story? And along those lines, did you always know which characters you wanted to write perspectives from, or did it change around throughout the writing process?

RF: I think pretty much everything I’ve written (apart from the few short stories) has been a third-person multi-POV narrative. There’s just something about telling a story from varying perspectives that I’m drawn to, in both reading and writing.

And no, I didn’t have all the POVs down from the start. When I was working on the original partial manuscript to pitch to publishers Conall Hawkspur, the eldest sibling, wasn’t in the story at all, and a servant of the Hawkspur Guild was included instead. When reviewing the partial I realised I wanted a character with a little bit more ‘bite’ than the other members of the family, and so Conall was born, and the family’s servant was sadly erased from existence.

How do you go about getting into the minds of your characters? Do you write one character at a time to immerse yourself or do you end up jumping around more chronologically?

RF: The initial writing phase invariably sees me write the MS chronologically. However, there will always be at least one editing pass where I will read the individual POV chapters in a block to maintain consistency of voice and narrative flow. If you can pick out a particular character’s chapters, and their story arc makes a fairly cohesive novella on its own, you’ve pretty much nailed it.

There are a lot of different settings and components (magic and otherwise) to this world. How did you go about constructing this world? Do you tend to create your worlds with hard rules from the start, or do you sort of develop more as you go?

RF: A bit of both. With this series, certainly more than any other, I spent a long time on the worldbuilding before I’d started drafting the manuscript. Previously, I’ve always worked on story and character first, and let the worldbuilding develop organically around it. With this series they basically informed one another as the plot evolved. Since this series has so many different systems of magic, it was important that the rules were nailed down, at least in principle, before I started.

While reading Engines of Empire, I found myself appreciating the more ‘traditional’ fantasy feel it has, it was great sitting down and diving into something truly epic in scope. Do you find any sort of preference for writing epic vs. ‘non-epic’ works?

RF: While reading Engines ofNot really. While writing this series, I’m also writing a historical fiction trilogy, which for the most part is focused on a single character (the first book is Oath Bound written as Richard Cullen). I’m actually enjoying the process of both, and switching between the ‘epic’ and the ‘non-epic’ is a nice change of pace.

RF: As with my other series, I get the most joy from writing irreverent characters – the ones who speak their mind, and say the things no one else dares. So I guess with this series it would be Sted, Conall’s intractable lieutenant, who isn’t even one of the main POVs. Maybe I should promote her one day.

RF: I guess it’s okay to tease the fact that book two in The Age of Uprising series will feature two new POV characters who have appeared in minor (but critical) roles in book one. They’ll help expand the narrative outside the Hawkspur bubble a little more. Beyond that, my lips are sealed!

About Engines of Empire: 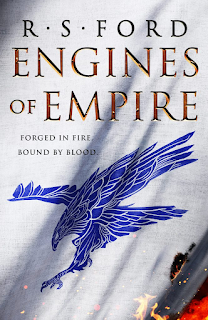 The nation of Torwyn is run on the power of industry, and industry is run by the Guilds. Chief among them are the Hawkspurs, and their responsibility is to keep the gears of the empire turning. It’s exactly why matriarch Rosomon Hawkspur sends each of her heirs to the far reaches of the nation.
Conall, the eldest son, is sent to the distant frontier to earn his stripes in the military. It is here that he faces a threat he could have never seen coming: the first rumblings of revolution.
Tyreta’s sorcerous connection to the magical resource of pyrstone that fuels the empire’s machines makes her a perfect heir–in theory. While Tyreta hopes that she might shirk her responsibilities during her journey one of Torwyn’s most important pyrestone mines, she instead finds the dark horrors of industry that the empire would prefer to keep hidden.
The youngest, Fulren, is a talented artificer, and finds himself acting as consort to a foreign emissary. Soon after, he is framed for a crime he never committed. A crime that could start a war.
As each of the Hawkspurs grapple with the many threats that face the nation within and without, they must finally prove themselves worthy–or their empire will fall apart.
Paperback. 624 pages. Orbit.
Buy: Amazon | Bookshop.org
Posted by Jordan @ForeverLostinLiterature at 2:00 AM