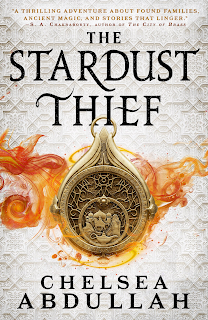 The Stardust Thief by Chelsea Abdullah
Publication: May 17th, 2022
Orbit
Hardcover. 480 pages.
Pre-order: Amazon | Bookshop.org
From Goodreads:
"Neither here nor there, but long ago…
Loulie al-Nazari is the Midnight Merchant: a criminal who, with the help of her jinn bodyguard, hunts and sells illegal magic. When she saves the life of a cowardly prince, she draws the attention of his powerful father, the sultan, who blackmails her into finding an ancient lamp that has the power to revive the barren land—at the cost of sacrificing all jinn.
With no choice but to obey or be executed, Loulie journeys with the sultan’s oldest son to find the artifact. Aided by her bodyguard, who has secrets of his own, they must survive ghoul attacks, outwit a vengeful jinn queen, and confront a malicious killer from Loulie’s past. And, in a world where story is reality and illusion is truth, Loulie will discover that everything—her enemy, her magic, even her own past—is not what it seems, and she must decide who she will become in this new reality.
Inspired by stories from One Thousand and One Nights, The Stardust Thief weaves the gripping tale of a legendary smuggler, a cowardly prince, and a dangerous quest across the desert to find a legendary, magical lamp."
I am absolutely in love with the sound of this book. I love stories inspired by One Thousand and One Nights! I've already read an ARC of this one by this point and am curious to hear everyone's thoughts once it's out!
and... 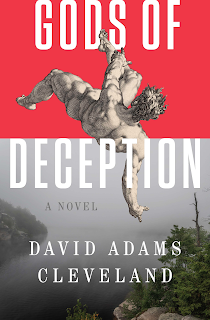 Gods of Deception by David Adams Cleveland
Publication: May 17th, 2022
Greenleaf Book Group Press
Hardcover. 928 pages.
Pre-order: Amazon | Bookshop.org
From Goodreads:
"At age ninety-five, Judge Edward Dimock, patriarch of his family and the man who defended accused Soviet spy Alger Hiss in the famous 1950 Cold War “trial of the century,” is writing his memoir at his fabled Catskill retreat, Hermitage, with its glorious Italian Renaissance ceiling. Judge Dimock is consumed with doubts about the troubling secrets he’s kept to himself for over fifty years—secrets that might change both American history and the lives of his entire family. Was his client guilty of spying for Stalin or not? And if guilty, did Hiss’s crimes go far beyond his perjury conviction—a verdict that divided the country for a generation? ​
Dimock enlists his grandson, George Altmann, a brilliant Princeton astrophysicist, in the quest for truth. Reluctantly, George finds himself drawn into the web of deceit that has ravaged his family, his curiosity sparked by a string of clues found in the Judge’s unpublished memoir and in nine pencil sketches of accused Soviet agents pinned to an old corkboard in his grandfather’s abandoned office. Even more dismaying, the drawings are by George’s paternal grandfather and namesake, a once-famous painter who covered the Hiss trial as a courtroom artist for the Herald Tribune, only to die in uncertain circumstances in a fall from Woodstock’s Fishkill Bridge on Christmas Eve 1949. Many of the suspected spies also died from ambiguous falls (a KGB specialty) or disappeared behind the Iron Curtain—and were conveniently unable to testify in the Hiss trial.
George begins to realize the immensity of what is at stake: deceptive entanglements that will indeed alter the accepted history of the Cold War—and how he understands his own unhappy Woodstock childhood, growing up in the shadow of a rumored suicide and the infidelities of an alcoholic father, a roadie with The Band.
In Gods of Deception, acclaimed novelist David Adams Cleveland has created a multiverse all its own: a thrilling tale of espionage, a family saga, a stirring love story, and a meditation on time and memory, astrophysics and art, taking the reader on an unforgettable journey into the troubled human heart as well as the past—a past that is ever present, where the gods of deception await our distant call."
This is one behemoth of a book, but I am so intrigued by it and have been looking for a new epic literary book for a while. I was fortunate enough to have a copy sent to me of this one and I know it's going to take a while to get through, but I'm excited!
What do you think about these upcoming releases? What are your anticipated upcoming releases?
Posted by Jordan @ForeverLostinLiterature at 2:00 AM