Nonfiction Mini-Reviews: The Lost City of the Monkey God by Douglas Preston & Ghost on the Throne by James Romm 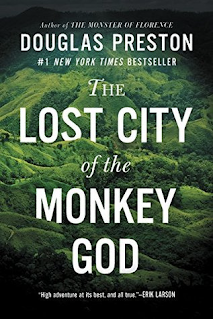 The Lost City of the Monkey God by Douglas Preston
Grand Central Publishing
Publication Date: September 5th, 2017
Paperback. 326 pages.
About The Lost City of the Monkey God:
"Since the days of conquistador Hernán Cortés, rumors have circulated about a lost city of immense wealth hidden somewhere in the Honduran interior, called the White City or the Lost City of the Monkey God. Indigenous tribes speak of ancestors who fled there to escape the Spanish invaders, and they warn that anyone who enters this sacred city will fall ill and die. In 1940, swashbuckling journalist Theodore Morde returned from the rainforest with hundreds of artifacts and an electrifying story of having found the Lost City of the Monkey God-but then committed suicide without revealing its location.
Three quarters of a century later, bestselling author Doug Preston joined a team of scientists on a groundbreaking new quest. In 2012 he climbed aboard a rickety, single-engine plane carrying the machine that would change everything: lidar, a highly advanced, classified technology that could map the terrain under the densest rainforest canopy. In an unexplored valley ringed by steep mountains, that flight revealed the unmistakable image of a sprawling metropolis, tantalizing evidence of not just an undiscovered city but an enigmatic, lost civilization.
Venturing into this raw, treacherous, but breathtakingly beautiful wilderness to confirm the discovery, Preston and the team battled torrential rains, quickmud, disease-carrying insects, jaguars, and deadly snakes. But it wasn't until they returned that tragedy struck: Preston and others found they had contracted in the ruins a horrifying, sometimes lethal-and incurable-disease."
The Lost City of the Monkey God is a nonfiction account from author Douglas Preston about the archeological exploration of a site known as The White City in the La Mosquitia region in Honduras. Douglas Preston was part of a group of researchers and scientists chosen to journey to La Mosquitia to rediscover this “lost city” after radar mapping in 2015 showed evidence of the city somewhere in the jungle and this book is his account of that experience, including a history of the region, its inhabitants, culture, the dangers of the jungle, and much more.

What I liked: First of all, I loved Preston's respect for Honduras, its people, culture, history, and archaeology and artifacts. It means a lot to me that he was careful to include the many multi-faceted components that surround an exploration of an ancient civilization in a region often neglected by the rest of the world.  Preston also has a lot of great, vivid descriptions of the land and forest that brought everything to life and encouraged me to get online and look up more images of this region. He went into a lot of detail about the dangers of the area, from snakes, bugs, etc., and I think it’s safe to say that I should probably not plan a visit. There was also a bit of a medical issue regarding a parasite, leishmaniasis, that all of the explorers dealt with after the exploration that he went into a lot of depth about near the latter portion of the book. I found this section equally fascinating and horrifying. I appreciated his discussion about negative associations with the terms ”lost city," "discovery," etc. and how these are misleading and sometimes offensive topics to talk about when these cities have such long histories. Lastly, I really appreciated Preston's ‘can-do’ attitude and willingness to get out of his comfort zone and explore, as it really added some adventure and allowed him to get a closer look to better share with readers.

What I didn't like: I would’ve loved to explore the uncovered city site and discoveries more, as I felt the ratio of history/exploration/etc. was not equal to the amount of discussion on what was actually found. That being said, I also understand the limitations in writing about what’s there when research was still ongoing, and I wouldn’t say what was there was “lacking.” The formatting could also have been tightened up a bit and had less jumping around. I would also say that the “history” portion of the White City and previous attempts to “discover” it in the beginning half of the book leading up to Preston’s journey was rather long and, and interesting as some of this section was, could have been edited down a bit to keep the narrative flowing. 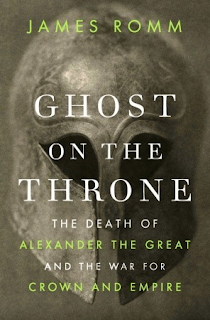 Ghost on the Throne: The Death of Alexander the Great and the War for Crown and Empire by James Romm
Alfred A. Knopf
Publication Date: October 11th, 2011
Hardcover. 411 pages.
About Ghost on the Throne:
"Alexander the Great, perhaps the most commanding leader in history, united his empire and his army by the titanic force of his will. His death at the age of thirty-two spelled the end of that unity.
The story of Alexander's conquest of the Persian empire is known to many readers, but the dramatic and consequential saga of the empire's collapse remains virtually untold. It is a tale of loss that begins with the greatest loss of all, the death of the Macedonian king who had held the empire together.
Alexander bequeathed his power, legend has it, 'to the strongest,' leaving behind a mentally damaged half brother and a posthumously born son as his only heirs. In a strange compromise, both figures, Philip III and Alexander IV, were elevated to the kingship, quickly becoming prizes, pawns, fought over by a half-dozen Macedonian generals. Each successor could confer legitimacy on whichever general controlled him.
James Romm, brilliant classicist and storyteller, tells the galvanizing saga of the men who followed Alexander and found themselves incapable of preserving his empire. The result was the undoing of a world, formerly united in a single empire, now ripped apart into a nightmare of warring nation-states struggling for domination, the template of our own times."
Ghost on the Throne is a nonfiction history book about the tumultuous period of time that occurred directly after Alexander the Great’s death when much of the future of the region what still up in the air. Many history books tend to focus on Alexander the Great’s reign and impact after death, but many fail to really dive deeply into the fight for power and supremacy in the years after his death when succession was not easily determined.

What I liked: First and foremost, I have to say how much I appreciated reading a book that covered this period of history in such detail and with such care, because the author is right in that most more readily available resources do not spend much time in this period. I’ve studied quite a bit over my years studying Classics, as he was one of those figures that particularly intrigued me, and I appreciated seeing this post-death situation in depth, including how his relationships with people impacted the conflict and how much his rule and influence had spread. I really liked how Romm formatted this book, focusing on key players as they fit into the narrative and influenced events after Alexander’s death. There was plenty of nuance available in analyzing these figures and the potential motivations or relationships at play that would impact actions. This was a particularly dramatic period of time–I mean, Ptolemy I literally stole Alexander’s funerary cart (with his body) on its way back to Macedonia and rerouted it to Egypt where Ptolemy decided to have him buried in Memphis for his own benefit–and it only gets crazier. This is a great book for concrete source material for research or educational purpose, but it also reads really easily and I think would be a very accessible read for anyone not in the Classics field.

What I didn't like: I don’t have too many complaints about this book, but I do think it was slightly repetitious at times. I’ve found it’s fairly common for historical nonfiction books to really hammer home certain points, but I still found it a bit repetitive to hear repeated comments about certain historical figures. There was also a lot of information given constantly, and I could see it being a little overmuch at times. There are a lot of moving parts at play to keep track of, so it was sometimes a little difficult to follow and keep track of things, but I have to give Romm credit for attempting to organize it as best as possible. Despite this being in the “didn’t like” section of this review, I still think it’s very accessible for everything that has to be covered!