Today, I am pleased to share with you all my stop on the blog tour for Jennifer Saint's most recent release, Elektra, which is on sale now!

Last year, I read Jennifer Saint's debut novel Ariadne and really enjoyed it and appreciated Saint's incredible work in retelling the story of a lesser known figure in Greek myth who I feel is overlooked quite often. I was excited to see that Saint was back this year with another Greek myth retelling to dive into, this time featuring the cursed House of Atreus. The Greek tragedy "Agamemnon" by Aeschylus is one of my favorite Greek tragedies and is actually one I translated while studying Greek, so I was really looking forward to reading this retelling, especially since it was in the hands of an author I already enjoyed and respected! Below you will find some general information about the book as well as my own review, so be sure to read on and check it out. :) 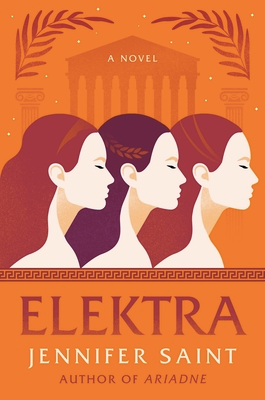 SYNOPSIS:
“The House of Atreus is cursed. A bloodline tainted by a generational cycle of violence and vengeance. This is the story of three women, their fates inextricably tied to this curse, and the fickle nature of men and gods.
Clytemnestra
The sister of Helen, wife of Agamemnon - her hopes of averting the curse are dashed when her sister is taken to Troy by the feckless Paris. Her husband raises a great army against them, and determines to win, whatever the cost.
Cassandra
Princess of Troy, and cursed by Apollo to see the future but never to be believed when she speaks of it. She is powerless in her knowledge that the city will fall.
Elektra
The youngest daughter of Clytemnestra and Agamemnon, Elektra is horrified by the bloodletting of her kin. But, can she escape the curse, or is her own destiny also bound by violence?"

Review:
Elektra tells the story of three women tied to the House of Atreus, a family line that has been plagued by a curse of violence for generations. In this story, we visit a time before the Trojan War when Clytemnestra and Helen were just two sisters of Sparta preparing for marriage, we visit the time of the Trojan War and everything that occurs within it, and we finally visit the time after the Trojan War when King Agamemnon returns home to Clytemnestra and the Greek world must go back to their regular way of life.
In Elektra, we follow three women who are a part of this myth: Cassandra, the cursed seer; Clytemnestra, a daughter of Spartan rulers who is wed to the king Agamemnon of Mycenae; and Elektra, daughter of Clytemnestra and Agamemnon who is left behind with her mother in Mycenae when Agamemnon goes off to fight in what would be the Trojan War.
I appreciated Saint's candid portrayal of Clytemnestra in showing how her actions and motivations are both understandable and extreme in varying circumstances. Saint makes it easy to follow along with Clytemnestra's character development and gradual evolution as she is affected by various experiences in her life, and particularly a traumatic one involving the death of one of her daughters.
I also really liked having a POV from Cassandra, as she is always a figure that has intrigued me and that I’ve connected with for some reason. She was cursed by the god Apollo to where she would always be able to accurately receive prophecies, but no one would ever believe what she told them–and I can only imagine unbelievably infuriating that would be. I loved getting a more multi-dimensional view of Cassandra, as I've always found her a very sympathetic and intriguing character.
Elektra herself was surprisingly the most difficult character for me to connect with in this book and I have to say I really didn’t care for her or her portrayal. I found her very close-minded and difficult to connect with at times, but I did understand her headspace and her choices that were necessary for the myth and was relevant in the myth as well.
Saint’s writing is incredibly thoughtful and quiet, but still very powerful. We really got to hear each character's unique voice, no matter how big or small their role was. Her prose is vivid and thorough, but not overdone in conveying the many events of this myth story that range from the traumatic and tragic to the loyalty between family and long family curses. There’s a very lovely simplicity about it that I think lended itself to the story really well, and I appreciated that it followed the myth fairly closely in the areas she chose to include. I didn’t end up connecting with Elektra to the same extent that I did Ariadne, but I think that’s solely due to my own interest level and how much I loved Ariadne and the minotaur story and I really liked and appreciated the story within Elektra and had a great time reading it.
This is a beautiful and heartbreaking story of grief, tragedy, power, betrayal, and family. Overall, I've given Elektra four stars! If you are at all interested in Greek mythology, tales of fascinating women, and/or books in the same vein as Circe and Ariadne, then Elektra is a book that should definitely be on your radar.

Jennifer Saint is a Sunday Times bestselling author. Her debut novel, ARIADNE, was shortlisted for Waterstones Book of the Year 2021 and was a finalist in the Goodreads Choice Awards Fantasy category in 2021. Her second novel, ELEKTRA, comes out in 2022 and is another retelling of Greek mythology told in the voices of the women at the heart of the ancient legends.(from Goodreads)