Can't-Wait Wednesday: The Martyr by Anthony Ryan, Juniper & Thorn by Ava Reid, & The Rise and Reign of the Mammals by Steve Brusatte 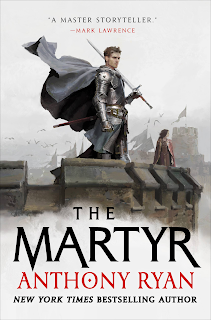 From Goodreads:
"The Martyr is the second novel in The Covenant of Steel, a new epic fantasy series of action, intrigue and magic from Anthony Ryan, a master storyteller who has taken the fantasy world by storm.
Times have changed for Alwyn Scribe. Once an outlaw, he’s now a spymaster and sworn protector of Lady Evadine Courlain, whose visions of a demonic apocalypse have earned her the fanatical devotion of the faithful.
Yet Evadine’s growing fame has put her at odds with both Crown and Covenant. As trouble brews in the kingdom, both seek to exploit her position for their own ends.
Sent to the Duchy of Alundia to put down a rebellion, Alwyn must rely on old instincts to fight for his new cause. Deadly feuds and ancient secrets are laid bare as war erupts, a war that will decide the fate of the Kingdom of Albermaine and, perhaps, prevent the coming of the prophesied Second Scourge."
I really enjoyed the first book, The Pariah, and have been really eager to continue Alwyn Scribe's journey. And seeing this book reminds me yet again that I need to read more of Anthony Ryan's books in general!
and... 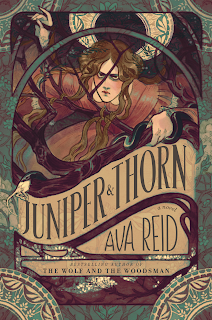 From Goodreads:
"From highly acclaimed bestselling author Ava Reid comes a gothic horror retelling of The Juniper Tree, set in another time and place within the world of The Wolf and the Woodsman, where a young witch seeks to discover her identity and escape the domination of her wizard father, perfect for fans of Shirley Jackson and Catherynne M. Valente.
A gruesome curse. A city in upheaval. A monster with unquenchable appetites.
Marlinchen and her two sisters live with their wizard father in a city shifting from magic to industry. As Oblya’s last true witches, she and her sisters are little more than a tourist trap as they treat their clients with archaic remedies and beguile them with nostalgic charm. Marlinchen spends her days divining secrets in exchange for rubles and trying to placate her tyrannical, xenophobic father, who keeps his daughters sequestered from the outside world. But at night, Marlinchen and her sisters sneak out to enjoy the city’s amenities and revel in its thrills, particularly the recently established ballet theater, where Marlinchen meets a dancer who quickly captures her heart.
As Marlinchen’s late-night trysts grow more fervent and frequent, so does the threat of her father’s rage and magic. And while Oblya flourishes with culture and bustles with enterprise, a monster lurks in its midst, borne of intolerance and resentment and suffused with old-world power. Caught between history and progress and blood and desire, Marlinchen must draw upon her own magic to keep her city safe and find her place within it."
I adore the sound of this story and think it sounds right up my alley–I mean, a gothic horror retelling? Yes, please! The Shirley Jackson and Catherynne M. Valente comparison also really intrigues me.
and... 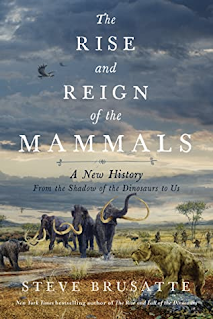 The Rise and Reign of the Mammals: A New History, from the Shadow of the Dinosaurs to Us by Steve Brusatte
Publication: June 7th, 2022
Mariner Books
Hardcover. 528 pages.
Pre-order: Amazon | Bookshop.org

From Goodreads:
"A sweeping and revelatory new history of mammals, illuminating the lost story of the extraordinary family tree that led to us
Though humans claim to rule the Earth, we are the inheritors of a dynasty that has reigned over the planet for nearly 66 million years, through fiery cataclysm and ice ages: the mammals. Our lineage includes saber-toothed tigers, woolly mammoths, armadillos the size of a car, cave bears three times the weight of a grizzly, clever scurriers that outlasted Tyrannosaurus rex, and even other types of humans, like Neanderthals. Indeed humankind and many of the beloved fellow mammals we share the planet with today--lions, whales, dogs--represent only the few survivors of a sprawling and astonishing family tree that has been pruned by time and mass extinctions. How did we get here?
In his acclaimed bestseller The Rise and Fall of the Dinosaurs, American paleontologist Steve Brusatte enchanted readers with his definitive his - tory of the dinosaurs. Now, picking up the narrative in the ashes of the extinction event that doomed T-rex and its kind, Brusatte explores the remarkable story of the family of animals that inherited the Earth--mammals-- and brilliantly reveals that their story is every bit as fascinating and complex as that of the dinosaurs.
Beginning with the earliest days of our lineage some 325 million years ago, Brusatte charts how mammals survived the asteroid that claimed the dinosaurs and made the world their own, becoming the astonishingly diverse range of animals that dominate today's Earth. Brusatte also brings alive the lost worlds mammals inhabited through time, from ice ages to volcanic catastrophes. Entwined in this story is the detective work he and other scientists have done to piece together our understanding using fossil clues and cutting-edge technology."
I really loved Steve Brusatte's The Rise and Fall of the Dinosaurs and now I'm really excited to see a new book from him, especially since it's a book all about the history of mammals. I think this sounds really fascinating!
What do you think about these upcoming releases? What are your anticipated upcoming releases?
Posted by Jordan @ForeverLostinLiterature at 8:32 AM