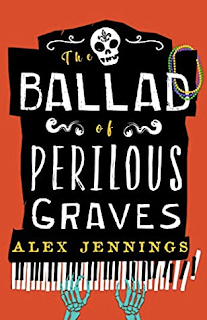 From Goodreads:
"Music is magic in this vibrant and imaginative debut novel set in a fantastical version of New Orleans: a battle for the city's soul brews between two young mages, a vengeful wraith, and one powerful song.
Nola is a city full of wonders. A place of sky trolleys and dead cabs, where haints dance the night away and Wise Women help keep the order. To those from Away, Nola might seem strange. To Perilous Graves, it’s simply home.
In a world of everyday miracles, Perry might not have a talent for magic, but he does know Nola’s rhythm as intimately as his own heartbeat. So when the city’s Great Magician starts appearing in odd places and essential songs are forgotten, Perry realizes trouble is afoot.
Nine songs of power have escaped from the piano that maintains the city’s beat, and without them, Nola will fail. Unwilling to watch his home be destroyed, Perry will sacrifice everything to save it. But a storm is brewing, and the Haint of All Haints is awake. Nola’s time might be coming to an end."
This sounds unbelievably quirky and vibrant and I haven't the slightest idea what to expect. I have an ARC of this lined up and can't wait to dive in and check it out!
and... 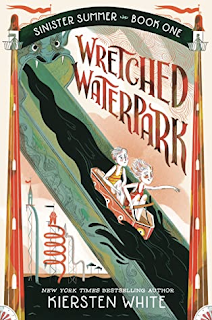 From Goodreads:
"Meet the Sinister-Winterbottoms: brave Theo, her timid twin, Alexander, and their older sister, Wil. They're stuck for the summer with their Aunt Saffronia, who doesn't know how often children need to eat and can't use a smartphone, and whose feet never quite seem to touch the floor when she glides--er--walks.
When Aunt Saffronia suggests a week pass to the Fathoms of Fun Waterpark, they hastily agree. But the park is even stranger than Aunt Saffronia. The waterslides look like gray gargoyle tongues. The employees wear creepy black dresses and deliver ominous messages. An impossible figure is at the top of the slide tower, people are disappearing, and suspicious goo is seeping into the wave pool.
Something mysterious is happening at Fathoms of Fun, and it's up to the twins to get to the bottom of it. The mystery, that is. NOT the wave pool. Definitely NOT the wave pool. But are Theo and Alexander out of their depth?"
I'm really excited about both of Kiersten White's upcoming releases, and especially this new middle grade! This sounds so fun and weird and I am totally here for it.
and... 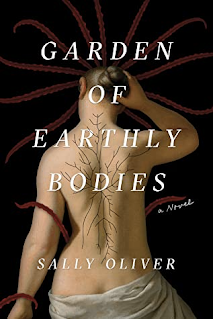 From Goodreads:
"An exquisitely eerie and unsettling speculative novel that grapples with questions of trauma, identity, and the workings of memory
Months after her sister’s death, Marianne wakes up to find a growth of thick black hairs along her spine. They defy her attempts to remove them, instead proliferating, growing longer. The hairs, Marianne’s doctor tells her, are a reaction to trauma, developed in the wake of the loss of her sister, Marie. Her doctor recommends that Marianne visits Nede, a modern, New Age rehabilitation center in a remote forest in Wales where the patients attend unorthodox therapy sessions and commune with nature.
Yet something strange is happening to Marianne and the other patients at Nede: a metamorphosis of a kind. As the hairs on her back continue to grow, the past starts to entangle itself with the present and the borders of her consciousness threaten to disintegrate. She finds herself drawn back compulsively to the memory of Marie, obsessing over the impulse that drew her sister toward death and splintered her family apart. As Marianne’s memories threaten to overwhelm her, Nede offers her release from this cycle of memory and pain—but only at a terrible price: that of identity itself.
Haunting, lyrical, and introspective, Garden of Earthly Bodies is a startlingly accomplished and original debut about the bond between two sisters, love and its limits, and our inability to ever truly to know the minds of others. With an intense and precise attention to the internal workings of minds and bodies and a disturbing speculative plot, the novel welcomes an assured new voice to the genre."
This sounds decidedly weird and I am, once again, totally here for it. This sounds like it will be a very engrossing and slightly bizarre read and I hope to have a chance to check it out!
What do you think about these upcoming releases? What are your anticipated upcoming releases?
Posted by Jordan @ForeverLostinLiterature at 2:00 AM