Can't-Wait Wednesday: Daughter of Redwinter by Ed McDonald, The Clackity by Lora Senf, & In the Shadow of Lightning by Brian McClellan 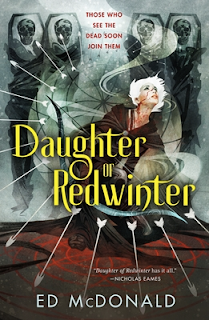 From Goodreads:
"Those who see the dead soon join them.
From the author of the critically-acclaimed Blackwing trilogy comes Ed McDonald's Daughter of Redwinter, the first of a brilliant fantasy series about how one choice can change a universe.
Raine can see--and more importantly, speak--to the dead. It's a wretched gift with a death sentence that has her doing many dubious things to save her skin. Seeking refuge with a deluded cult is her latest bad, survival-related decision. But her rare act of kindness--rescuing an injured woman in the snow--is even worse.
Because the woman has escaped from Redwinter, the fortress-monastery of the Draoihn, warrior magicians who answer to no king and who will stop at nothing to retrieve what she's stolen. A battle, a betrayal, and a horrific revelation forces Raine to enter Redwinter. It becomes clear that her ability might save an entire nation.
Pity she might have to die for that to happen..."
I still haven't finished McDonald's Blackwing trilogy (but I loved the first book), but I'm really curious about Daughter of Redwinter and think it sounds really promising. Excited to check it out!
and... 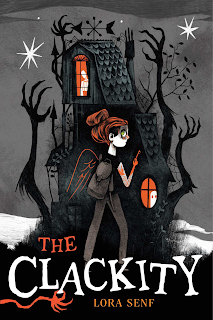 From Goodreads:
"Reminiscent of Doll Bones, this deliciously eerie middle grade novel tells the story of a girl who must enter a world of ghosts, witches, and monsters to play a game with deadly consequences and rescue her aunt.
Evie Von Rathe lives in Blight Harbor—the seventh-most haunted town in America—with her Aunt Desdemona, the local paranormal expert. Des doesn’t have many rules except one: Stay out of the abandoned slaughterhouse at the edge of town. But when her aunt disappears into the building, Evie goes searching for her.
There she meets The Clackity, a creature who lives in the shadows and seams of the slaughterhouse. The Clackity makes a deal with Evie to help get Des back in exchange for the ghost of John Jeffrey Pope, a serial killer who stalked Blight Harbor a hundred years earlier. Evie must embark on a journey into a strange otherworld filled with hungry witches, penny-eyed ghosts, and a memory-thief, all while being pursued by a dead man whose only goal is to add Evie to his collection of lost souls."
There are so many middle grade releases coming out lately that really sound right up my alley! I've actually just finished an ARC of this and I adored it. Can't wait for the final edition to be published!
and... 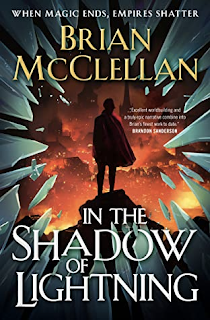 From Goodreads:
"Magic is a finite resource—and it’s running out.
Demir Grappo is an outcast—he fled a life of wealth and power, abandoning his responsibilities as a general, a governor, and a son. Now he will live out his days as a grifter, rootless, and alone. But when his mother is brutally murdered, Demir must return from exile to claim his seat at the head of the family and uncover the truth that got her killed: the very power that keeps civilization turning, godglass, is running out.
Now, Demir must find allies, old friends and rivals alike, confront the powerful guild-families who are only interested in making the most of the scraps left at the table and uncover the invisible hand that threatens the Empire. A war is coming, a war unlike any other. And Demir and his ragtag group of outcasts are the only thing that stands in the way of the end of life as the world knows it."
This feels very reminiscent of more classic fantasy and I'm really looking forward to check it out! I've only read one of McClellan's previous books, but I liked it quite a bit and I hear nothing but good things about his books, so I have high hopes for this one.
What do you think about these upcoming releases? What are your anticipated upcoming releases?
Posted by Jordan @ForeverLostinLiterature at 2:00 AM

Email ThisBlogThis!Share to TwitterShare to FacebookShare to Pinterest
Labels: brian mclellan, cww, daughter of redwinter, ed mcdonald, in the shadow of lightning, lora senf, the clackity