Mini-Review: How High We Go in the Dark by Sequoia Nagamatsu 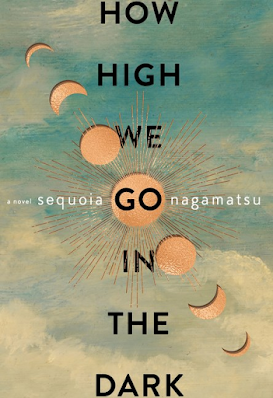 How High We Go in the Dark by Sequoia Nagamatsu
William Morrow
Publication: January 18th, 2022
Hardcover. 304 pages.
About How High We Go in the Dark:
"For fans of Cloud Atlas and Station Eleven, a spellbinding and profoundly prescient debut that follows a cast of intricately linked characters over hundreds of years as humanity struggles to rebuild itself in the aftermath of a climate plague—a daring and deeply heartfelt work of mind-bending imagination from a singular new voice.
Beginning in 2030, a grieving archeologist arrives in the Arctic Circle to continue the work of his recently deceased daughter at the Batagaika crater, where researchers are studying long-buried secrets now revealed in melting permafrost, including the perfectly preserved remains of a girl who appears to have died of an ancient virus.
Once unleashed, the Arctic Plague will reshape life on earth for generations to come, quickly traversing the globe, forcing humanity to devise a myriad of moving and inventive ways to embrace possibility in the face of tragedy. In a theme park designed for terminally ill children, a cynical employee falls in love with a mother desperate to hold on to her infected son. A heartbroken scientist searching for a cure finds a second chance at fatherhood when one of his test subjects—a pig—develops the capacity for human speech. A widowed painter and her teenaged granddaughter embark on a cosmic quest to locate a new home planet.
From funerary skyscrapers to hotels for the dead to interstellar starships, Sequoia Nagamatsu takes readers on a wildly original and compassionate journey, spanning continents, centuries, and even celestial bodies to tell a story about the resiliency of the human spirit, our infinite capacity to dream, and the connective threads that tie us all together in the universe."
How High We Go in the Dark was a book that I and been anticipating for month before it's release and now that I've finally had a chance to read it, it's hard to describe just how much this book exceeded my expectations. This was an absolutely beautiful book. How High We Go in the Dark is centered around the fallout after the melting Arctic releases a virus that devastates the world and explores how the virus has affected a variety of people and societies from different walks of life and situations. This is very much a story about and that explores death and grief, which made it much more emotional and intense than I anticipated, but in the best way possible.

How High We Go in the Dark is a novel that reads more like a series of connected short stories following different people during different points in time after the virus is released and has spread around the globe. We start out in the first story setting at the origin of the virus and spend time with those who were there for it's discovery. We subsequently move along the timeline of the disease and watch how it has affected families, friends, people all over the world, and especially how the world reacts to death.

What I liked: The two things that made me fall in love with this book so much were Nagamatsu's creativity in imagining this future and the different ways he imagines things happening in society; and secondly, Nagamatsu' exploration of grief and loss. I really appreciated how Nagamatsu shared all the different elements of grief and ways in which it can manifest itself. I managed to really find myself connecting with each story and the characters in ways that I didn't always expect, and I think it's really due to Nagamatsu's writing style and ability to craft such compelling characters and stories that made this possible. I also listened to this book as an audiobook with a full cast (a different person narrated each chapter/story) and it was an unbelievably amazing experience–I'd highly recommend the audiobook!

What I didn't like: I honestly can't think of any negatives at the moment. I would say there were definitely stronger and weaker chapters for me, but I didn't really dislike any or think they didn't belong, so it's hard for me to think of any real criticisms. I can see where this book might not be for everyone due to its storytelling format and the different ways Nagamatsu explores the themes previously mentioned, but it's one that I would recommend to anyone.

Overall, I've given How High We Go in the Dark five stars.

Email ThisBlogThis!Share to TwitterShare to FacebookShare to Pinterest
Labels: how high we go in the dark, review, sequoia nagamatsu