Can't-Wait Wednesday: The Book of Gothel by Mary McMyne & Mary: An Awakening of Terror by Nat Cassidy 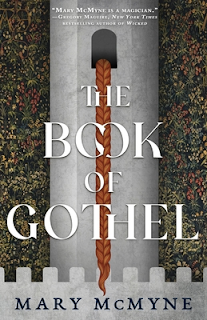 From Goodreads:
"Everyone knows the tale of Rapunzel in her tower, but do you know the story of the witch who put her there?
Haelewise has always lived under the shadow of her mother, Hedda—a woman who will do anything to keep her daughter protected. For with her strange black eyes and even stranger fainting spells, Haelewise is shunned by her medieval village, and her only solace lies in the stories her mother tells of child-stealing witches, of princes in wolf-skins, of an ancient tower cloaked in mist, where women will find shelter if they are brave enough to seek it.
Then, Hedda dies, and Haelewise is left unmoored. With nothing left for her in her village, she sets out to find the legendary tower her mother used to speak of—a place called Gothel, where Haelewise meets a wise woman willing to take her under her wing.
But Haelewise is not the only woman to seek refuge at Gothel. It’s also a haven for a girl named Rika, who carries with her a secret the Church strives to keep hidden. A secret that unlocks a dark world of ancient spells and murderous nobles behind the world Haelewise has always known…"
I love Rapunzel retellings and I don't think we have enough of them! I already read an ARC and I adored it. I can't wait to see it published!
and... 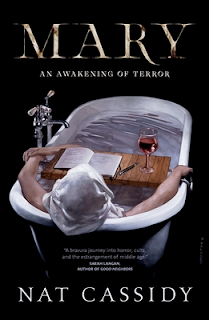 From Goodreads:
"Nat Cassidy’s highly commercial, debut horror novel Mary: An Awakening of Terror, blends Midsommar with elements of American Psycho and a pinch of I'll Be Gone in the Dark.
Mary is a quiet, middle-aged woman doing her best to blend into the background. Unremarkable. Invisible. Unknown even to herself.
But lately, things have been changing inside Mary. Along with the hot flashes and body aches, she can’t look in a mirror without passing out, and the voices in her head have been urging her to do unspeakable things.
Fired from her job in New York, she moves back to her hometown, hoping to reconnect with her past and inner self. Instead, visions of terrifying, mutilated specters overwhelm her with increasing regularity and she begins auto-writing strange thoughts and phrases. Mary discovers that these experiences are echoes of an infamous serial killer.
Then the killings begin again.
Mary’s definitely going to find herself."
This sounds like such a weird horror and I am so here for it!
What do you think about these upcoming releases? What are your anticipated upcoming releases?
Posted by Jordan @ForeverLostinLiterature at 2:00 AM

Email ThisBlogThis!Share to TwitterShare to FacebookShare to Pinterest
Labels: cww, mary mcmyne, mary: an awakening of terror, nat cassidy, the book of gothel