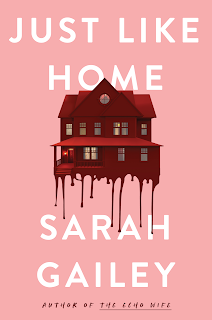 From Goodreads:
"'Come home.' Vera’s mother called and Vera obeyed. In spite of their long estrangement, in spite of the memories -- she's come back to the home of a serial killer. Back to face the love she had for her father and the bodies he buried there.
Coming home is hard enough for Vera, and to make things worse, she and her mother aren’t alone. A parasitic artist has moved into the guest house out back, and is slowly stripping Vera’s childhood for spare parts. He insists that he isn’t the one leaving notes around the house in her father’s handwriting… but who else could it possibly be?
There are secrets yet undiscovered in the foundations of the notorious Crowder House. Vera must face them, and find out for herself just how deep the rot goes."
I'm always curious to see what's next from Sarah Gailey and I'm always a sucker for a weird house setting.
and... 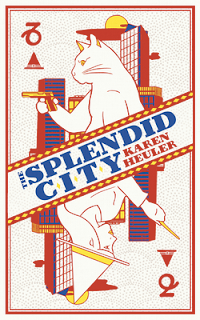 From Goodreads:
"A genre-blending story of modern witchcraft, a police state and WTF characters, for fans of Alice Hoffman and Madeline Miller.
In the state of Liberty, water is rationed at alarming prices, free speech is hardly without a cost, and Texas has just declared itself its own country. In this society, paranoia is well-suited because eyes and ears are all around, and they are judging. Always judging. This terrifying (and yet somehow vaguely familiar) terrain is explored via Eleanor - a young woman eagerly learning about the gifts of her magic through the support of her coven.
But being a white witch is not as easy as they portray it in the books, and she's already been placed under 'house arrest' with a letch named Stan, a co-worker who wronged her in the past and now exists in the form of a cat. A talking cat who loves craft beers, picket lines, and duping and 'shooting' people.
Eleanor has no time for Stan and his shenanigans, because she finds herself helping another coven locate a missing witch which she thinks is mysteriously linked to the shortage of water in Liberty."
I haven't heard anything about this and I love how weird it sounds. I have absolutely no idea what to expect from it, but I'm intrigued and ready!
and... 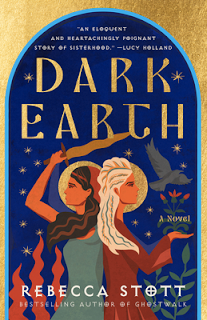 From Goodreads:
"The year is 500 AD. Sisters Isla and Blue live in the shadows of the Ghost City, the abandoned ruins of the once-glorious mile-wide Roman settlement Londinium on the bank of the River Thames. But the small island they call home is also a place of exile for Isla, Blue, and their father, a legendary blacksmith accused of using dark magic to make his firetongue swords—formidable blades that cannot be broken—and cast out from the community. When he dies suddenly, the sisters find themselves facing enslavement by the local warlord and his cruel, power-hungry son. Their only option is to escape to the Ghost City, where they discover an underworld of rebel women living secretly amid the ruins. But if Isla and Blue are to survive the men who hunt them, and protect their new community, they will need to use all their skill and ingenuity—as well as the magic of their foremothers—to fight back.
With an intimate yet cinematic scope, Dark Earth re-creates an ancient world steeped in myth and folklore, and introduces us to unforgettable women who come to vibrant life on the page. A heart-in-mouth adventure full of moments of tenderness, this is a beautiful, profound novel about oppression and power that puts a female perspective on a historical period dominated by men’s stories."
This setting reminds me a bit of Sistersong, which I loved, and this premise sounds so interesting!
What do you think about these upcoming releases? What are your anticipated upcoming releases?
Posted by Jordan @ForeverLostinLiterature at 2:00 AM