Today I'm sharing my stop on the blog tour for the highly anticipated new release The Witch and the Tsar by Olesya Salnikova Gilmore! This story takes place in 16th century Russia and follows a version of the folkloric figure of Baba Yaga like I'd never quite seen her before. Gilmore's writing in this book shines and really makes this a historical fantasy you won't want to miss–and it's out today! The setting, prose, and atmosphere all make this book a perfect fall read. 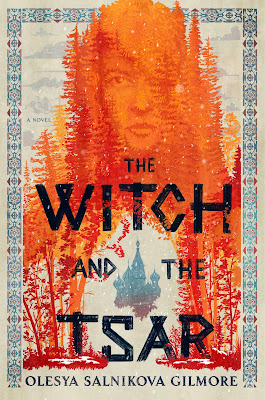 SYNOPSIS:
“In this stunning historical fantasy debut, an isolated witch will risk all that she has to save her country and her people from dangerous gods and the twisted hearts of men.
As a half goddess possessing magic, Yaga is used to living on her own, her prior entanglements with mortals having led to heartbreak. She mostly keeps to her hut in the woods, where those in need of healing seek her out, even as they spread rumors about her supposed cruelty and wicked spells. But when her old friend Anastasia—now the wife of the tsar, and suffering from a mysterious illness—arrives in her forest desperate for her protection, Yaga realizes the fate of all of Russia is tied to Anastasia’s. Yaga must step out of the shadows to protect the land she loves.
As she travels to Moscow, Yaga witnesses a sixteenth-century Russia on the brink of chaos. Tsar Ivan—soon to become Ivan the Terrible—grows more volatile and tyrannical by the day, and Yaga believes the tsaritsa is being poisoned by an unknown enemy. But what Yaga cannot know is that Ivan is being manipulated by powers far older and more fearsome than anyone can imagine."

Early Praise for The Witch and the Tsar:
“An utterly enchanting, wholly immersive debut that deftly reimagines the legend of Baba Yaga. This one is unmissable.”—Alexis Henderson, Author of The Year of the Witching
“A rich and vivid tapestry of old Russia in an age when Tsar Ivan the Terrible grappled not only with political foes but with the legendary witch Baba Yaga and her command of magic and pagan gods.  An evocative journey into old Russian myth and history, and a poignant exploration of what it means to be both human and immortal.”– Margaret George, New York Times bestselling author of The Splendor Before the Dark
“Weaves myth and history into a poignant tale of love and war and gods in the flesh, with impeccable imagery and a heroine whose strength and courage stayed with me long after the final page. Fans of The Witch’s Heart, Circe and The Bear and the Nightingale are sure to fall in love with Gilmore’s compelling debut.” – H.M. Long, Author of Hall of Smoke

Olesya Salnikova Gilmore was born in Moscow, Russia, raised in the U.S., and graduated from Pepperdine University with a BA in English/political science, and from Northwestern School of Law with a JD. She practiced litigation at a large law firm for several years before pursuing her dream of becoming an author. She is most happy writing historical fiction and fantasy inspired by Eastern European folklore. She lives in a wooded, lakeside suburb of Chicago with her husband and daughter. The Witch and the Tsar is her debut novel. Learn more online at www.olesyagilmore.com.
Author photo credit: Nicola Levine Photography, LLC 2021