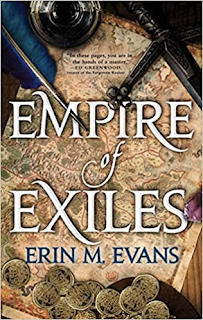 From Goodreads:
"Magic, mystery, and revolution collide in this fantasy epic where an unlikely team of mages, scribes, and archivists must band together to unearth a conspiracy that might topple their empire.
Twenty-seven years ago, a Duke with a grudge led a ruthless coup against the empire of Semilla, killing thousands. He failed. The Duke was executed, a terrifyingly powerful sorcerer was imprisoned, and an unwilling princess disappeared.
The empire moved on.
Now, when Quill, an apprentice scribe, arrives in the capital city, he believes he's on a simple errand for another pompous noble: fetch ancient artifacts from the magical Imperial Archives. He's always found his apprenticeship to a lawman to be dull work. But these aren't just any artifacts — these are the instruments of revolution, the banners under which the Duke lead his coup.
Just as the artifacts are unearthed, the city is shaken by a brutal murder that seems to have been caused by a weapon not seen since the days of rebellion. With Quill being the main witness to the murder, and no one in power believing his story, he must join the Archivists — a young mage, a seasoned archivist, and a disillusioned detective — to solve the truth of the attack. And what they uncover will be the key to saving the empire – or destroying it again."
This sounds like everything I want in a fantasy and more! I've been holding onto an ARC of this and I'm hoping to get to it soon. :)
and... 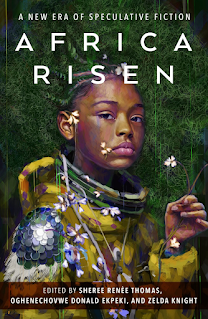 From Goodreads:
"From an award-winning team of editors comes an anthology of thirty-two original stories showcasing the breadth of fantasy and science fiction from Africa and the African Diaspora.
A group of cabinet ministers query a supercomputer containing the minds of the country’s ancestors. A child robot on a dying planet uncovers signs of fragile new life. A descendent of a rain goddess inherits her grandmother’s ability to change her appearance—and perhaps the world.
Created in the legacy of the seminal, award-winning anthology series Dark Matter, Africa Risen celebrates the vibrancy, diversity, and reach of African and Afro-Diasporic SFF and reaffirms that Africa is not rising—it’s already here."
This sounds like an amazing collection and I'm really excited about how many fantastic authors are listed as contributors!
and... 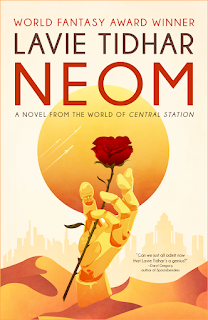 From Goodreads:
"Machines roam the desert in search of purpose; works of art can be deadlier than weapons, and improbable love transcends the sands of time. From the multiaward-winning universe of Central Station, a complex desert-city of the future’s inhabitants rediscover passion while at the brink of revolution.
“Can we just all admit now that Lavie Tidhar’s a genius?” —Daryl Gregory, award-winning author of Spoonbenders
The city known as Neom is many things to many beings, human or otherwise. Neom is a tech wonderland for the rich and beautiful; an urban sprawl along the Red Sea; and a port of call between Earth and the stars.
In the desert, young orphan Saleh has joined a caravan, hoping to earn his passage off-world from Central Station. But the desert is full of mechanical artefacts, some unexplained and some unexploded. Recently, a wry, unnamed robot has unearthed one of the region’s biggest mysteries: the vestiges of a golden man.
In Neom, childhood affection is rekindling between loyal shurta-officer Nasir and hardworking flower-seller Mariam. But Nasu, a deadly terrorartist, has come to the city with missing memories and unfinished business.
Just one robot can change a city’s destiny with a single rose—especially when that robot is in search of lost love."
This feels like it'll be a really vibrant and unique sci-fi that'll explore some really interesting ideas and I can't wait to check it out.
What do you think about these upcoming releases? What are your anticipated upcoming releases?
Posted by Jordan @ForeverLostinLiterature at 2:00 AM