Review: It Rides a Pale Horse by Andy Marino 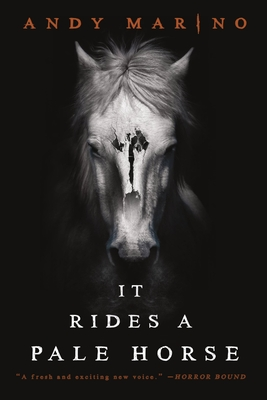 It Rides a Pale Horse by Andy Marino
Redhook
Publication Date: October 4th, 2022
Paperback. 368 pages.
About It Rides a Pale Horse:
"The Larkin siblings are known around the small town of Wofford Falls. Both are artists, but Peter Larkin, Lark to his friends, is the hometown hero. The one who went to the big city and got famous, then came back and settled down. He’s the kind of guy who becomes fast friends with almost anyone. His sister Betsy on the other hand is more… eccentric. She keeps to herself.
When Lark goes to deliver one of his latest pieces to a fabulously rich buyer, it seems like a regular transaction. Even being met at the gate of the sprawling, secluded estate by an intimidating security guard seems normal. Until the guard plays him a live feed: Betsy being abducted in real time.
Lark is informed that she’s safe for now, but her well‑being is entirely in his hands. He's given a book. Do what the book says, and Betsy will go free.
It seems simple enough. But as Lark begins to read he realizes: the book might be demonic. Its writer may be unhinged. His sister's captors are almost certainly not what they seem. And his town and those within it are... changing.
And the only way out is through."

I spent more time than I would like to admit attempting to write a review for this book in a way that was both thorough and not giving away too much... and it was not great. This felt like a very epic horror novel and I think so much of my personal enjoyment came from being completely surprised at almost every step of the way about what was going to happen next, which is how I would also recommend other readers go into it as well. Because of that, this is going to be a mini-review format where I list some general likes and dislikes to give you a good idea of what this book is like, but without the potential for giving away too much. So, let's dive in!

What I liked: I had a lot of moments throughout this book where I found myself wondering, "What the hell did I just read?"–and I loved it. This book is really all over the place in some ways, but it all ties together really well with our story about Peter Larkin (aka 'Lark'), his sister, Betsy Larkin,  and their hometown of Wofford Falls. This story has a ton of different twists and turns, some shocking and dramatic, others more drawn out and done in a slow-burn manner. The story is largely told from Larkin's POV, but we also get occasional 'interludes' littered throughout featuring a rather surprising and somewhat mysterious character. Marino has a masterful way with words and paints incredibly vivid and captivating images throughout, from the awe-inspiring to the somewhat grotesque and disconcerting. I loved following Lark from a relatively comforting small town beginning with colorful characters inhabiting the town of Wofford Falls to a gradual deterioration of sorts of said characters and town... I promise it's worth the ride!

What I didn't like: Things felt a little overly complex and even verbose at times in ways that I felt slowed down the pacing quite a lot. I actually really enjoy horror novels that are slow-paced and take their time with things (think maybe Stephen Chbosky's Imaginary Friend, Chuck Wendig's Book of Accidents, etc.?), but there were a few times, especially at the interludes, where I just wanted thing to move on a little bit. That being said, I appreciated the general slower pace overall and these moments were uncommon enough that I don't have any major complaints about it. Things also sometimes get a little too weird at times for me to follow along as easily, and there were moments where I felt like I had missed something important about the general setting or version of our world we were in. Other than those things, I really didn't dislike too much and enjoyed my time reading this overall!

Overall, I've given It Rides a Pale Horse four stars! I loved Marino's style of writing and can't wait to see what's next from him!

*I received a copy of It Rides a Pale Horse courtesy of the publisher in exchange for an honest review.*
Buy the book: Amazon | Bookshop.org