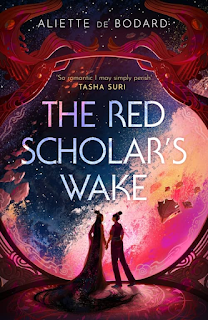 From Goodreads:
"Xích Si: bot maker, data analyst, mother, scavenger. But those days are over now-her ship has just been captured by the Red Banner pirate fleet, famous for their double-dealing and cruelty. Xích Si expects to be tortured to death-only for the pirates' enigmatic leader, Rice Fish, to arrive with a different and shocking proposition: an arranged marriage between Xích Si and herself.
Rice Fish: sentient ship, leader of the infamous Red Banner pirate fleet, wife of the Red Scholar. Or at least, she was the latter before her wife died under suspicious circumstances. Now isolated and alone, Rice Fish wants Xích Si's help to find out who struck against them and why. Marrying Xích Si means Rice Fish can offer Xích Si protection, in exchange for Xích Si's technical fluency: a business arrangement with nothing more to it.
But as the investigation goes on, Rice Fish and Xích Si find themselves falling for each other. As the interstellar war against piracy intensifies and the five fleets start fighting each other, they will have to make a stand-and to decide what kind of future they have together..."
I realized while putting this post together that this appears to be a UK release, just as a head's up to my fellow US readers! This sounds like quite an adventure and I've been meaning to check out more of Aliette de Bodard's work.
and... 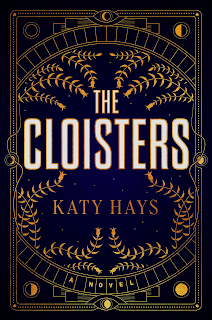 From Goodreads:
"In this “sinister, jaw-dropping” (Sarah Penner, author of The Lost Apothecary) debut novel, a circle of researchers uncover a mysterious deck of tarot cards and shocking secrets in New York’s famed Met Cloisters.
When Ann Stilwell arrives in New York City, she expects to spend her summer working as a curatorial associate at the Metropolitan Museum of Art. Instead, she finds herself assigned to The Cloisters, a gothic museum and garden renowned for its medieval art collection and its group of enigmatic researchers studying the history of divination.
Desperate to escape her painful past, Ann is happy to indulge the researchers’ more outlandish theories about the history of fortune telling. But what begins as academic curiosity quickly turns into obsession when Ann discovers a hidden 15th-century deck of tarot cards that might hold the key to predicting the future. When the dangerous game of power, seduction, and ambition at The Cloisters turns deadly, Ann becomes locked in a race for answers as the line between the arcane and the modern blurs.
A haunting and magical blend of genres, The Cloisters is a gripping debut that will keep you on the edge of your seat."
Everything about this sounds perfect and I'm particularly excited about the fact that we are following some researchers! I'm just loving this premise.
and... 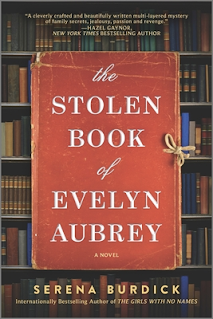 From Goodreads:
"What if you could write a new ending for yourself?
England, 1898. When Evelyn first married the famous novelist William Aubrey, she was dazzled by his brilliance. But their newlywed bliss is brief when William is gripped by writer’s block, and he becomes jealous of Evelyn’s writing talent. When he commits the ultimate betrayal—stealing a draft of her novel and passing it off as his own—Evelyn decides to write her way out of their unhappy marriage.
California, 2006. Abigail always wondered about her father, his identity forever lost when her mother unexpectedly died. Or so Abigail thought, until she stumbled upon his photo and a message that her great-great-grandmother was the author Evelyn Aubrey, leading Abigail on a journey to England in search for answers. There, she learns of Evelyn’s shocking disappearance and how London society believed she was murdered. But from what she uncovers about Evelyn, Abigail believes her brilliant great-great-grandmother had another plot up her sleeve.
Rich in atmosphere and emotion, The Stolen Book of Evelyn Aubrey tells the story of literary secrets, a family curse and the lengths women will go to take charge of their future."
This sounds like a really interesting dual timeline story that's going to have so much mystery to explore and uncover.
What do you think about these upcoming releases? What are your anticipated upcoming releases?
Posted by Jordan @ForeverLostinLiterature at 2:00 AM