Today we have part III in my mini horor reviews series featuring Winterset Hollow by Jonathan Edward Durham! You can find my previous mini horror reviews below:
Part I: Moon of the Crusted Snow by Waubgeshig Rice
Part II: We Can Never Leave this Place by Eric LaRocca 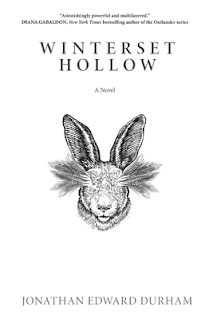 Winterset Hollow by Jonathan Edward Durham
Credo House Publishers
Publication:  September 1st, 2021
Paperback. 286 pages.
About Winterset Hollow:
"Everyone has wanted their favorite book to be real, if only for a moment. Everyone has wished to meet their favorite characters, if only for a day. But be careful in that wish, for even a history laid in ink can be repaid in flesh and blood, and reality is far deadlier than fiction . . . especially on Addington Isle.
Winterset Hollow follows a group of friends to the place that inspired their favorite book-a timeless tale about a tribe of animals preparing for their yearly end-of-summer festival. But after a series of shocking discoveries, they find that much of what the world believes to be fiction is actually fact, and that the truth behind their beloved story is darker and more dangerous than they ever imagined. It's Barley Day . . . and you're invited to the hunt.
Winterset Hollow is as thrilling as it is terrifying and as smart as it is surprising. A uniquely original story filled with properly unexpected twists and turns, Winterset Hollow delivers complex, indelible characters and pulse- pounding action as it storms toward an unforgettable climax that will leave you reeling. How do you celebrate Barley Day? You run, friend. You run."

Winterset Hollows plays with the idea of what would it be like if one of your favorite childhood stories was based on characters that actually existed... but with a dark twist that will probably ruin your childhood forever once you figure it out. When a group of friends travels to Addington Isle, the real location that inspired the setting of Winterset Hollow, to celebrate Barley Day, they discover that things aren't quite what they appeared to be in the book...

What I liked: I really liked how much detail was put into crafting the fictional story within Winterset Hollow and that the author even included small excerpts at the beginning of each new part of the story, which allowed us readers to get a glimpse of what this well-loved childhood story is all about and why the characters are so beloved. I thought the atmosphere of Winterset Hollow was also built up extremely well and incorporated a captivating mix of nostalgia, tension, and a sort of creeping unease that built up as the story progressed. The author also managed to showcase the importance of various elements of the fictional world without overdoing it, and everything felt very subtly done. There's an excellent shift in tone between the beginning and later portions of the novel where things go from sort of endearing and charming and innocent to an almost outright terror and shock at some unexpected violence and discoveries. This book was a weird experience, but an entertaining one!

What I didn't like: I felt that there were portions in the exposition and post-climax parts of the book where things were dragged out just a little too much, which made the pacing drag slightly. There was also something about the characters–largely the secondary characters–that made me keep mixing up who was who. I read the audiobook version, so I'm not sure if it's indicated better in the book, but Winterset Hollow has a sort of omniscient narration style that jumped around to different characters fairly often and left me trying to keep up with what character we were following closely.

Overall, I think Winterset Hollow holds up really well as a short horror novel that contains something a little shocking and terror-inducing for the spooky season!