Horror Mini-Review Pt. I: Moon of the Crusted Snow by Waubgeshig Rice

Since October is the month where I try to read as much horror as I can (I always say this as if I don't read horror at other times of the year, but I really try to pack it in for October, haha!), I've decided that the best way to share some of these reads in the most efficient way possible will be to share occasional mini-reviews highlighting some of my picks. First up today is Moon of the Crusted Snow by Waubgeshig Rice and up next will be Eric LaRocca's We Can Never Leave this Place, with more to come! 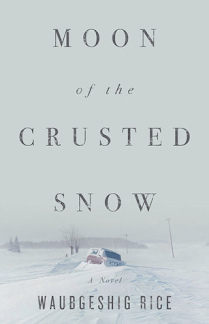 Moon of the Crusted Snow by Waubgeshig Rice

ECW Press
Publication: October 2nd, 2018
Paperback. 213 pages.
About Moon of the Crusted Snow:
"Former child actor Fiona St. James dropped out of the spotlight after a spectacularly public crash and burn. The tabloids called her crazy and self-destructive and said she'd lost her mind. Now in her late twenties, Fiona believes her humiliating past is firmly behind her. She's finally regained a modicum of privacy, and she won't let anything--or anyone--mess it up.
Unlike Fiona, Sam Fox, who played her older brother on the popular television show Birds of California, loves the perks that come with being a successful Hollywood actor: fame, women, parties, money. When his current show gets cancelled and his agent starts to avoid his calls, the desperate actor enthusiastically signs on for a Birds of California revival. But to make it happen, he needs Fiona St. James.
Against her better judgment, Fiona agrees to have lunch with Sam. What happens next takes them both by surprise. Sam is enthralled by Fiona's take-no-prisoners attitude, and Fiona discovers a lovable goofball behind Sam's close-up-ready face. Long drives to the beach, late nights at dive bars... theirs is the kind of kitschy romance Hollywood sells. But just like in the rom-coms Fiona despises, there's a twist that threatens her new love. Sam doesn't know the full story behind her breakdown. What happens when she reveals the truth?"

Moon of the Crusted Snow follows a small Anishinaabe community as the winter season looms and power and access to the outside world are suddenly cut off. The community begins to worry, leaders try to keep peace, and an unexpected visitor causes this community to lose it's grip on order.

What I liked: This was a very slow-burn, creeping sort of horror. As readers, we know there's something off, but nothing really extreme or sudden happens for a while, effectively building up the tension of the story. We don't get much in the way of explanation for what is causing the outages and build-up to this apocalyptic event, which in a way I think highlights the isolation of this community and also, from a storytelling perspective, the isolating elements that fit so well with the horror genre. I loved how much Waubgeshig Rice shared about the culture and lives the Anishinaabe community and how much this affected their experiences and daily life, both before and after things start going haywire. There is such a heavy community presence and cultural influence that I think Rice captured extremely well and that I found really interesting and enlightening.

What I didn't like: Nothing, really! As I mentioned, it's definitely on the slower side which could put some people off, and it's not an obvious outright "horror" full of extreme scares or gore, but rather one that is slowly discerned over time, and I could see this not working for some. There also really isn't much exploration into what caused the so-called apocalyptic event or to what extent is has affected the rest of the world, and although this really contributed to some horror elements, it also felt like there was just something missing with not knowing more.

Overall, I've given Moon of the Crusted Snow four stars! I just discovered that there is apparently going to be a sequel for this book that the author is working on, so I'm very curious about what that will be and will now be eagerly awaiting it's publication. If you're looking for a quieter horror that has a slow build-up that's not overly in-your-face, then I think this would be a perfect choice.