Can't-Wait Wednesday: Wayward by Chuck Wendig, The Vermilion Emporium by Jamie Pacton, & To Each This World by Julie E. Czerneda 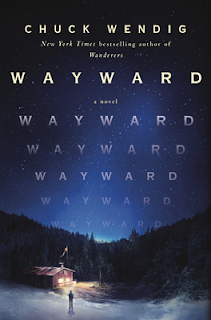 From Goodreads:
"Five years ago, ordinary Americans fell under the grip of a strange new malady that caused them to sleepwalk across the country to a destination only they knew. They were followed on their quest by the shepherds: friends and family who gave up everything to protect them.
Their secret destination: Ouray, a small town in Colorado that would become one of the last outposts of civilization. Because the sleepwalking epidemic was only the first in a chain of events that led to the end of the world--and the birth of a new one.
The survivors, sleepwalkers and shepherds alike, have a dream of rebuilding human society. Among them are Benji, the scientist struggling through grief to lead the town; Marcy, the former police officer who wants only to look after the people she loves; and Shana, the teenage girl who became the first shepherd--and an unlikely hero whose courage will be needed again.
Because the people of Ouray are not the only survivors, and the world they are building is fragile. The forces of cruelty and brutality are amassing under the leadership of self-proclaimed president Ed Creel. And in the very heart of Ouray, the most powerful survivor of all is plotting its own vision for the new world: Black Swan, the A.I. who imagined the apocalypse.
Against these threats, Benji, Marcy, Shana, and the rest have only one hope: one another. Because the only way to survive the end of the world is together."
I loved Wanderers and I've been so eagerly anticipating this sequel! I'm really curious where Wendig will take this storyline. I just got approved for this yesterday after waiting in NetGalley limbo for months, so I'm very excited to read it soon!
and... 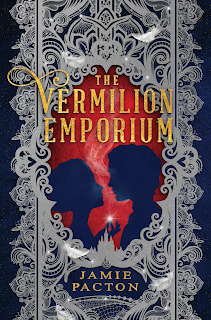 From Goodreads:
"It was a day for finding things . . .
On the morning Twain, a lonely boy with a knack for danger, discovers a strand of starlight on the cliffs outside Severon, a mysterious curiosity shop appears in town. Meanwhile, Quinta, the ordinary daughter of an extraordinary circus performer, chases rumors of the shop, The Vermilion Emporium, desperate for a way to live up to her mother’s magical legacy.
When Quinta meets Twain outside the Emporium, two things happen: One, Quinta starts to fall for this starlight boy, who uses his charm to hide his scars. Two, they enter the store and discover a book that teaches them how to weave starlight into lace.
Soon, their lace catches the eye of the Casorina, the ruler of Severon. She commissions Quinta and Twain to make her a starlight dress and will reward them handsomely enough to make their dreams come true. However, they can’t sew a dress without more material, and the secret to starlight’s origins has been lost for centuries. As Quinta and Twain search the Emporium for answers, though, they discover the secret might not have been lost—but destroyed. And likely, for good reason."
This sounds like an amazing winter read full of magic and great characters!
and... 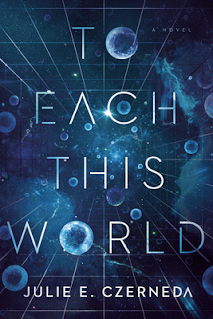 From Goodreads:
"Biologist Julie E. Czerneda's new standalone science fiction novel, To Each This World follows a desperate mission to reconnect with long lost sleeper ships, sent centuries earlier from Earth to settle distant worlds.
A trio of Humans must work with their mysterious alien allies to rescue any descendants they can find on those worlds. Something is out there, determined to claim the cosmos for itself, and only on Earth will Humans be safe.
Or will they?
The challenge isn't just to communicate with your own kind after generations have passed. It's to understand what isn't your kind at all.
And how far will trust take you, when the truth depends on what you are?"
I still haven't read anything from Czerneda and have always heard good things, and I think this sounds like a great place to start! I am really liking the sound of this sci-fi premise.
What do you think about these upcoming releases? What are your anticipated upcoming releases?
Posted by Jordan @ForeverLostinLiterature at 2:00 AM