Today I wanted to make a special post to highlight two fall releases that I'm really excited about: The Restless Dark by Erica Waters and Monster Club by Darrren Aronofsky (yes, that Darren Aronofsky of Requiem for a Dream, one of my favorite movies!) and Ari Handel! I've just finished Monster Club and thought it was such a fun read, overflowing with imagination really great storytelling. It's an amazing Halloween for middle grade readers and adult readers alike. I'll definitely be recommending it to some middle grade readers that I know. :) The Restless Dark is up next!

I'll be sharing some general information about the books below, so be sure to check them out if you're looking for an MG and/or YA spooky fall read! Huge thanks to Leilani Fitzpatrick for sending me copies of these to read! 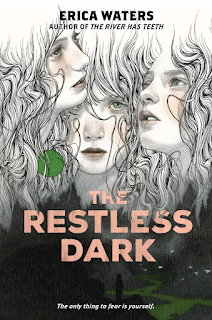 SYNOPSIS:
“Enter Cloudkiss Canyon at your own risk.
The Cloudkiss Killer is dead. Now a true-crime podcast is hosting a contest to find his bones.
Lucy was almost the serial killer’s final victim. Carolina is a true-crime fan who fears her own rage. Maggie is a psychology student with a little too much to hide.
All of them are looking for answers, for a new identity, for a place to bury their secrets.
But there are more than bones hiding in the shadows…sometimes the darkness inside is more frightening than anything the dead leave behind.
Perfect for fans of Sadie and Wilder Girls, this newest novel from Erica Waters follows three girls at a true-crime contest to find the bones of a lost killer—even as a mysterious force pulls at the contestants’ darkest desires." 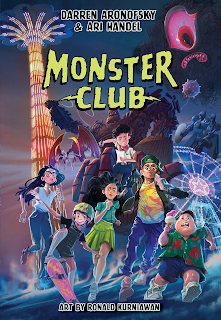 SYNOPSIS:
“From the award-winning screenwriter-director Darren Aronofsky and his screenwriting partner, Ari Handel, comes Monster Club. Their debut novel is the first book in a thrilling, new adventure series about growing up, letting go, and facing down your monsters.
Like almost everything in eleven-year-old Eric "Doodles" King's life, King's Wonderland--the amusement park his great-great grandfather founded--was seriously damaged when a hurricane hit his beloved Coney Island neighborhood. Now hungry property developers are circling the wreckage of the once-awesome King's Wonderland, and Eric's family is falling apart from the threat of losing it all.
If it weren't for Monster Club--the epic roleplaying game that Eric and his friends created--Eric's life would be pretty terrible. Drawing his favorite monster battling with his best friends' creations is the one thing that still gets Eric excited. So when his friends start to think of Monster Club as a kid's game and get more interested in other things, Eric just can't deal. But then Eric happens across a long-lost vial of magic ink that brings their monster drawings to life, and suddenly, Monster Club isn't just for fun anymore.
The monsters Eric and his friends created are wreaking havoc across Coney, and it's on the Monster Club to save their city, the amusement park, and maybe, just maybe, Eric's family, too. It's a hilarious, heartfelt adventure from the creative minds of Darren Aronofsky and Ari Handel that fans of Last Kids on Earth and Spy School are sure to love."