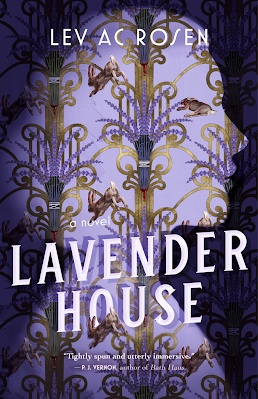 Lavender House by Lev AC Rosen
Forge Books
Publication Date: October 18th, 2022
Hardcover. 288 pages.
About Lavender House:
"Lavender House, 1952: the family seat of recently deceased matriarch Irene Lamontaine, head of the famous Lamontaine soap empire.
Irene’s recipes for her signature scents are a well guarded secret―but it's not the only one behind these gates. This estate offers a unique freedom, where none of the residents or staff hide who they are. But to keep their secret, they've needed to keep others out. And now they're worried they're keeping a murderer in. Irene’s widow hires Evander Mills to uncover the truth behind her mysterious death.
Andy, recently fired from the San Francisco police after being caught in a raid on a gay bar, is happy to accept―his calendar is wide open. And his secret is the kind of secret the Lamontaines understand. Andy had never imagined a world like Lavender House. He's seduced by the safety and freedom found behind its gates, where a queer family lives honestly and openly. But that honesty doesn't extend to everything, and he quickly finds himself a pawn in a family game of old money, subterfuge, and jealousy―and Irene’s death is only the beginning.
When your existence is a crime, everything you do is criminal, and the gates of Lavender House can’t lock out the real world forever. Running a soap empire can be a dirty business."

I had a feeling Lavender House was going to be a hit for me, but I had no idea how much I was going to love it until I read the first page and was immediately hooked. I flew threw the rest of the book and was so sad to say goodbye to all of these incredible characters!

Lavender House is set in 1952 San Francisco and features a very classic detective murder mystery premise with a very queer twist. Evander Mills, known as "Andy," is a former cop who has recently been fired from his job after he is discovered at a gay bar in a rather compromising position. He is eventually recruited by the widow of Irene Lamontaine, head of the Lamontaine "soap empire" to investigate the death of Irene herself, a task that proves trickier than he anticipated when he learns that it was most likely done by someone living in the house.

The Lamontaines are a very colorful cast of characters, each with an incredibly unique personality that is highlighted throughout the story in various ways. Lavender House has some wonderful LGBTQ+ representation and all of the characters are well-developed and given interesting personalities and backstories, all of which are done with respect and great care. Everyone in this house lives openly and proud to be who they are, a sharp contrast to how much they have to hide themselves from the outside world when in public.

I really liked Andy as a protagonist. I appreciated his forthrightness and blunt honesty when doing his job. He's not the most outgoing person or anything, but he knows when he has a job to do, how to do it, and he does it well. He doesn't cut anyone in the Lamontaine household any slack no matter who they are what their relationship to Irene was, which I think showed his commitment to being a detective and always searching for the truth. I don't know if this book is going to have any sequels, but if it does I can definitely see Andy being a great protagonist detective to carry on the story.

In addition to Andy, we have a household full of characters, as previously mentioned, and I loved seeing Andy's interacts with them because they are all so different. Some of them are rather prickly and not exactly the easiest to get to know or trust, but they all have something driving them that you can see in their actions and concerns. Everyone has their own secrets and has their own reason for keeping their secrets, and I think Andy (and the rest of the characters) understands this and does his best to get the truth that he needs from each character without overstepping. Everyone also has their own potential motive for being someone who could have killed Irene, so it was interesting to see how Andy navigated that and how various household members reacted to being questioned and seeing those around them as potential suspects. The pacing of Lavender House was excellent. Rosen laid out tiny hints and leads (and false leads!) throughout that made this plot flow incredibly well and made it hard for me to put this book down.

As much as there is a huge murder mystery at play at the center of this story, it's didn't really feel like the murder mystery was the point of Lavender House, if that makes sense. It really felt more like this was a sort of character exploration and also focused on Andy and him coming to terms  with how his life has just drastically changed after losing his job, as well as his own reflections on how he's lived his life up until this point, especially after meeting the Lamontaines and comparing his own life to how he sees the people in this house living their own lives. It's this that I think really makes this such a compelling story. The murder mystery is definitely great and takes us into a variety of different scenarios where Andy is investigating and things happens and he has to question people, but for me it just wasn't necessarily the overall focus, and that worked perfectly for the story.

This was such a captivating, fun, and even emotional read at times. I was absolutely hooked and genuinely loved getting to know each member of this rather quirky household. As mentioned, I have no idea if there's going to be a sequel, but I would absolutely read it if there was and would love to revisit all of these characters and see what going on in their lives. This is a somewhat tumultuous time in San Francisco and it's only going to get moreso as the time period progress. I ended up giving Lavender House five stars! I really had an amazing time with this book and look forward to reading more from Lev AC Rosen.

*I received a copy of Lavender House courtesy of the publisher in exchange for an honest review.*