Can't-Wait Wednesday: Lost in the Moment and Found by Seanan McGuire & What Lies in the Woods by Kate Alice Marshall

This week, we're diving in early to take a peek at some of January's upcoming releases!
This week's upcoming book spotlights are: 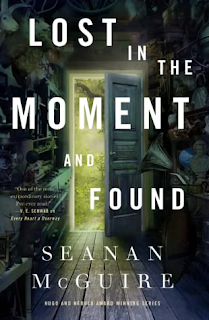 From Goodreads:
"Welcome to the Shop Where the Lost Things Go.
If you ever lost a sock, you’ll find it here.
If you ever wondered about favorite toy from childhood... it’s probably sitting on a shelf in the back.
And the headphones that you swore that this time you’d keep safe? You guessed it….
Antoinette has lost her father. Metaphorically. He’s not in the shop, and she’ll never see him again. But when Antsy finds herself lost (literally, this time), she finds that however many doors open for her, leaving the Shop for good might not be as simple as it sounds.
And stepping through those doors exacts a price.
Lost in the Moment and Found tells us that childhood and innocence, once lost, can never be found."
I have found that the books in this series can be a little hit or miss sometimes at this point, but I'm always so excited to read the new installments, and Lost in the Moment and Found sounds very promising! I love diving into McGuire's seemingly boundless imagination.
and... 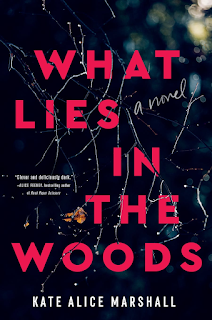 From Goodreads:
"They were eleven when they sent a killer to prison . . . They were heroes . . . but they were liars.
Naomi Shaw used to believe in magic. Twenty-two years ago, she and her two best friends, Cassidy and Olivia, spent the summer roaming the woods, imagining a world of ceremony and wonder. They called it the Goddess Game. The summer ended suddenly when Naomi was attacked. Miraculously, she survived her seventeen stab wounds and lived to identify the man who had hurt her. The girls’ testimony put away a serial killer, wanted for murdering six women. They were heroes.
And they were liars.
For decades, the friends have kept a secret worth killing for. But now Olivia wants to tell, and Naomi sets out to find out what really happened in the woods—no matter how dangerous the truth turns out to be."
I've really enjoyed what I've read from Kate Alice Marshall so far, and although I'm behind on a couple of her releases, I'm really looking forward to this one now as well!
What do you think about these upcoming releases? What are your anticipated upcoming releases?
Posted by Jordan @ForeverLostinLiterature at 2:00 AM